An illustration about Chicory while discovering the Chaosah Black Hole. She is a young witch who founded Chaosah magic decades before the main story of Pepper&Carrot.

"She was a curious witch, and loved to tinker with magic. One night she was playing around and happened upon the "Chaosah Black Hole" spell (which is a signature spell for all Chaosah witches). She named her magic "Chaosah" because she felt she was channeling the chaos of Hereva in order to perform her magical incantations. Her discoveries caught the attention of other like-minded witches and she taught them what she had learned. Eventually more students arrived and Chicory found herself spending every waking moment teaching students."

...sample from The Pepper&Carrot Wiki wrote by Craig Maloney

I'm still testing new Krita brushes (click on the artwork for full 3K width resolution). I'm also testing a new workflow for rendering better artwork. By better I mean my taste of the moment shifted to more traditionnal oil painting texture and a focus on light, shading, almost raytracing from imagination. I find a real pleasure at that. I rendered this old sketch of Chicory as a test to play with that. This sketch with no background, a single strong point light appeared to be what I needed.

Once I'll feel more confident with this techniques; I'll use them to finish the cover of the book project (still in work in progress because I wasn't happy with the brush work and flat texture) and also to design a story for episode 31 that take advantage of this type of rendering maybe. 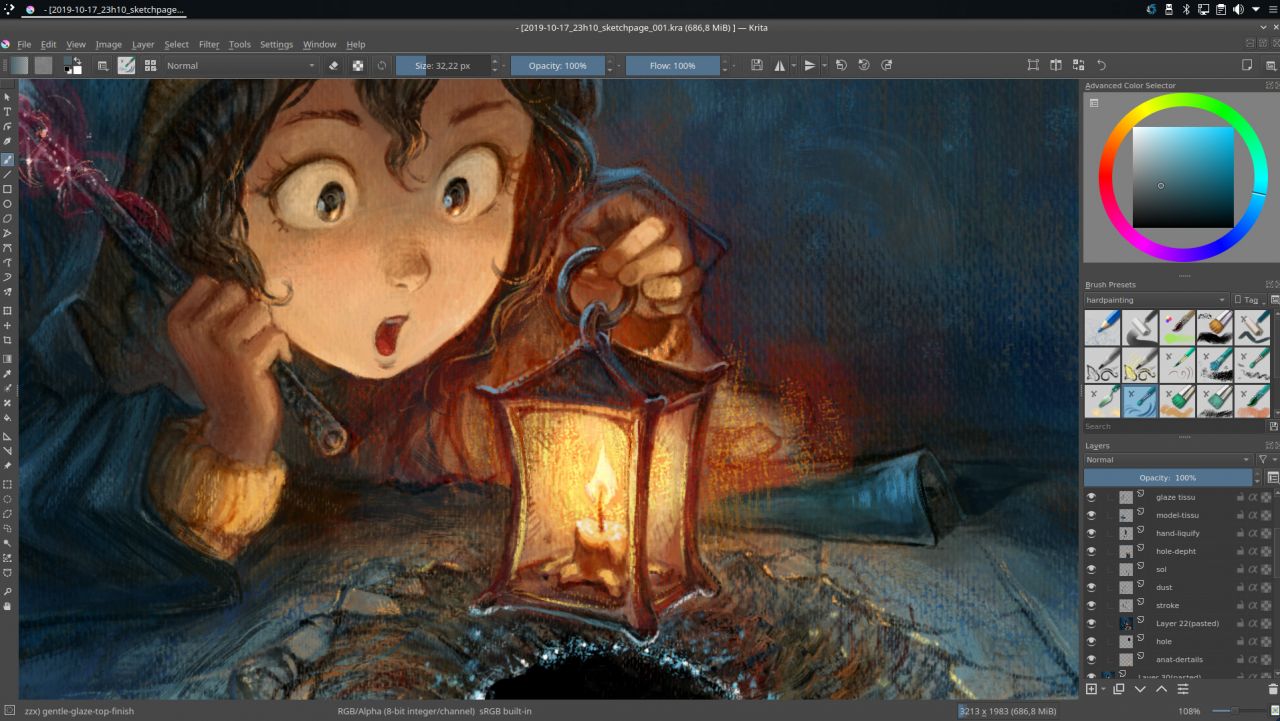 Next post
License: CC BY
David Revoy, www.davidrevoy.com, 18 october 2019.
Unless otherwise mentioned in the article.

I never played Fortnite; it has a black hole?

I was expecting a picture referencing the black hole photo again :3

I really love this one. The paint-like texture really brings this one to live. There is a lot of dynamics where the black hole opens and the tiles crack and morph. It is really like the sensation of surprise in her eyes increases as the hole opens. And then you have the fine sparkle at the tip of her wand as something in a different dimension simply because it seems like something that can just not be done like that with oil paint.

Just not that sure about the anatomy of her left hand. If she holds her thumb like that she probably can't keep hold of that latern... if it weren't for magic ;).

Thank you for the detailed and beautiful comment. This technique force me to use new way to simulate light (rubbing the canvas with a texture around point light to simulate halo, and not using a digital hairbrush and get a perfect halo with a blending mode that enlight the canvas automatically). I also think this voluntary way to interpret the effect with a media, and not reproducing the effect with digital tools benefits the artwork. I'm learning a lot of new things, or re-learn a lot of things I did when I was deeper into concept art and digital painting.

You are totally right about her hand. I really need to pay more attention to this.