ViewConference 2011 is now over , and I'm back home in my studio in Toulouse, France. But let me come back on what happened the last days to complete and conclude on what I already wrote on the first part.

The last workshop was on Friday morning , a 2h one. We started with the idea to do a landscape. And as we did in the 2 previous workshops ; I asked again to the participants to choose with putting their hand up to vote the theme. Votes where organised between simple choices as 'cold and warm' or 'happy/cute or sad/dark'...etc.... Always fun and creative to start finding a collective theme like this :)

We ended with a Cold foggy Swamp .

After a basic presentation about myself , a speed presentation of open-sources softwares and the little vote process for the theme, my time still remaining for the demo was a bit less than 1h20. But I felt enough confident to introduce a speed thumbnail study on Mypaint, and a workflow as I teach in my open workshop Dvd 'Blend&Paint' including the use of 3D with Blender.

Here are some pictures of the progress, and the 'final'. 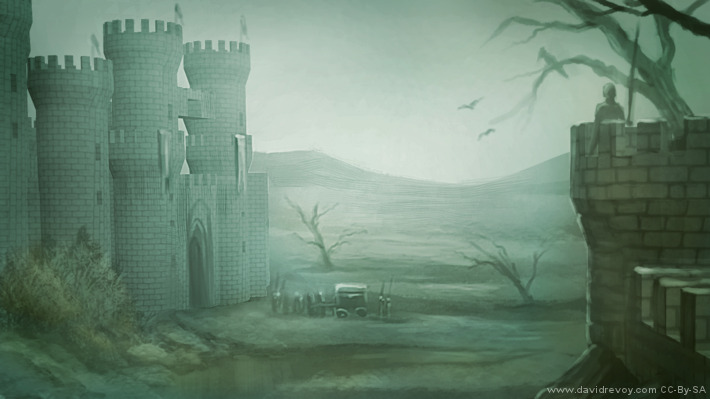 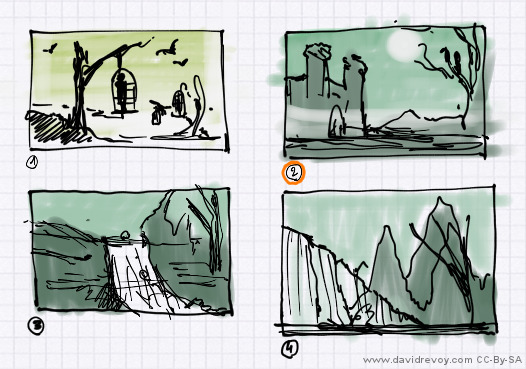 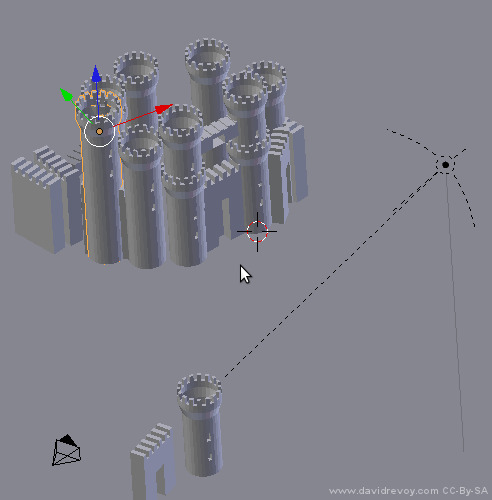 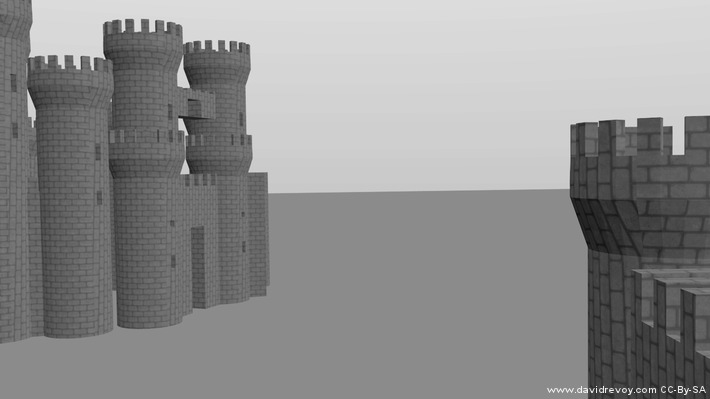 Meeting who influencate myself for sure :

Let me introduce the meetings who influencate the most my way of thinking and the little details concerning their relation with open-source softwares ( yep, this blog is about digital painting and open-source , I try to keep 'on topic' )

Corry Doctorow : Science fiction novelist, co-editor of the popular weblog Boing Boing , and technology activist Ubuntu user :) it was unexpected to talk about the last Unity problems with him.Corry knows also really well all about licenses, and how the open-source cultures evolve. Cool to discuss on the diner table about Git/Svn management of data, and how open source project use it online. Peter Nofz : Digital Effects Supervisor – Sony Pictures Imageworks, GREEN LANTERN As most workers on AAA Vfx industry, Peter is a Linux user of course ( run internal or proprietary softwares on the top ) By the way, I wasn't enough lucid cause of the good wine curious to ask the distribution. Earing about his work on the super-vilain of Green Lantern movie and experience in general was really cool. ( also read here his impressive filmography )

Tom Wujek _Autodesk Fellow, Author, Singularity University Professor , Visual thinking guru and award-winning innovator I couldn't resist to ask him about the "Don't blend in, stand out !" marketing message at Siggraph 2011 on Autodesk booth. Even if he had no real or sure informations about that, we had a great discution and he said me it sounded to him more than a simple wink against the famous Blender 3d open-source software. By the way, Tom did the most mind-blowing presentation, I'm very happy to had saw it in Viewconference version 'live' and share some laught and diners at same table. ( Watch one of his great talk on TED here )

Erminio Pinque : Creature fabricator / performer and Director: BIG NAZO LAB, Instructor RISD I had the honnor to see him coming to a part of my workshop. Erminio is certainly the most creative and hight colored mind I met during the ViewConference. I also saw a part of his very interactive workshop about creature design. ( video documentary on Youtube about him here )

Peter Lundholm : Software teacher at Umeå Institute of Design Peter was last year at my talks on the main room and it was a present to know during last year he introduced Mypaint and infinite canvas to his student. Very cool. Peter is really a great personality to have on a diner , has so many interresting observations and smart informations on culture and softwares evolutions.
Note : I don't introduce here about Enrico Valenza , Sebastian König, Top-ix team as I introduced them on the last blog post about viewconf.

During Viewconference , I kept sketching poeple at table when I could (between 2 plates) , I also did plenty of other pages of my sketchbook, but they are about next artworks, so I'll not show them now here. ( see at the top for artworks )

Thanks again to all participant of my workshop , and also to the really cool team of organizators, it was a very good Viewconference 2011. Hope to have the possibiltiy to be on the next one !

Next post
License: CC BY
David Revoy, www.davidrevoy.com, 30 october 2011.
Unless otherwise mentioned in the article.

Hi man, Nice to see so productive. I like the sketch in B/W ink. very well done to be a fast sketch. it has to be wonderful to stay in Italy and enjoy the people and places. Thanks for sharing all these last posts, really nice.

@Ramon Miranda : Thanks, It was wonderfull, and I couldn't unfortunately spend more time doing sketching to all amazing things I saw in this city. Also it was cool to come back to a traditional sketchbook during this week.

Watching your sketchbook made me remember the project Freestyle.

Just for curiosity: have you ever tried blender with freestyle?

I'm trying to find some tutorials, but there isn't too much stuff around.

@Marco : Thanks Marco. Yep, I studied a lot Freestyle 'shaders' in my early blender days. I lost a bit the scope of it since Sintel, but I should watch again how the project grow. I'm always more far attracted by non realistic rendering than by photo realistic stuff