I'm writing from the ViewConference in Turin ( Italia ) , one of the biggest event about Visual Effect and Computer graphics in Europe where I have the luck to get 3 workshop ( 2h , 6h and 2h ) only Open Source Digital painting with Mypaint / Gimp-painter and Krita.

First very cool surprise : in all printed materials of the ViewConference :

You can see it on the top picture ? ((no... not the fact I have a crappy webcam )) in the bubbles around the printed program ; Kung-fu Panda , Tintin, Cars 2 , Tranformer ... and Sintel and Scale. So , I felt very welcome.

Before my first conference, I lunched with Sharon Calahan, Director of Photography/Lighting at Pixar Animation Studios, Tom Wujec from Autodesk , Pam Hogarth, Director of Marketing LOOK Effects and Wayne Stables, visual effects supervisor at Weta Digital for Steven Spielberg’s “The Adventures of Tintin” . They were really friendly and we all had a nice moment talking about our travels, and our futures talks.

Then I started my first workshop of 2h , 30 min of introduction / presentation , and a bit more than an hour of commented demo. Intuos 4 Medium ( my favorite tablet ) were distributed to each participant with a stylus and a driver CD to test during the workshop. Impressive to see so much of Intuos 4 box. Mostly participant were on Windows or Apple PCs, but also a small number of Linux users were around with cool distros.

For the workshop , I asked to participant based on public vote to constrain me with a theme, as real industry and client would do. The result was : Creature 1 : A dragon Creature 2 : Cows Action : Cooking 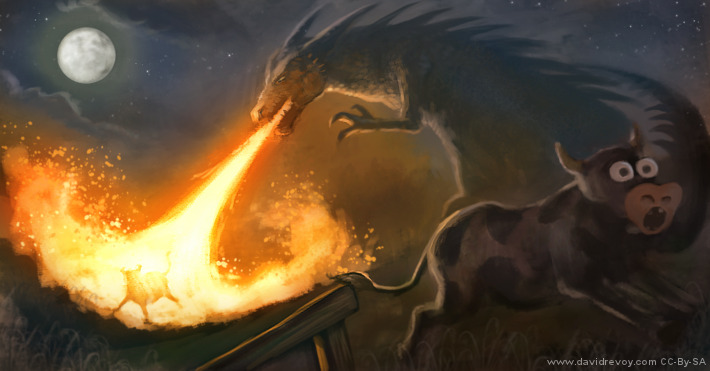 The demo was short , but long enough to introduce tilted camera angle, custom brush , fire effects, starfield , and of course a bit of painting tips in Mypaint , Gimp-painter and Krita.

After the workshop, I had the pleasure to meet on the View corridors Enrico Valenza of the fame of the Big Buck Bunny open-source movie project, as well as Sebastian Koenig of the future Mango open-source project fame. They were both invited via Top-Ix in ViewConf' . I started to talk to Sebastian why Mango team will love Krita, and we found a table to show a demo. They liked it a lot, and as me wish a no-Bug version of this wonderfull software. ( encouragement for the developpers ! ) 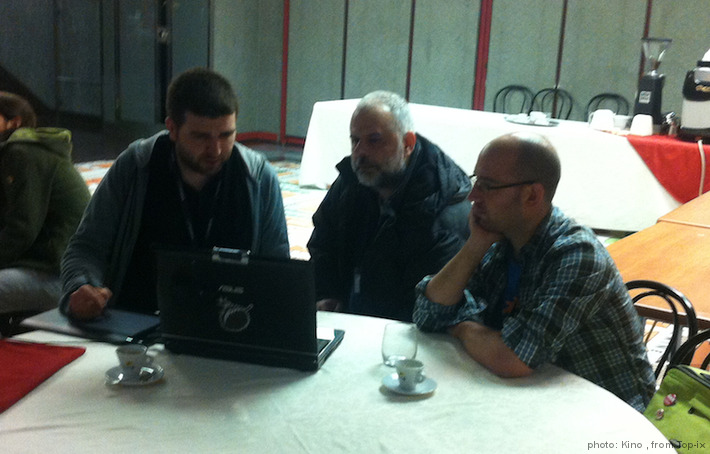 We continued discutions till late ( we got diner together with other friendly Blender artist and Top-ix crew ) about various topics. I also drawed them on my sketchbook during the diner, but I'll wait to have a scanner back from home to post it. ( no, not a second webcam shot ) Today was my biggest workshop : 6h from 9h00 to 15h00 . With this time I could start a more ambitious drawing, with many more parts about specific features, and still many tips and general thought about the workflow. I was really honored to have an overbooked workshop , and a full rooms. First time I got this in a CG event ( if I don't count the Blender Conference ) . As usual , I asked the public for voting the theme.
Character : A girl , with red hair ( oh oh, I had a dragon , now a Sintel like character :-D )
Style : Sci-fi armored
Style for the design : Tiger 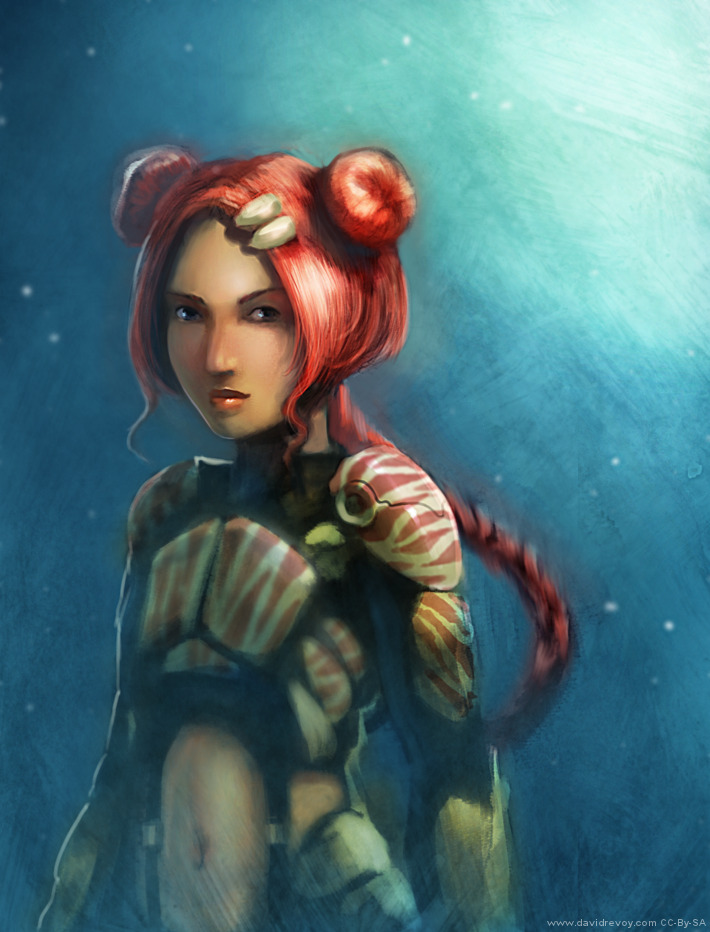 Most of the public of today wasn't knowing Open-source , so I also did an introduction about the overall concept , then I make them visit a bit my Linux Mint 11 system , of course the result above was not covering all the 6 hours , we also did pauses to lunch , and also a lot of explanation on the process with some detailed technics things about coloring, glossy point, textures, focus, facial details... etc... It's really difficult to keep speaking and explaining and keep a good result on the screen ( on a laptop, with 1024x768 screen to adapt to the screen projector resolution ). On friday I still have a workshop open for registration , hope to see many of you there for another moment. I'll blogpost about it on Saturday for sure before come back to Toulouse city. I'll also test the Wacom Cintiq 24HD with the very friendly poeples from the Wacom booth , we all wonder if this one will be 'plug&play' under my LinuxMint 11 system , as it's Intuos 4 based, we guess it should be OK. Tomorow on my free day I will surely try to watch the workshop about Creature Creation of Erminio Pinque, Director of the BIG NAZO International Performance Group and Instructor of “Creature-Creation” at the Rhode Island School of Design Film Animation Video Department. None of my workshop were recorded in Video or Streamed , but some photos may appear here and there about them on next days. Thanks again if you were one of the numberous participant of this workshop today and yesterday.

Next post
26 october 2011.
Unless otherwise mentioned in the article.

lol, that laptop is powered by project Durian. lol

:D I have no words to express my gratitude. Your spirit of creativity is extraordinary:O
It's a real pleasure to follow your workshops:D Thanks for all :D

David, you are doing a great job of spreading the best things about open-source software. I wonder how people react to it.

All I know is that it would be awesome to see more people join the FLOSS "ranks", as then there would be even more sharing and development :D