Retro gaming is a big part of my life. So, when Sylvain Gadrat (aka sgadrat or Roger Bidon) contacted me last week to show the new playable character of his Nes game −Pepper− I had suddenly a large grin like a Cheshire cat and I started to see rainbows. 😺

She was added to Super Tilt Bro, a homebrew open project aiming at porting a "versus platformer fighting" to the 1985 Nes Nintendo console. At that time, this game genre (Super Smash Bros game-like) did not exist, this was invented two console later with the N64. So the goal of the project Super Tilt Bro is to make a NES homebrew project aiming at porting the "versus platformer fighting" to this good old system that made our childhood.

The project is open, source code is on Github, and the game has also other characters like Kiki −the Krita mascot character− as you can see in this character selection screenshot: 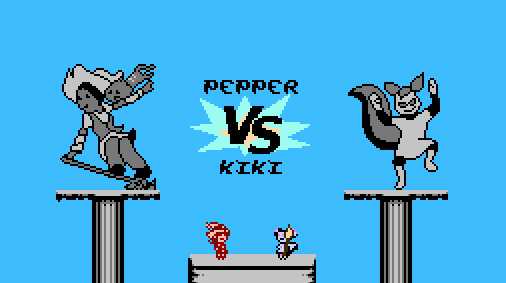 Pepper throw potions, she can put Carrot (with little heart around) to a location and then teleport back, she has spells and a broom to jump even higher. I still have to explore more her moves but I already really like how her fighting style respect the lore of Pepper&Carrot! Here is a video made and published by Sylvain after adding Pepper where you'll see sequences of gameplay with her:

If you want to play, it's easy. Build are available to play directly on Windows or on GNU/Linux, on your Nes emulator (this is what I did, epic with my CRT filter), or directly on a browser. It is free but has a "pay what you think is fair" system starting at 2$ for all the build; a system I like:

Other links to go further:

Next post
License: CC BY
David Revoy, www.davidrevoy.com, 24 may 2021.
Unless otherwise mentioned in the article.

Wow, quite impressive! I also want to put Pepper in a videogame, but doing it on the NES is very hardcode! 0_0

From what I understand, the NES can only display 3 colours in an 8x8 square, plus a 4th colour that represents transparency. Here, Pepper has a 8x16 sprite, ie. two 8x8 squares, but only using 2 colours - it looks like they're saving the 3rd colour (yellow) for the special attacks! Even with 2 colours, it still looks like Pepper. They even squeezed her hat in there! And some animations have her flying on a broom...

However, the most impressive thing... They actually put a WIFI card into a NES game? WTF??? I have no idea how they even began to do that... That's crazy...

Oh yes, the technical challenge sounds huge! I saw documentaries on Youtube about NES game dev; and this limitations are crazy. This is truly a work of passion here; that's why I really like the derivation!
If you ever have a result with Pepper on a video-game; just ping me; as you can see I'm happy to reshare!

¡Very cool and share source code too! I hope many people support it create Mega Drive or Neo Geo version.

this game looks pretty cool. I will try it. I am playing this game if you are also passionate about gaming then play with me: https://geometrydash-best.com