me while unboxing my "sample for author"

I received this morning the third French Pepper&Carrot book printed by the publisher Glénat Editions (one of the largest comic book publisher in France). I'm so happy to have it in my hands after all this time! "The butterfly effect" ("L'effet papillon") is the title of this book that bundle episode 22 to 29 and more than 60 pages of my webcomic Pepper&Carrot. It will be released in France somewhere around next week on 28 August. It took me a lot of time to draw all this pages to feed this book with the help of Krita and Inkscape on my GNU/Linux Kubuntu operating system. Sorry again for the big wait and thank you for your patience. The derivation of Glénat Editions started in 2016 for the book one and the first two books were a success thanks to the audience. I've heard the book were reprinted many times. The series received even a collector bundle with book 1 and 2 for Christmas 2018 (photo under). Even nowadays, I keep seeing the books in the shelves of supermarkets, bookstores, schools and libraries. That's a really cool partnership built with Glénat around the Creative Commons Attribution 4.0 license and a beautiful story.

Well, that was not always the case, especially at the public release of the book one in 2016: my new paradigm for comic wasn't received positively at all by the comic industry (Ref: "L'affaire Pepper&Carrot" -blog post in French- by Phylacterium blog). It was a big fuzz in the specialized press and medias about comics. Nowadays, things seems to have gone back under the radar with time; the second book made no issue at release and I hope this third new book will follow the same path and not get issue with the syndicate of French comic authors. If the syndicate of French comic authors wants to fight something, I invite them to go to read the conditions and terms of use of the big comic platform like Webtoons or Tapas and digg a bit about their consequences on the industry. I would prefer them to spend energy on copyright and license issue instead of shooting small independent webcomic author as me who tries new project made of patronage, ethic and the creation of a common... But I understand it is easier to show dominance over a single artist than in front of giants of the industry?

On my side, I'm still on my way to propose my alternative model and oppose to the usual industry buisness model based on copyright, proprietary fictional universes, teasing & paywall market... But my quest takes more time than I thought, Pepper&Carrot is already five years old! I certainly came with this proposal and ideas too early and the crowds were not ready and not enought concerned deeply by investing efforts into common resources, independent systems, small collaborative structures, trust and license freedom. But I'm confident, alternatives needs to exists and Pepper&Carrot exists thanks to the support of the audience! I'll continue this quest and produce more episodes and fill a book four, five or more as long as I can. 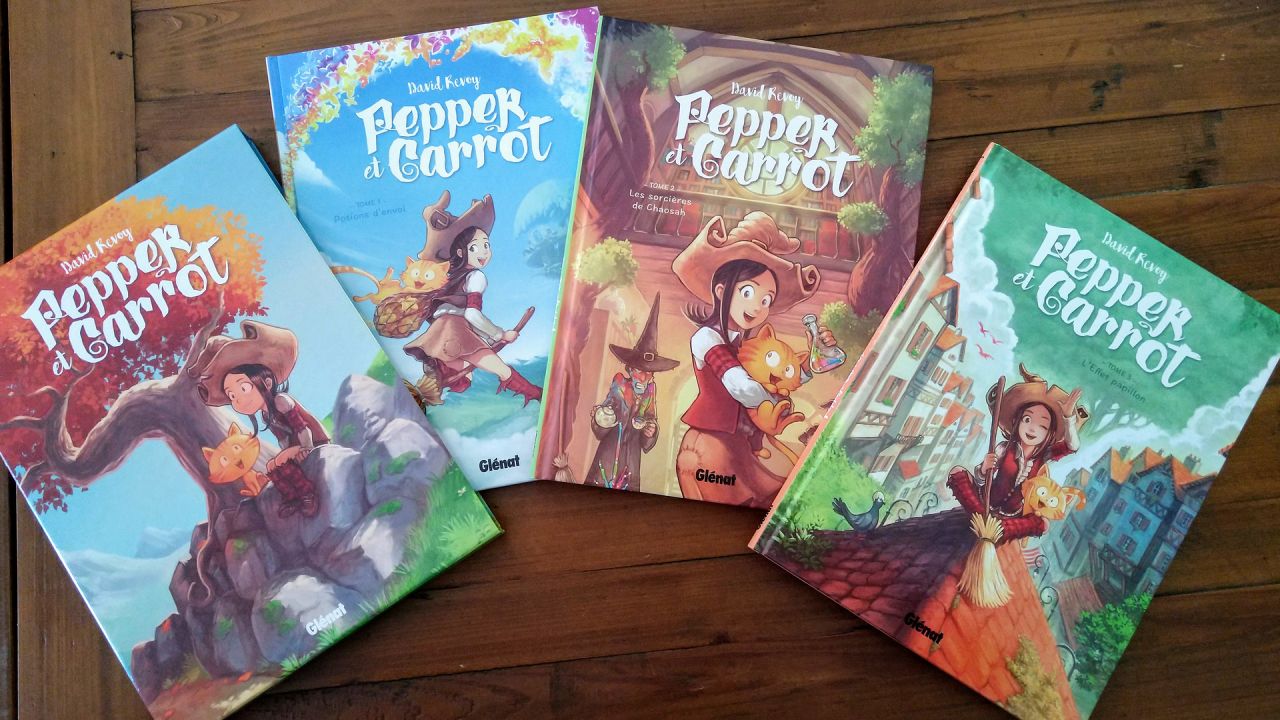 The three books and the bundle on left

As a usual, I'm writing a disclaimer here about any Pepper&Carrot external commercial derivations: I remind you I'm not earning any percentage of the sales of this book. I'm earning my money only via the patronage of Pepper&Carrot new episodes and Glénat is still the number one patron of the project since 2016. They also commission me extra illustrations as the one for the cover (illustrations released under CC-By license). So Glénat is weighting big in the ecosystem of Pepper&Carrot (they help this way at founding 1/4 of the budget of each episodes). That's why I have no issue promoting them as partner and encouraging audience to buy this derivation: I'm transparent about it. 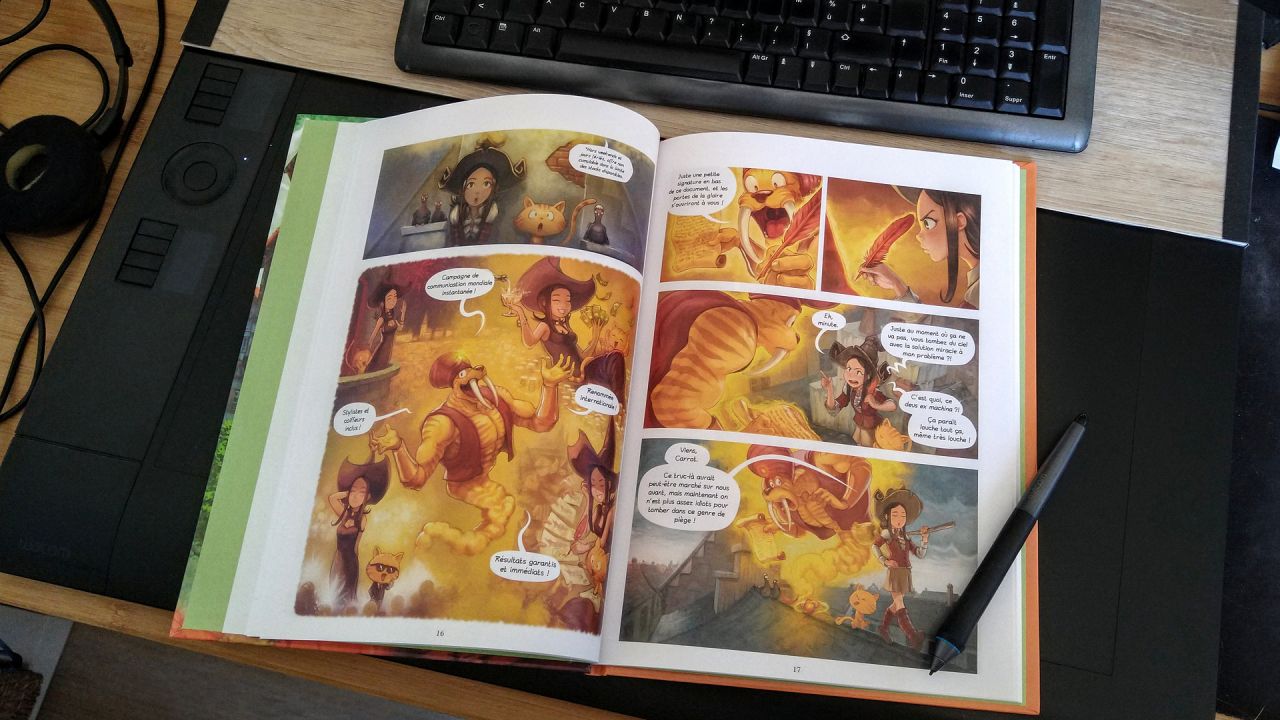 The yellow of this scene renders really well printed.

Also, a big thank you to all contributors and proofreader who helped at improving this collections of episodes. The license attribution is respected into the details and can be found on the first pages of this printed version. A special thanks to the French translators: Nicolas Artance, Calimeroteknik, Midgard, Valvin who helped me to translate the episode from English to French (because I wrote many of this episodes directly in English to ease the collaborative storyboard beta reading system process). Also, the full list of credits and patrons of Pepper&Carrot is printed at the end of the book.

All in all, I'm really happy about this third book. I saw the price was a tiny bit more than 10€. If you want to purchase the third book, please consider buying it in your local bookstore that can be still better than in a big online market place. I recommend A Livr'Ouvert on Paris, Les petits Ruisseaux on Toulouse. 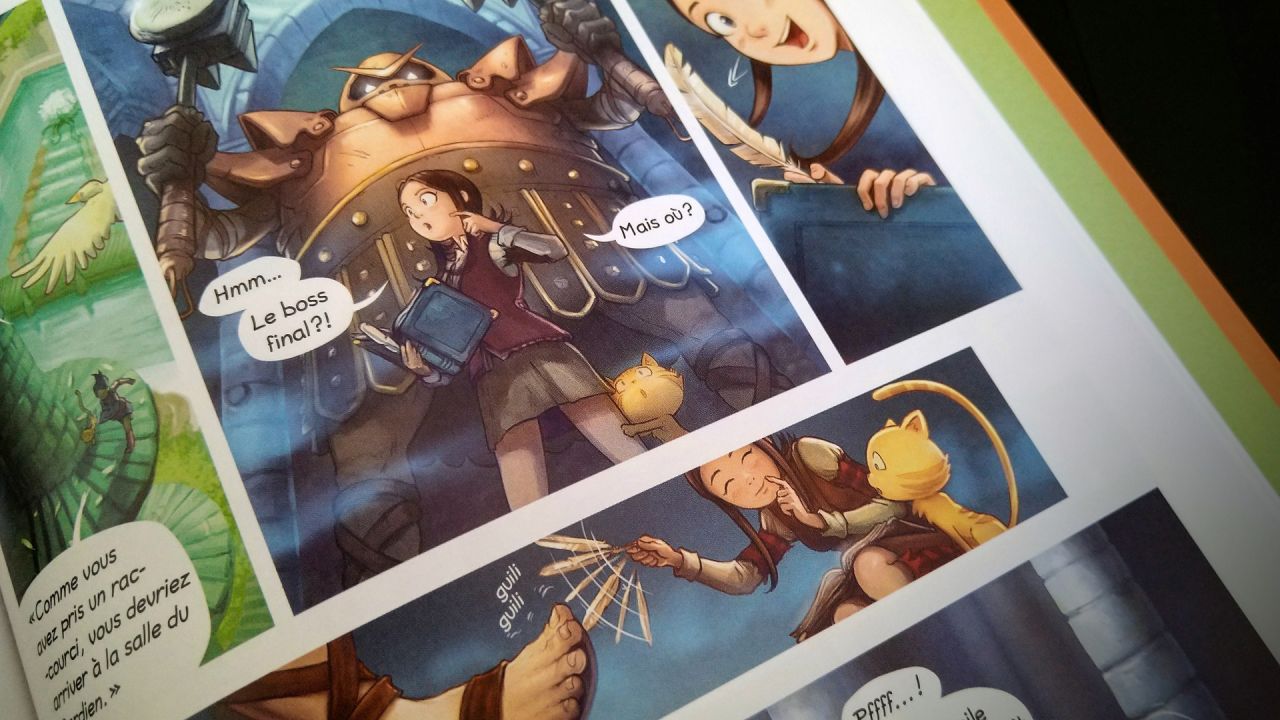 close-up: print quality is good, even on dark panels

Next post
License: ⒸCOPYRIGHTED Copyrighted by the owner(s) mentioned in this article
with a special permission to republish here, 23 august 2019.
Unless otherwise mentioned in the article.

I'm looking forward to find this one in the bookshops! Thanks a lot for your dedication!

That would be great if I found a way to share the article of my blog on a repo for that, sure. Right now the HTML embeded into XML output of PluXML is rather too garbage to be readable by human. Maybe one day I can convert all of that to something simplier like Markdown and sync it or even propose it for a translation system.

It's great that this 3rd book is being published. It's a well deserved recognition from Glenat, who is offering its chance to CC-licensed content.
I'm looking forward to have it in hands :)