Nikolai Mamashev is running an Indiegogo campaign. His goal? to find 4000$ to get producion time to transform the episode 6 of Pepper&Carrot , 'The potion contest' into an animated video, a motion comic!

First, a little disclaimer: I'm not participating in this project (exept obviously for this blog post) and I'll not benefit from the money of this indiegogo campaign: It's all for Nikolai's production and I'm totally fine with it. I love his project, and let me tell you why, as the author of Pepper&Carrot, I think his project needs to be funded:

Respect of the art style

Nikolai Mamashev is a known artist in the world of free/libre software, you probably met him already around the Morevna project or in a previous contribution to Pepper&Carrot. Nikolai is a skilled professional artist with a unique style but for this project, I'm honored he decided to give life to my own art style and put his own art style into background. That's an ultimate fan-art piece and I'm blushing only at thinking about this present. His method: cuting all the artwork from the source and redrawing the missing frames, animating, deforming the original artwork. An enormous amount of work done with Krita, MyPaint, Inkscape and Blender. Here are gif animations you can find on Nikolai Indiegogo campaign:

bones, wind, complex cut. Impressive! And this shot is a simple one of the comic...

Krita transform tool in action, checking if every part of the artwork are ready

Nikolai ask 4000$ to the community to produce this short. 4000$ for more than 40 shots. Do the math, with audio, sources, and free CC-BY-SA license, it's a very good deal (almost insane) for this type of production. We will never see a good offer around like this twice, be sure about it. Here is an overview of the episode 6 : Shichimi! Coriander! Saffron! actions a lot of magic effect! ... and monster!  Well, I'm exited to have a motion-comic animated version about it. 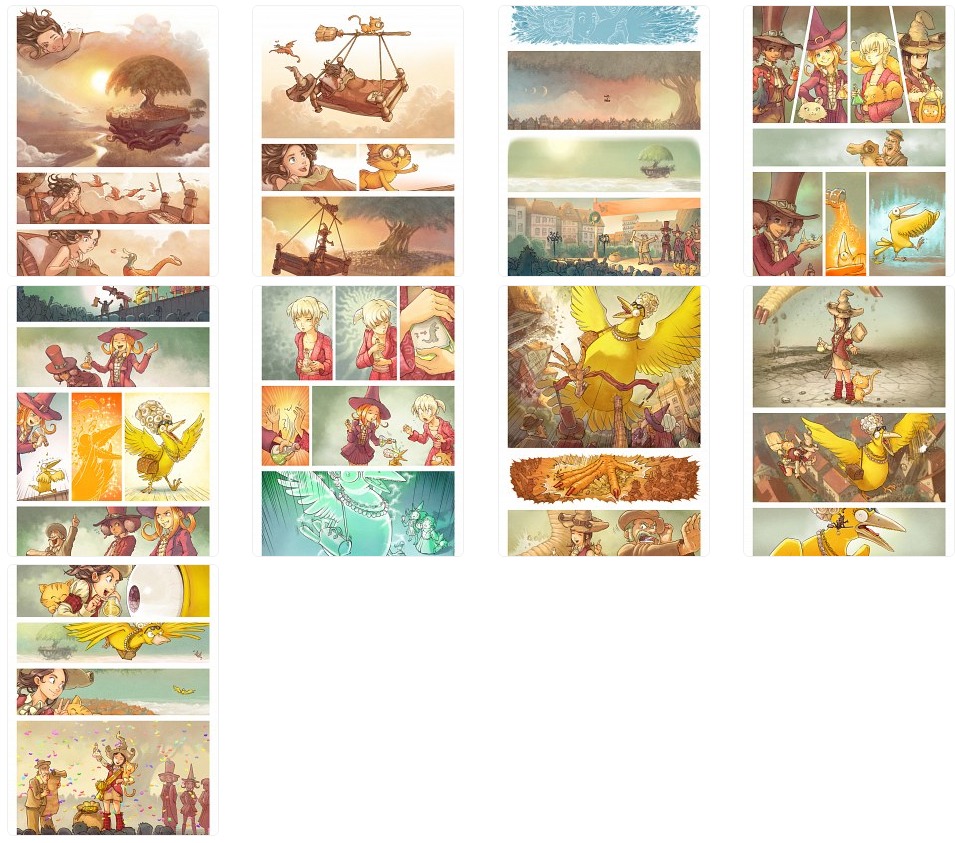 Nikolai also provides two finished quality shot as a sample to promote the campaign, watch it, it's short but magical to see Pepper taking life. Two shots gives around 20sec of video. With the 40 shots of episode 6, I'm pretty sure the final will be an animation between 3 or 4 minutes!

To finish, Nikolai propose all the sources files, and his work as CC-BY-SA.
An open-license! So, more free culture around, and yes, I'll be able to reuse sample of his work for, exemple, a Pepper&Carrot trailer or when I'll need to pitch the project in a video.

So ready to fund an awesome project? Thank you if you can help Nikolai!
https://www.indiegogo.com/projects/pepper-and-carrot-motion-comic#/
We need noise about it :-)

A comment? Something you would prefer and stops you? Encouragement?
Leave a message on the comment bellow, and I'm sure Nikolai will be around to interact with you.

@Nikolai can you produce that kind of result on "any" type of images or only the ones generated with krita ?

@David what are you waiting to ask him extra animations for P&C ? :p
I know your animations are using the GIF format but I'm sure you can use MP4 as well. Foil panels... *.*

Hey Alex, yes renderfarm right now needs a 910px large *.gif and a 910px large *.png of single frame in case of static and fallback.
MP4 sounds good and the support is much better than 2 years ago when I designed the spec ( and decided to use *.gif because compatible ).
More animated panels is a project I would like to bring, for sure. ( and also because since May, Krita has animation abilities ).

Wow, I am so much amazed by krita and by people using it. I was just looking for an alternative to paint tool sai for a friend of a friend, but krita is mo much more! (Oh, and your webcomic is awesome too)

Thanks for passing by and let me know :-)
Have fun with Krita!

Hello, Alex! Of course it can be done with any image formats.

I hope Nikolai wouldn't mind if I clarify: it is much easier to animate image if it is broken into layers (like it's done in David's source files). For example, if you have contour and fill on separate layers. It is even easier if some objects are also separated - i.e. two layers (contour and fill) for main character + two more layers (contour and fill) for background. In animation world we also use more than two layers for an objects - contour, highlights, shades and fills. But I guess I'm diving too much into details here. ^__^

Now in the campaign I have added a new reward - I can get any your image aninated.

I am absolutly into this animation! please! i`d love to donate if he teaches us how to do that. Is he making a tutorial or something? :D Tell me how to send my money.

What is the program he's using to animate your comic? And is it free?

Hi, when it will finnished?

Hey, I think you can follow the progress of the Konstantin and Morevna team here about this project: https://morevnaproject.org/pepper-and-carrot/
Right now, they still are in production as far as I know and the public news were centred about the voice contest and audio actors for Pepper&Carrot.