Cover of Pepper&Carrot: © Glénat, reusing my CC-By artwork here A lot of you noticed the Glénat logo at the end of the last episode and I received many comments about it. So as promised, here is more information:

Glénat is a leader publishing company for comic album and manga. They Publish mainly in French for the French market but also for Belgium, Luxembourg and Netherlands. They started publishing comics since the 80's and count nowadays more than 100 employees, thousands of famous authors an enormous catalog of translated US-Comics and Mangas. As a young kid, Glénat was the publisher of all my mangas. 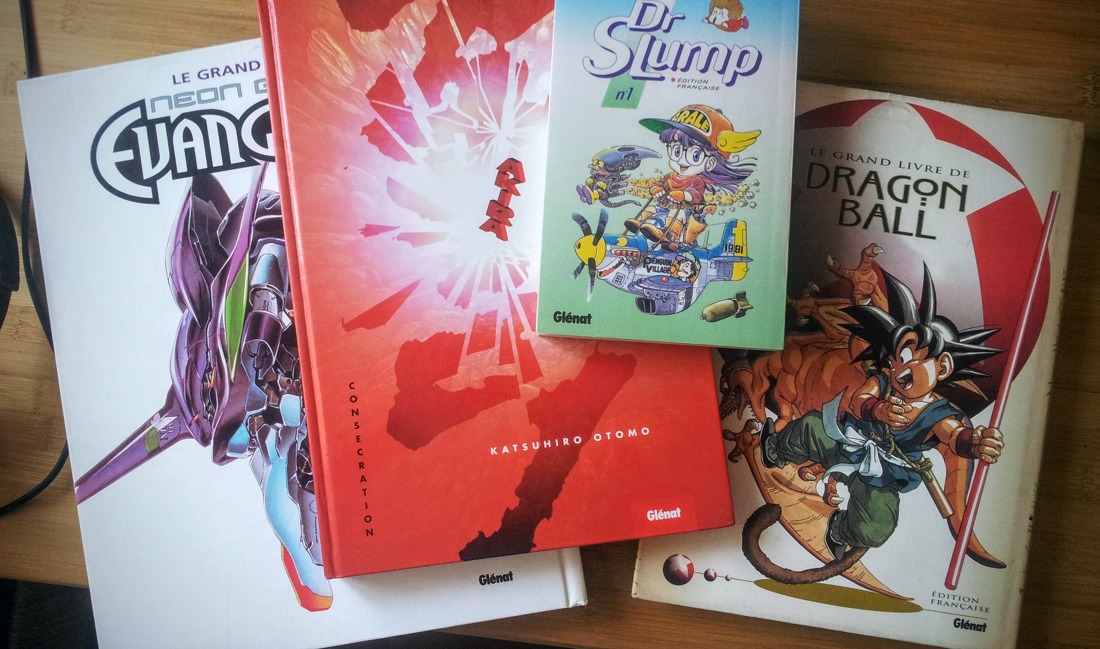 Guess what Pepper&Carrot has now in common with this books from my bookshelf? :-)(I know, nothing else than a logo, but let me dream, ok?)

Nicolas Forsans, project manager at Glénat, met the Pepper&Carrot website 8 month ago. He was seduced with the concept and decided to build an internal dossier about it. After months of work, meeting and review, Glénat decided to add Pepper&Carrot to their official catalog to print and distribute the comic in France. It will happen on start September 2016, a classic date for release of books here in France, syncing with the end of holidays. This first book will propose episode 1 to episode 11. Glénat invested for a large release: 10 000 books printed, 80 pages, 215 x 293 mm (8.2x11.4 inch) hardcover with high quality paper for the mini public price of 9.99€. (usual price here for this type of book is around 14,50€ and more) 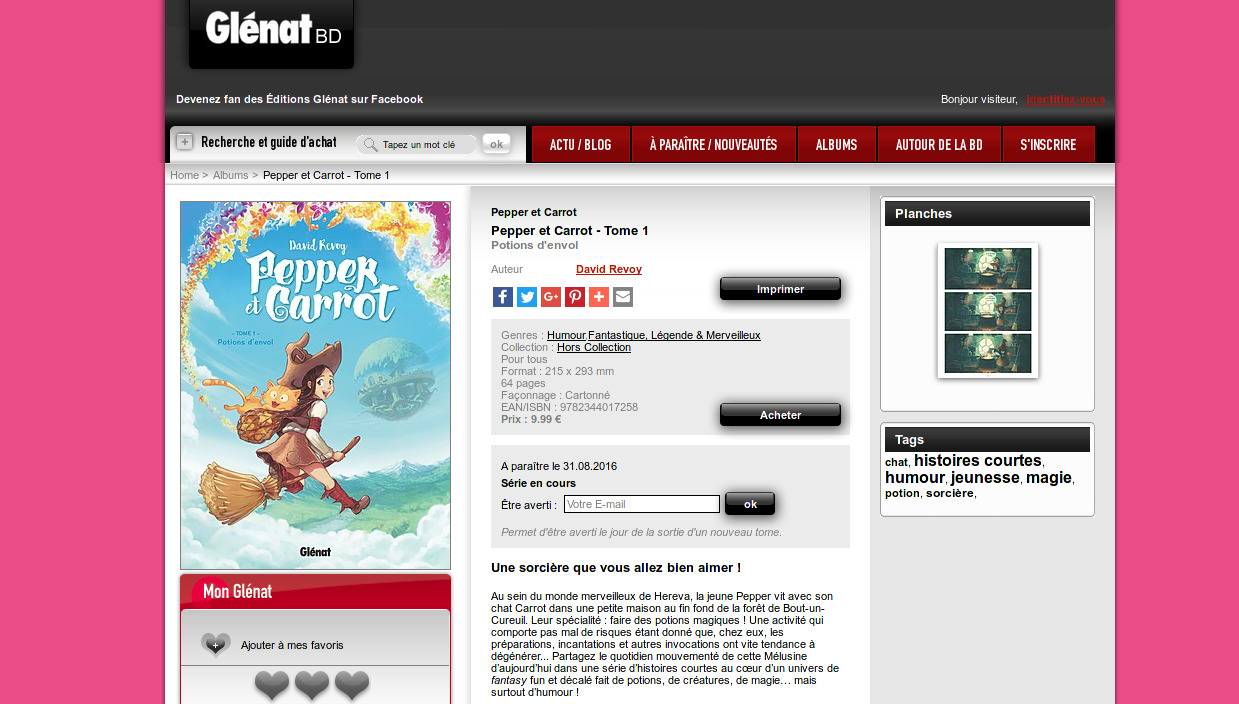 Where does the money go ?

Let's be clear: I'm not earning any money on the sales of the Glénat comic book. My main source of income is still the patronage of the audience via Patreon (plus a bit of Paypal and Tipeee). The low-cost and highly competitive price of the final book happens because of the removal of the usual part going to the author(s) and other smaller investment to prepay the production of all the pages. But! Last month, Glénat joined the patronage of Pepper&Carrot via Patreon as a 'Company' sponsor. That's why you can see the logo at the end of my last webcomic ( the logo on the credit is a reward I offer to the companies sponsoring Pepper&Carrot episode). They are free to leave this sponsoring at any moment: our only contract is the Creative Commons Attribution 4.0 International license.

Nothing changed: Pepper&Carrot is still open, free, for everyone of us under the Creative Commons Attribution 4.0 International license (If you know CC licenses, you know I cannot revoke it).

Glénat are used to work with their own contract since decades and the legal department had to adapt their structure to work with the Creative Commons Attribution 4.0 license. We ended by just adding a single page to the CC-By : a minimal set of paragraph just to ensure I'm the author and certify to publish the comic under the CC-By and Glénat to respect the rules of it.

So, no additional special rules exists between Pepper&Carrot and Glénat : they use the same rules as any other derivatives projects and there is no exception about it. This was a great test to see how the CC-By was complex enough to fit the legal needs of a large industrial and commercial department. A success!

Using CC-By into a proprietary result

The strategy of Glénat was to produce a heavy graphic layer on the top of the CC-By artworks (new title art, new font, stylized desktop publishing). This way Glénat produce a derivative work with the source of Pepper&Carrot and so they can use it as a proprietary work. This is allowed as long as the authors and contributors are credited correctly by the Creative Commons Attribution 4.0 international license.

You can imagine that in this context a special effort was involved to add proper attribution everywhere inside the book and I was involved into reviewing the correct attributions. No one was forgot! They also went a step further adding a special page to thanks all the patrons from episode 1 to episode 11.

This practice will help them to protect a specific Glénat 'visual identity' against potential competitor publishers, the low cost too. Other publishers or companies can still publish Pepper&Carrot, but they'll have to do their own cover desktop publishing by reusing the source artwork and not by duplicating the cover made by Glénat.

Will Glénat contribute back ?

Yes, Glénat will add value to the project on two aspect: First, Glénat paid a corrector for ironing the French version text and speech-bubbles and they will release the correction under CC-By license. This way, the community will be allowed to merge back the 'fr' corrections in the Git source code repositories.

This publishing will also add another great value to the project: Glénat has a powerful force of distribution, marketing and a complex network with the comic press. It will bring more eyes on Pepper&Carrot for sure. I already received invitation to do autograph in bookstores. All Pepper&Carrot community projects will benefit of this boost of notoriety.

Nicolas Barberon, the dedicated in-house graphist at Glénat for working on the Pepper&Carrot project, made all the desktop Publishing on a Mac with the Adobe tools. He had to adapt his workflow to work with the Pepper&Carrot sources; Krita files, Inkscape SVGs and hi-quality Jpeg. Something unusual, without any classic Photoshop PSD 'industry-standards' files. I probably could produce PSDs and bend myself to use their standards, but I decided my standards were more fair and legit than the Adobe ones. At the end and with a little effort, everything worked. 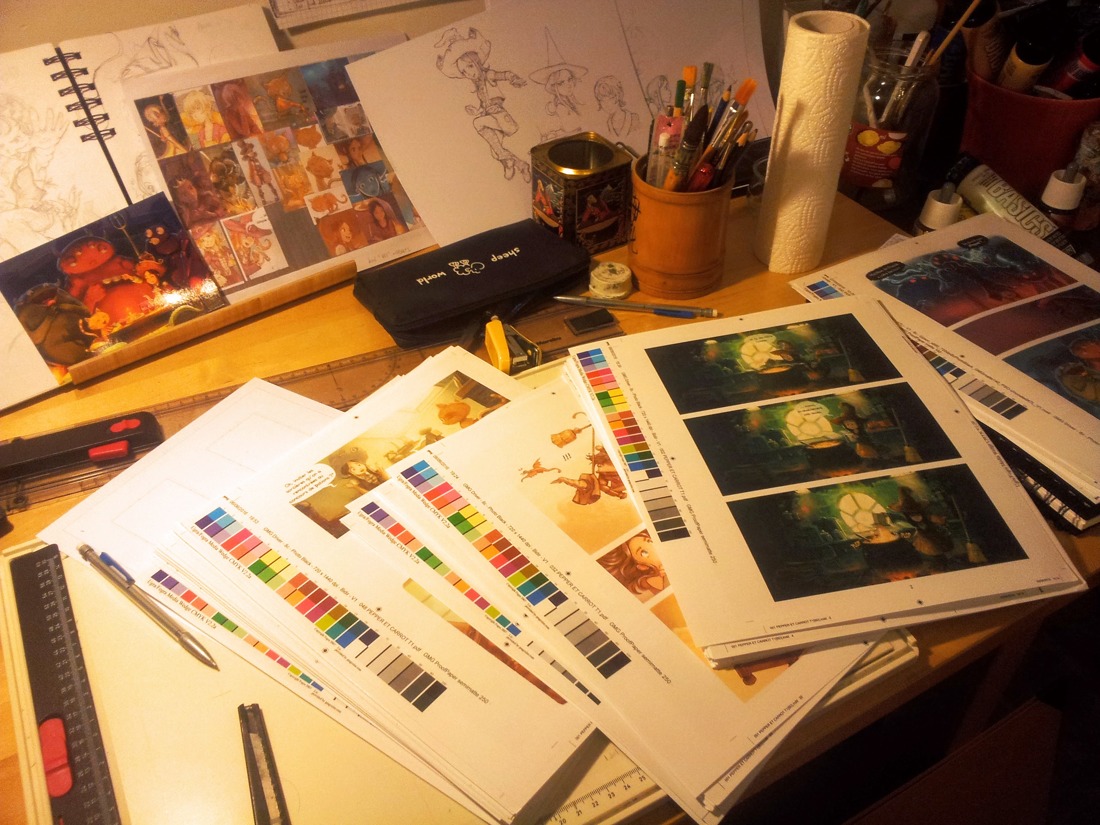 I appreciated Glénat asked my feedback at many steps during the process and took it into account. For example, I could review the quality of prepress proofing , enhance the cover artworks, giving opinion about colors and fonts used... I rejected the first set of 'proofing' because of ink and paper. They sent me another proposal, a lot better : the one (on photo) that will be used in final product now. Colors are how I designed them, and this is a good proof my color setup under Linux with Krita and ArgyllCMS is accurate.

Conclusion? a first step to change the comic book industry!

Ok, ok, it's only happening in France and not world wide... I know :) But I hope this first step is the right step. My alternative way to handle Free/Libre license for comics produces effects, and I keep in mind all of this couldn't happen without the support of the audience. They litteraly fuel Pepper&Carrot and this type of new experience happens only thanks to their support!

I hope the model can be extended and will shake other publishers around the world and more; other artists. I persist to think artists can change the 'industry standards' by adopting new behavior at their own level, at the root of production, and not wait something more fair coming from the top of the pyramid. It's our responsibility to choose the tools we likes, the standards we trust and the rules we want. So, who's next now? Marvel? DC? Disney? Shueisha?...

Next post
License: ⒸCOPYRIGHTED Copyrighted by the owner(s) mentioned in this article
with a special permission to republish here, 6 july 2016.
Unless otherwise mentioned in the article.

That's great news ! Will consider buying it for sure.

Well done! Good news that even you are approached by a book company, you stay straight in your shoes to not use proprietary standard instead of FLOSS standard!
Many thanks for that!

Congratulations!
It's very interesting to see the industry working with open and free licenses.
I hope all this helps you earning money from other works (or more patrons).

Thank you! Yes, I hope too it will bring more patrons to support my artworks :)

Congratulations to get Pepper and Carrot on paper!

Is there any change for a english or german comic version?
If life where a computergame my language skill for french would be ... like ... 0. :|

And yes i want to buy it, with hardcover and all the other things a book has.
I've allways collected books and i just love the way books feel and smell. I allready printed this PDF of yours in a copyshop but ... that wasn't the same, it didn't feel right.
It felt more like *meh*. :|

An english project is planned with the Krita Foundation ( before Xmas 2016? ) . For German; I don't have any contact, but publishers of Europe will probably have their eyes on the sales of Pepper&Carrot by Glénat. If it's good and the product benefit a lot to the publisher, I expect a snowball move accross publisher :)

Thanks a lot for printing the *.pdf ( http://www.peppercarrot.com/extras/print/2016-01-20_first-official-ebook_beta0-1_300ppi.pdf ).
I hope we will make a good publishing with Krita Foundation. Scott Petrovic at Krita told me he was interested to redo all the book with Scribus ; it was last week.
It's still very fresh! Thanks for your support :)

Can't wait for having a Spanish version

Oh yes, I hope a Spanish publisher will build a project with it. TheFaico made a big work around the translation :)
Feel free to give him feedback about it.

Congratulations! And Bravo for keeping your "free and open" integrity safe.

Well done David.
Is there any chance you will come in Toulouse next november for Capitole du Libre ?
The Call for Participation is opened until the 30th of September :)

Hey, thanks!
YES, I already locked the week-end on my agenda, I'll propose a talk about Pepper&Carrot and a Krita workshop, a bit longer :)

Are there any plans for an international edition? I would like to buy a nice hardcover edition of Pepper & Carrot comic book but unfortunately I don't speak french :).

There is a plan about it, but no official public release at the moment.
Next publisher to adopt Pepper&Carrot is german.
Maybe you can help and ping a publisher of your country about it ? Thanks!