Sintel is an open short movie produced by the Blender Foundation. I worked on it as an Art Director from February 2009 to September 2010. Official website www.sintel.org. Description from the official website :

"Sintel" is an independently produced short film, initiated by the Blender Foundation as a means to further improve and validate the free/open source 3D creation suite Blender. With initial funding provided by 1000s of donations via the internet community, it has again proven to be a viable development model for both open 3D technology as for independent animation film. This 15 minute film has been realized in the studio of the Amsterdam Blender Institute, by an international team of artists and developers. In addition to that, several crucial technical and creative targets have been realized online, by developers and artists and teams all over the world.."

Many concept-art and artworks were necessary to capture the epic and fantasy feeling I wanted for Sintel. Here is a sample of the one remaining in the movie.
My tools were Gimp-painter 2.6 and Mypaint 0.6 on Linux Mint 7 Gnome 2.0. 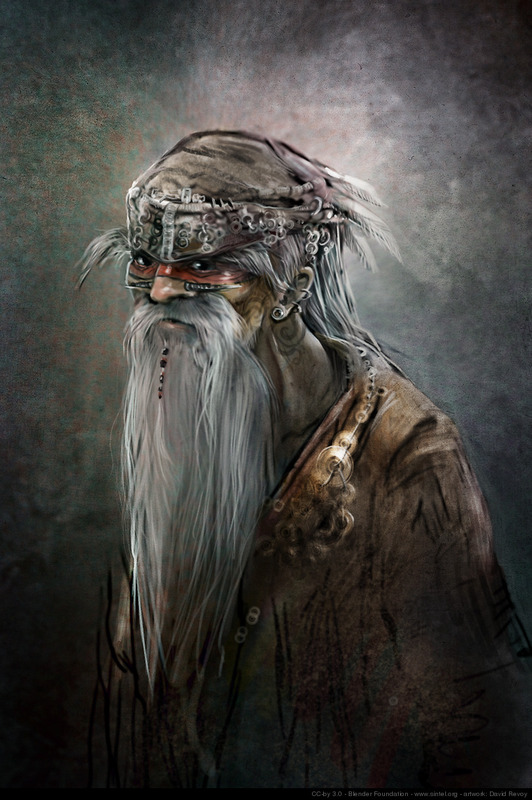 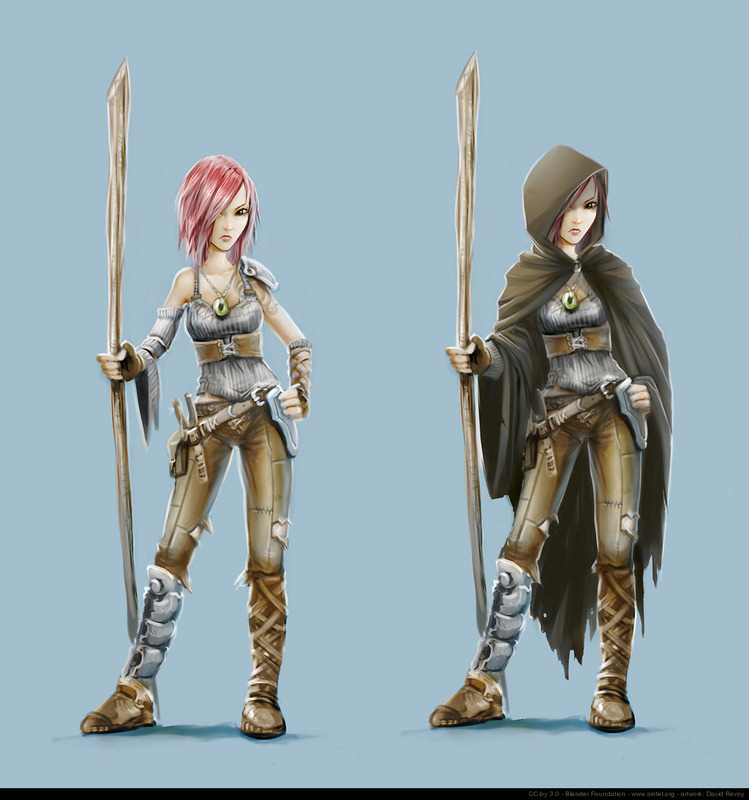 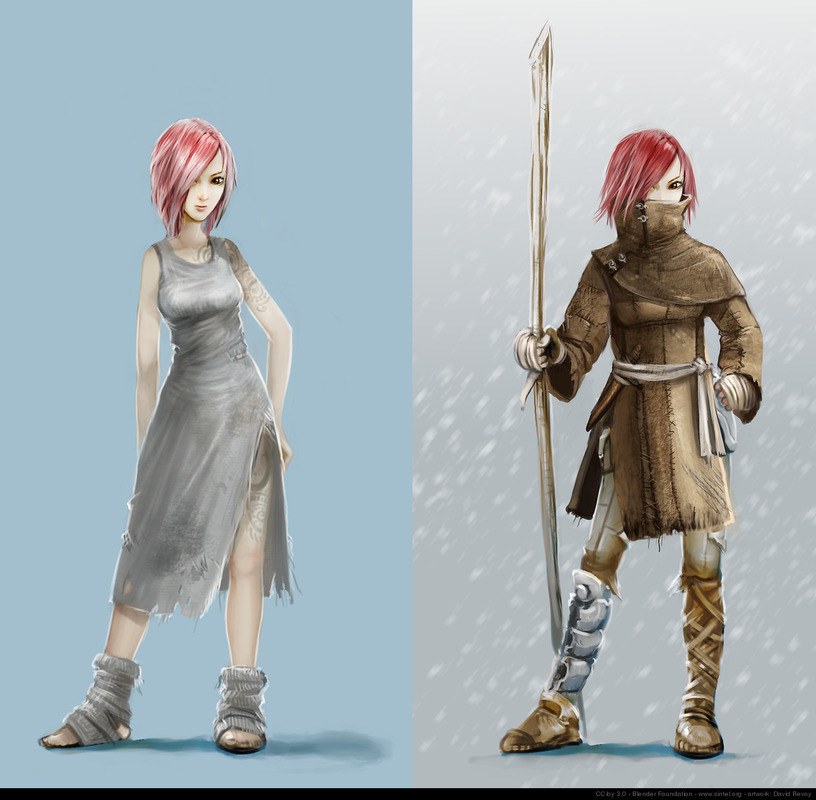 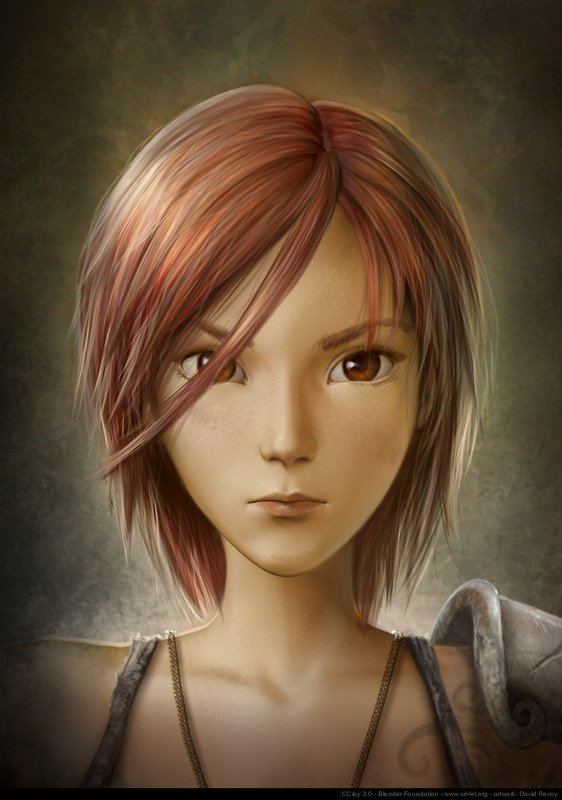 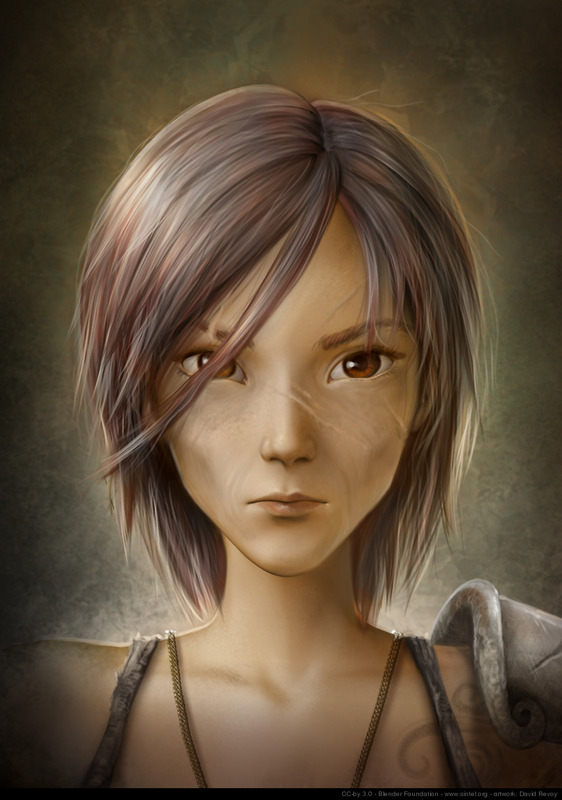 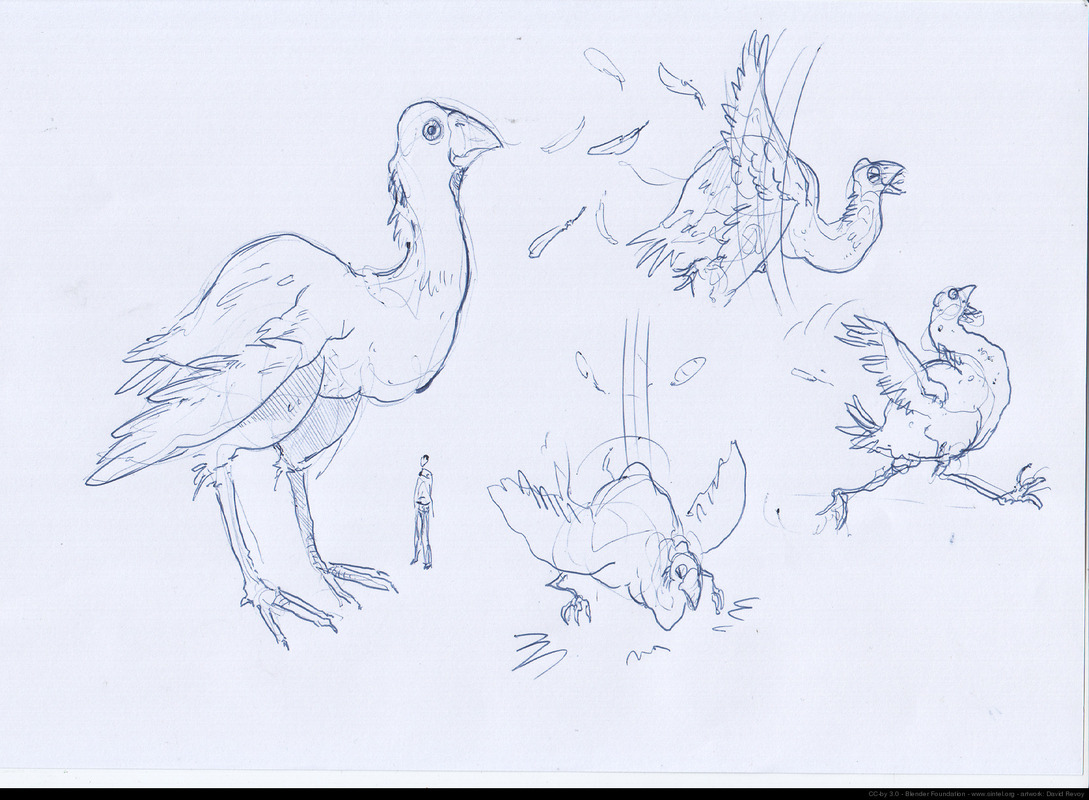 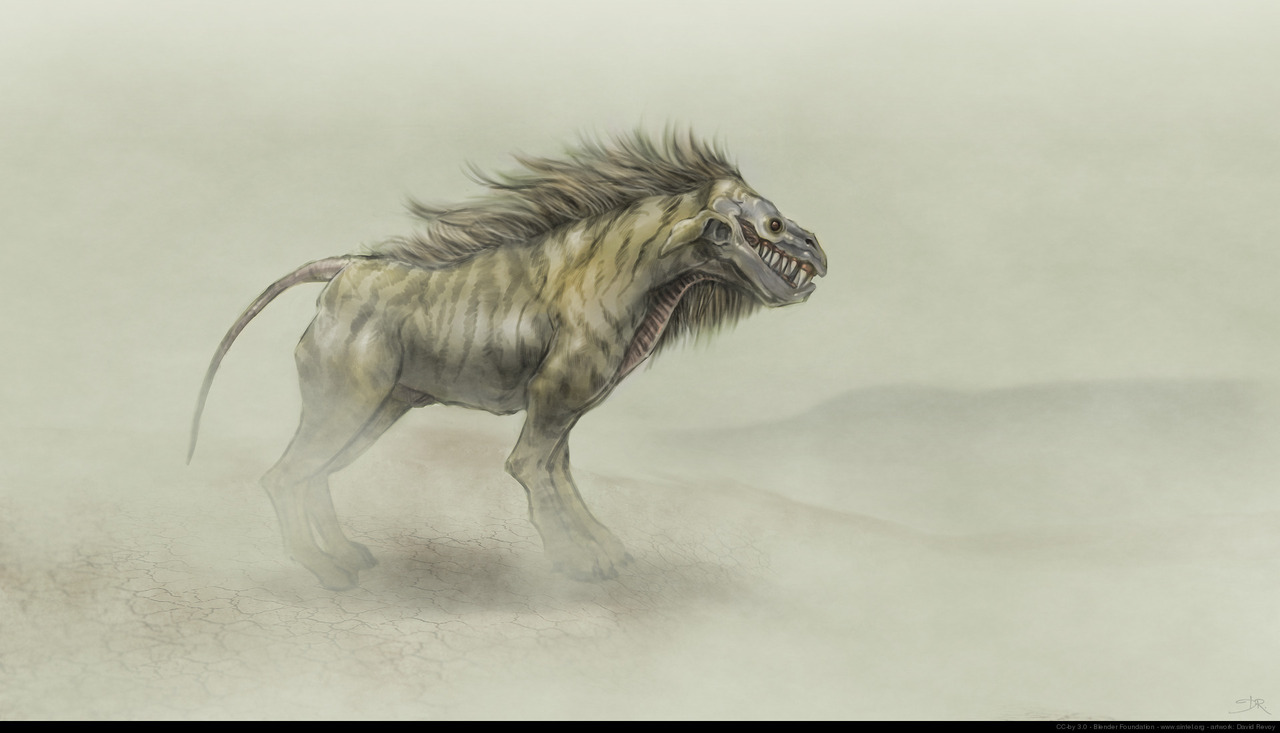 Hienna, creature on her journey 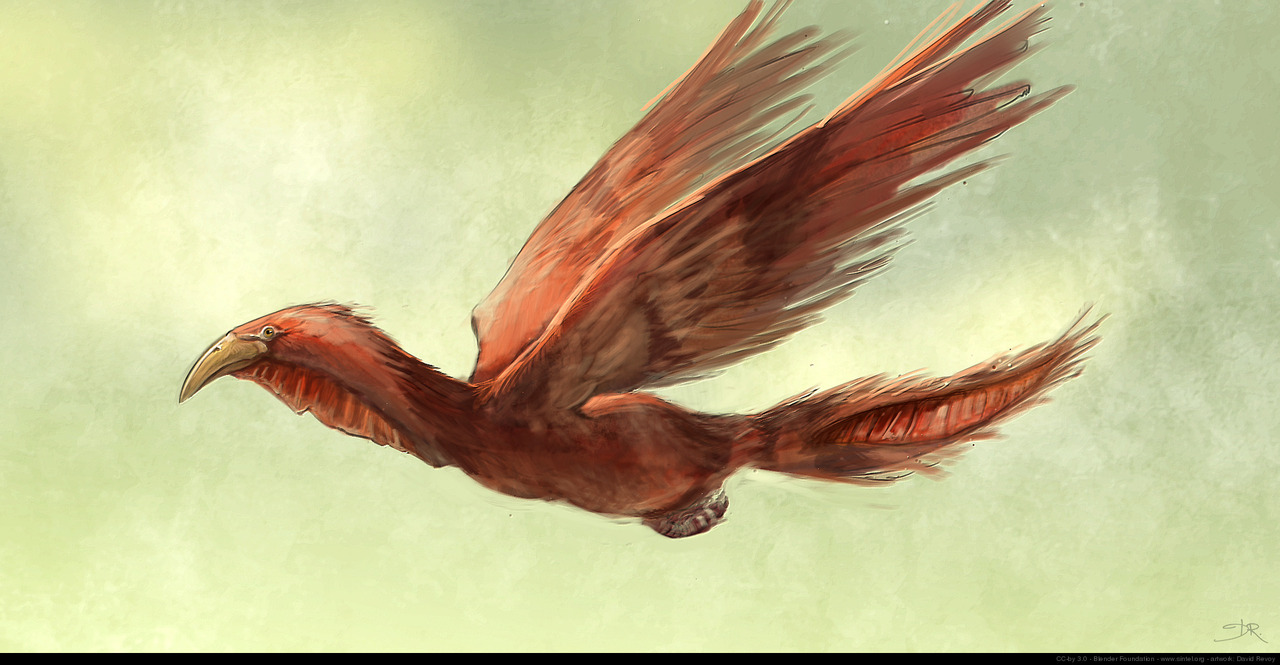 Snow fighting previsualisation. On the original script ; four guardians were waiting for her 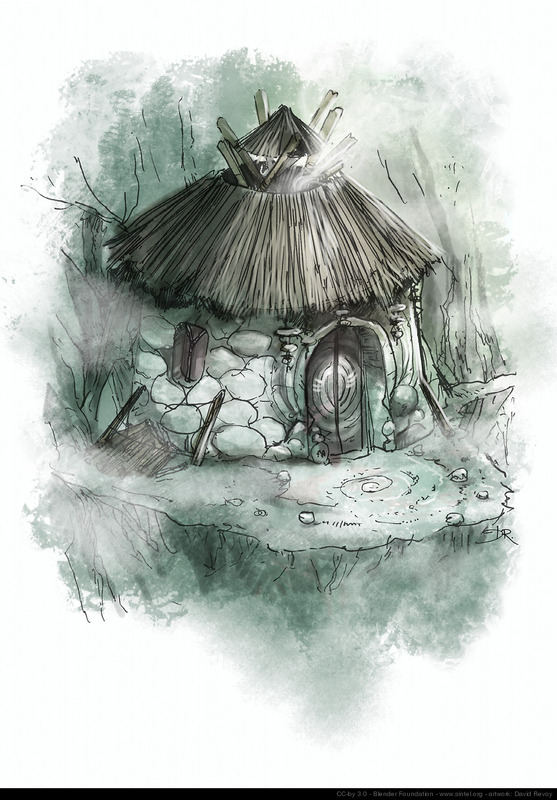 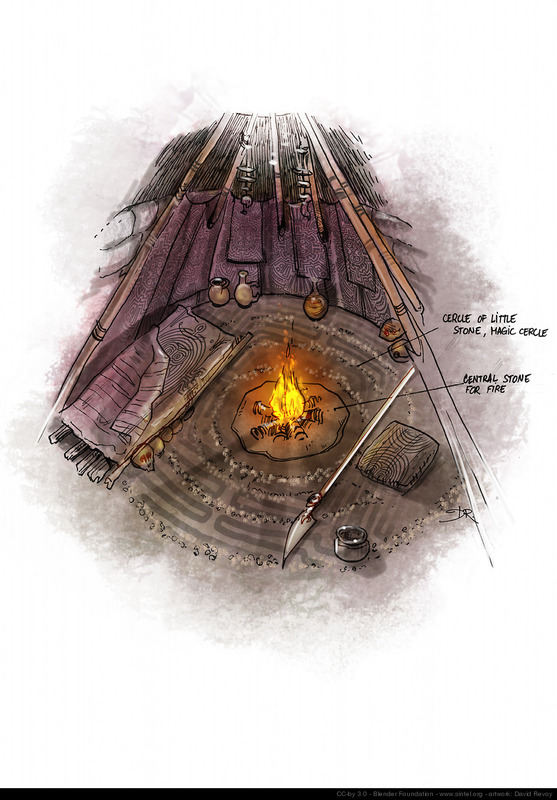 Shaman hut, previsualisation for the ambiance 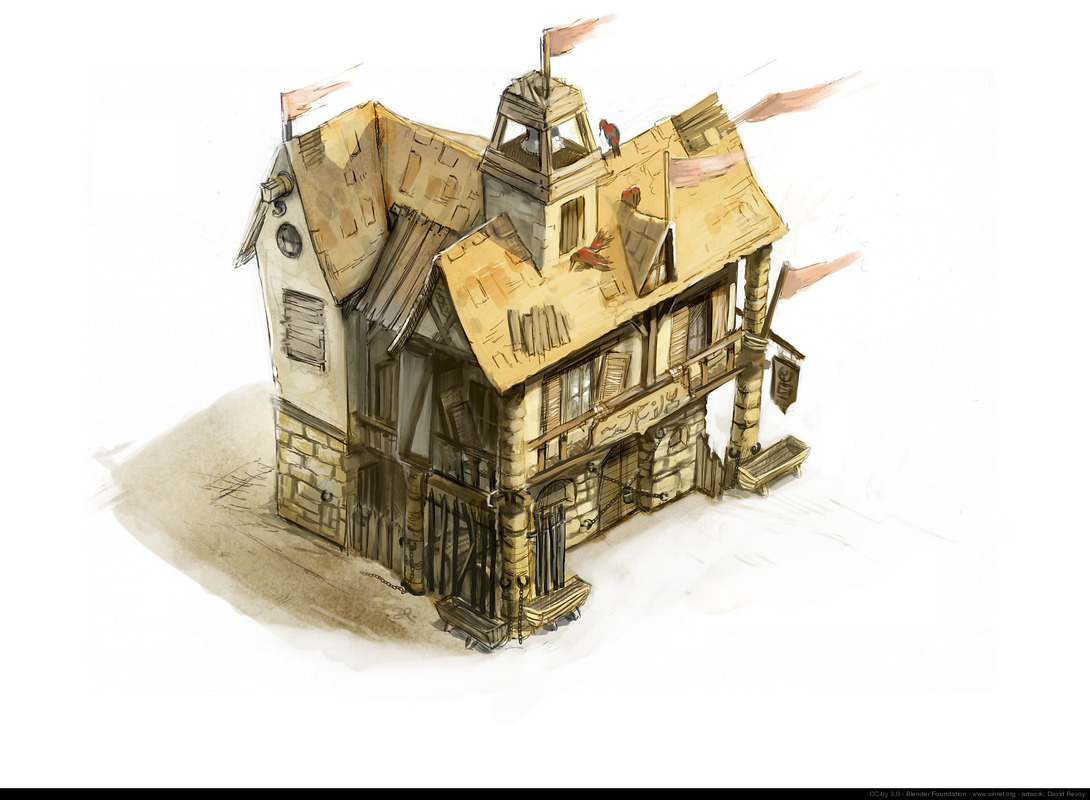 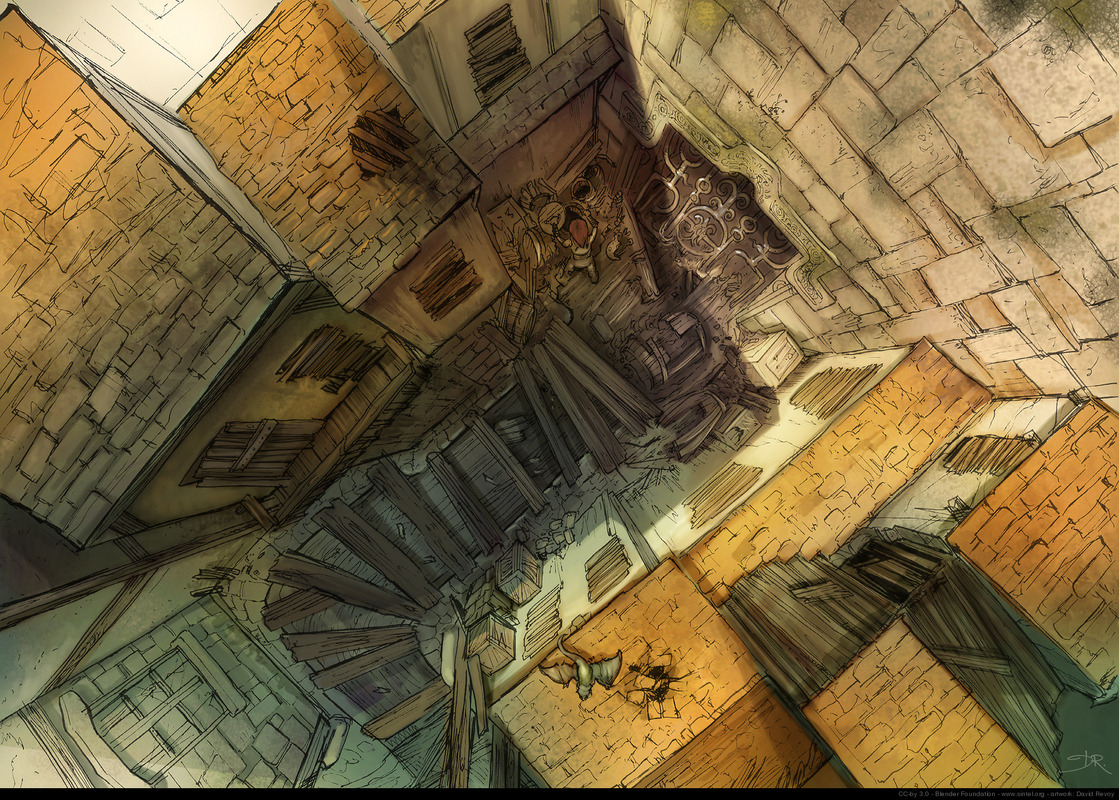 Ishtar alley , design for the first scene. Top view was choosen to show the spacial distance of elements. Grid and dirty waters of Ishtar were removed for technical reason. 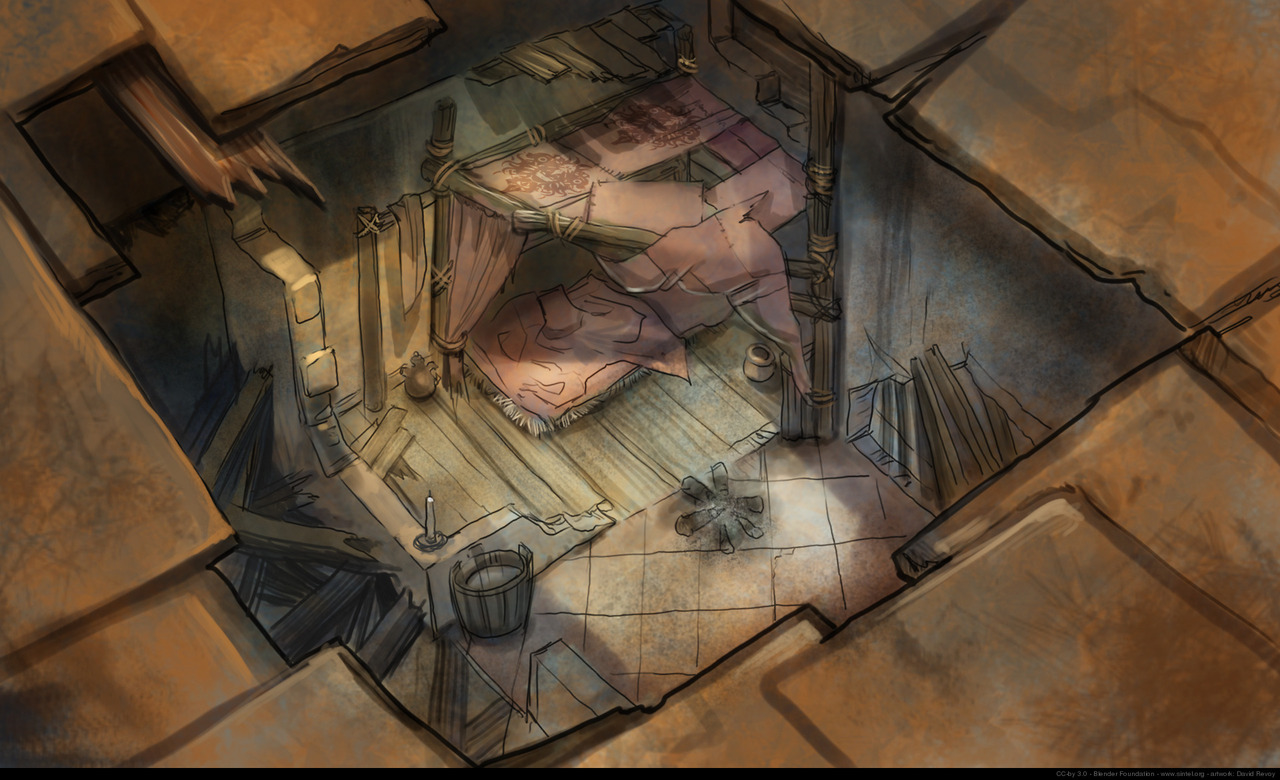 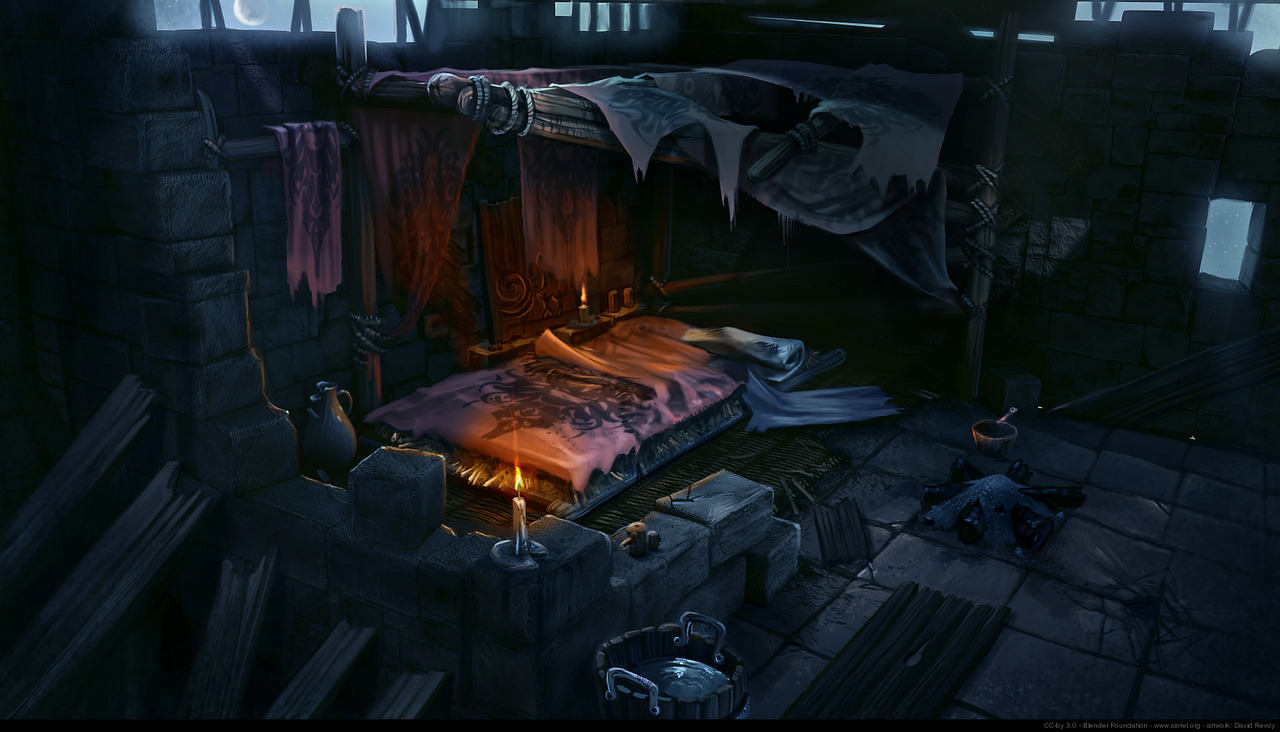 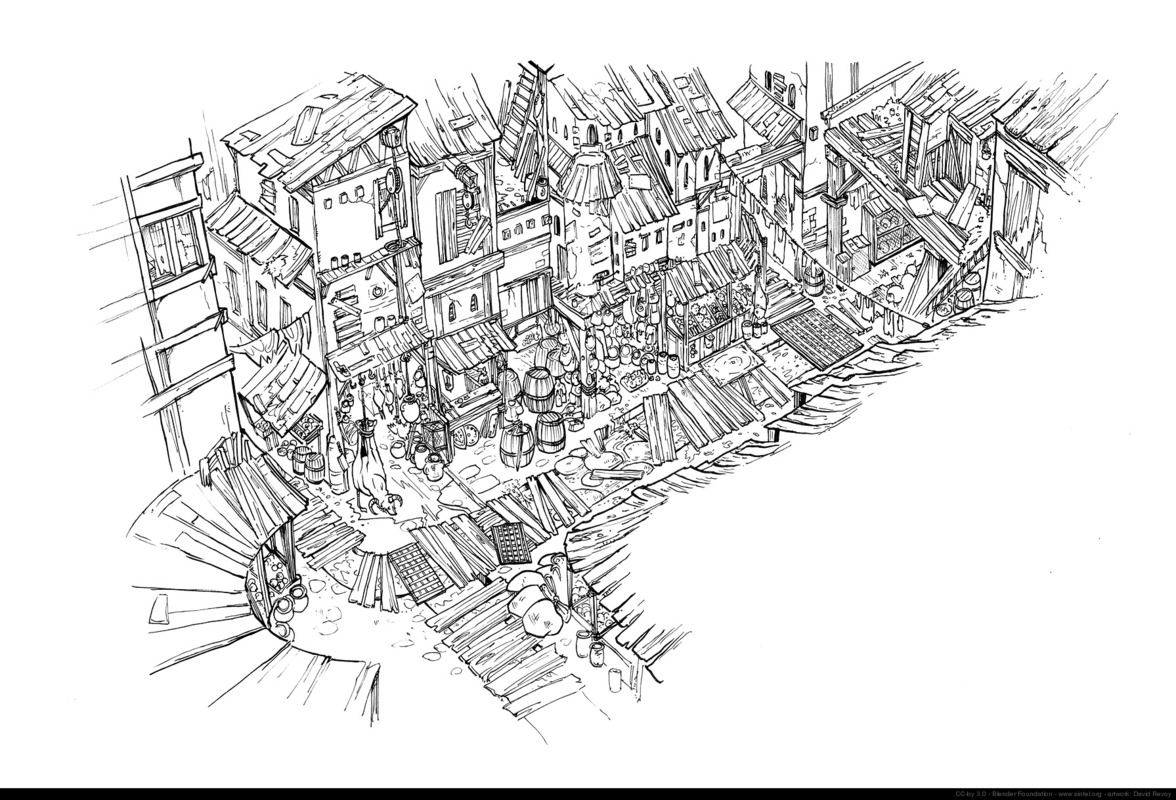 Concept for an Ishtar street with markets 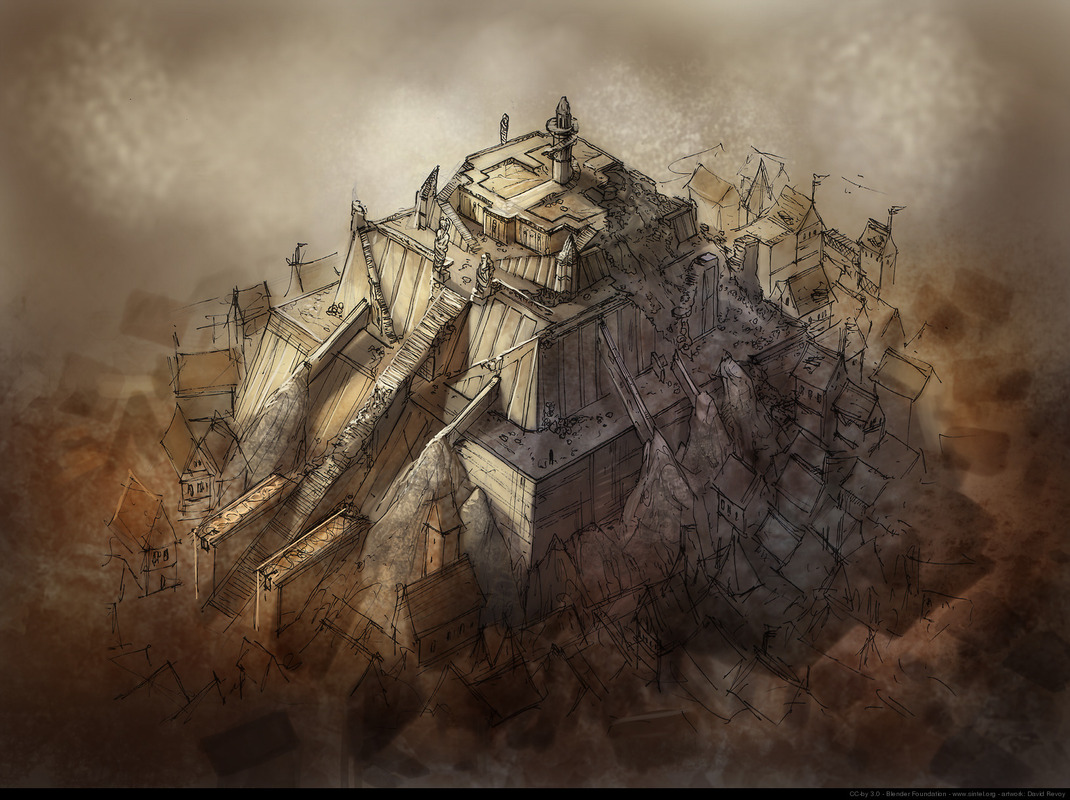 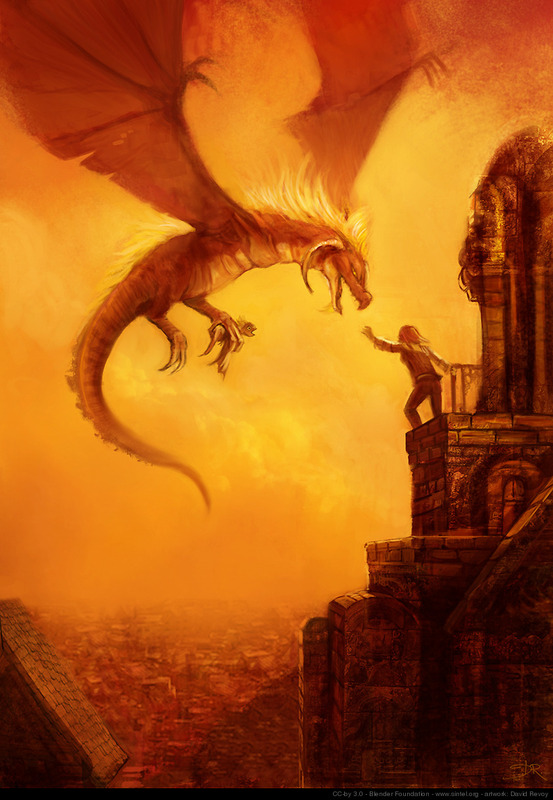 One of the first early illustration artwork of Sintel ; showing the key story elements 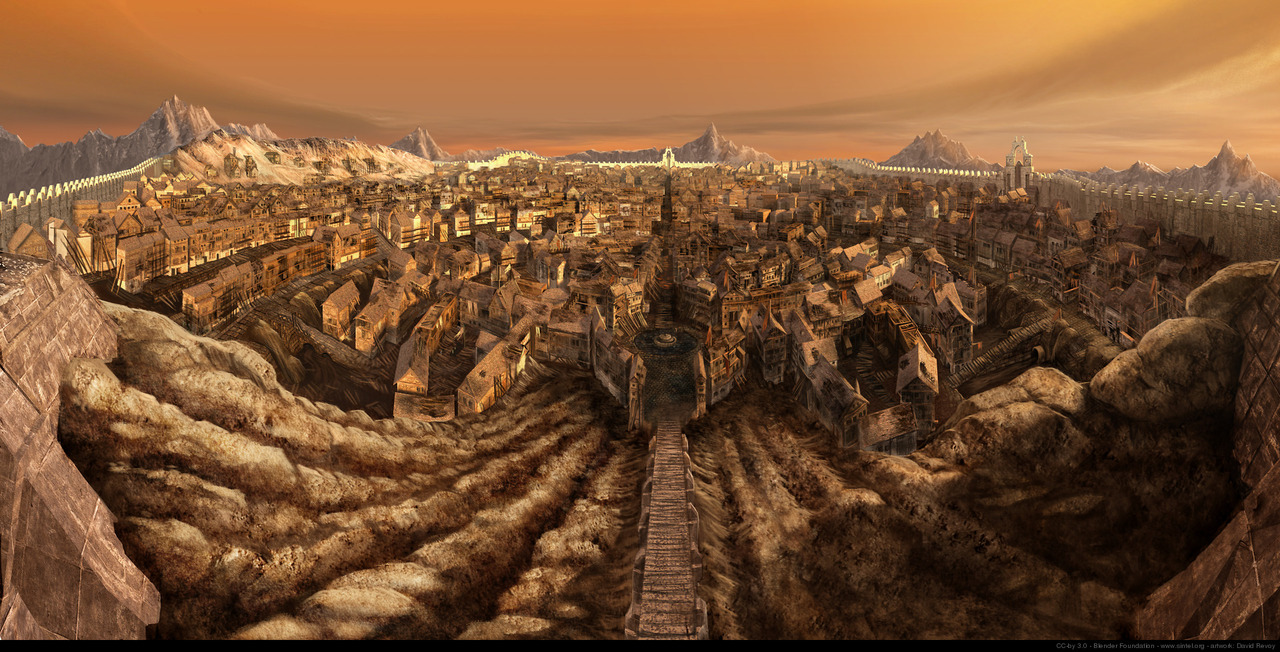 large mate painting ( in the movie , used on background when Sintel is on the top of Ziggurat ) 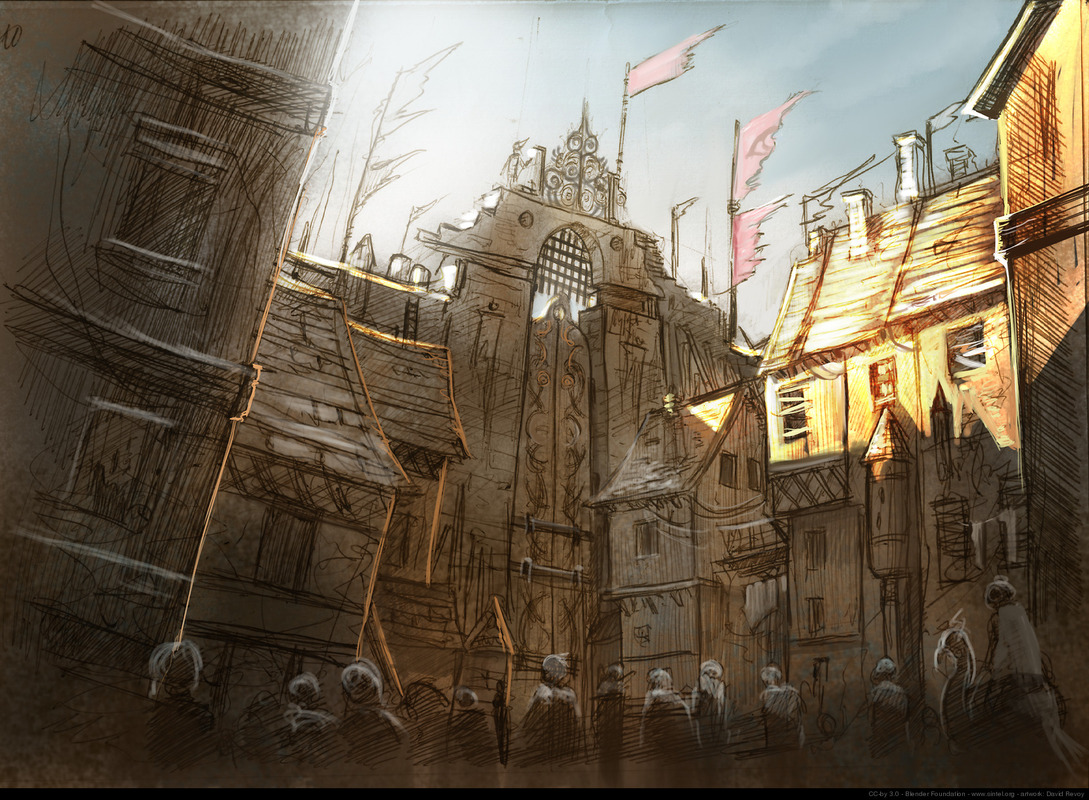 Previsualisation of the bamboo forest , a step of her journey 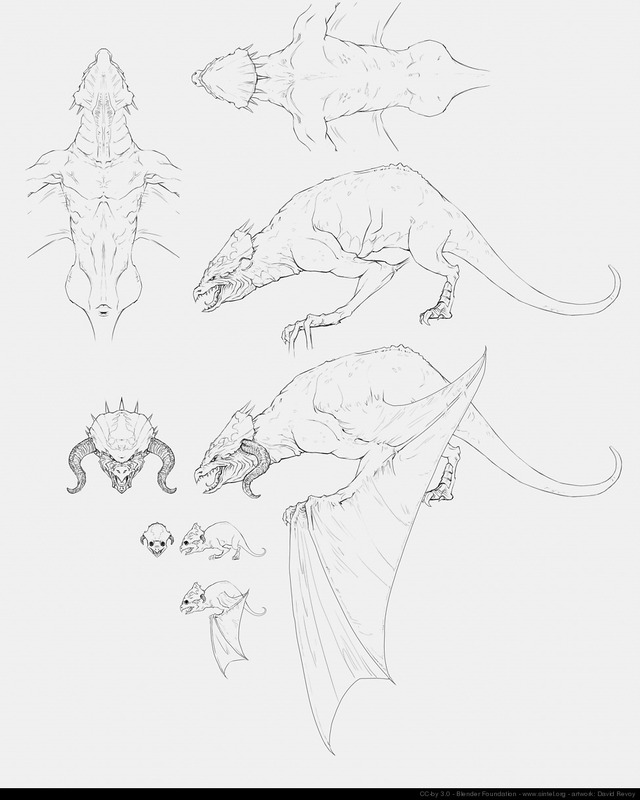 model sheet of the dragon 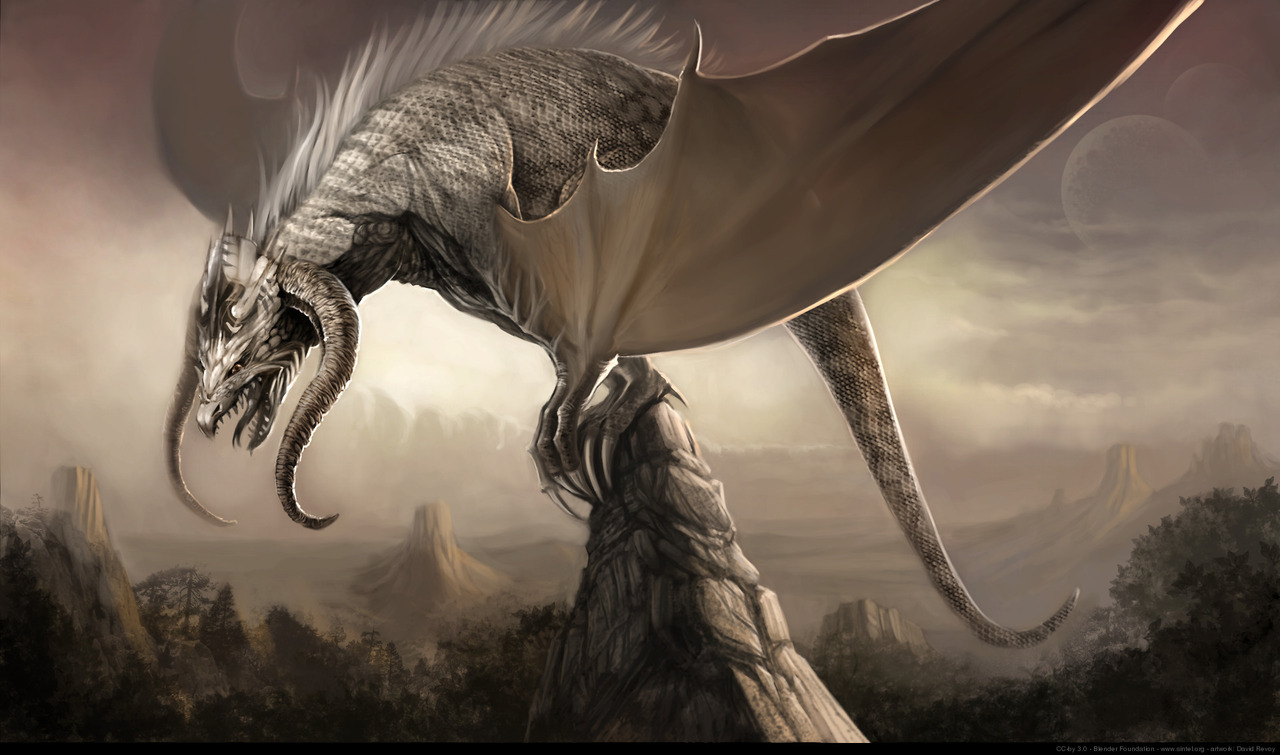 Concept for the dragon 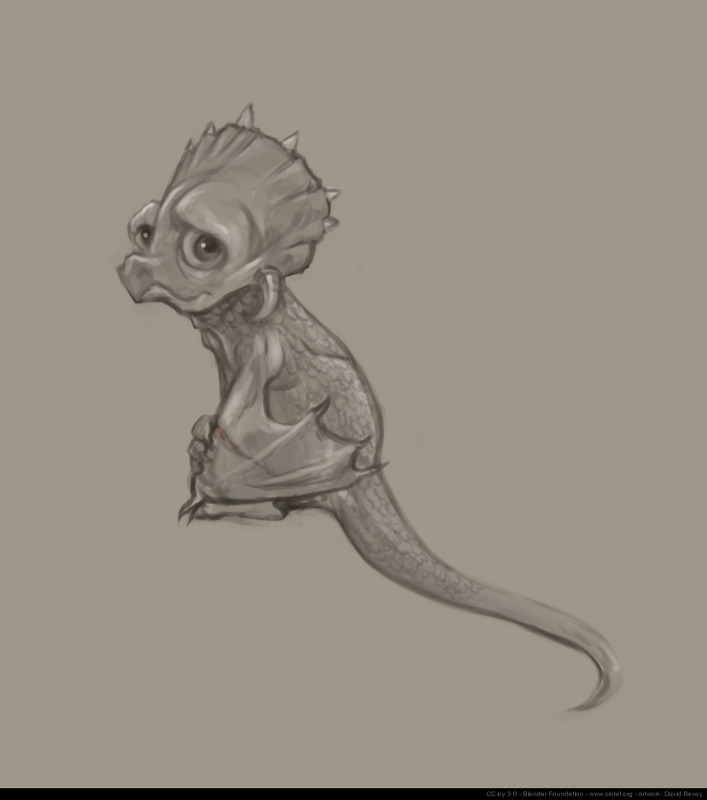 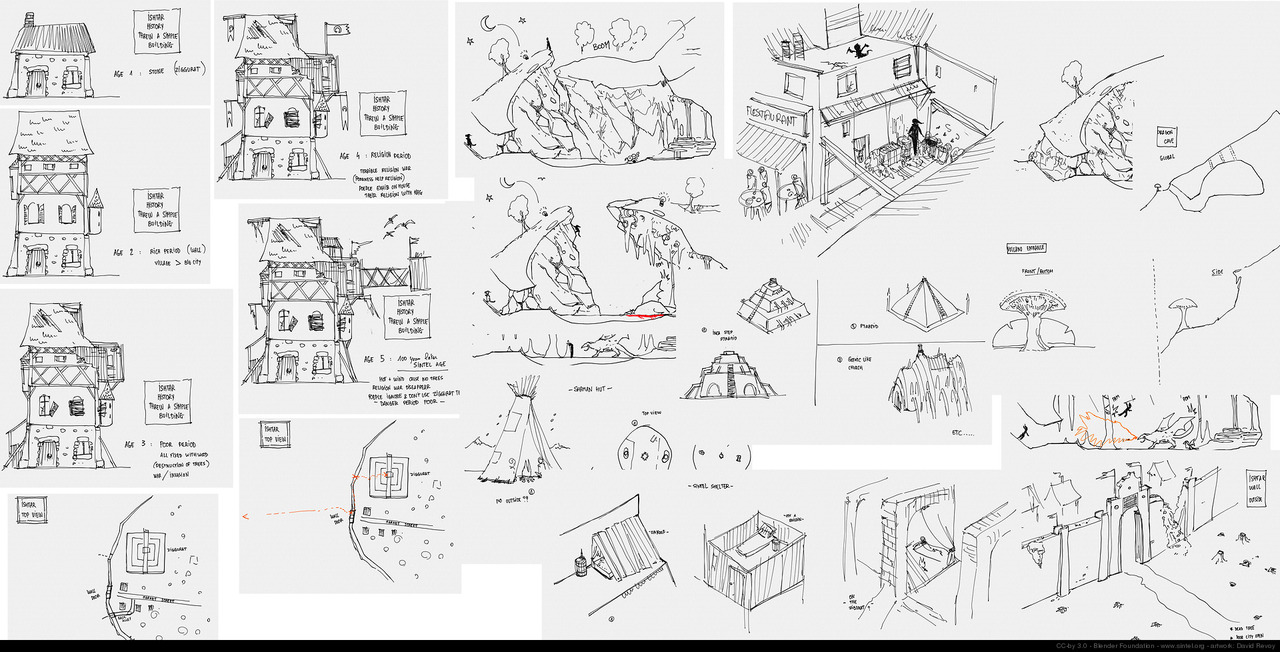 Various speed rough done in production to communicate with the team 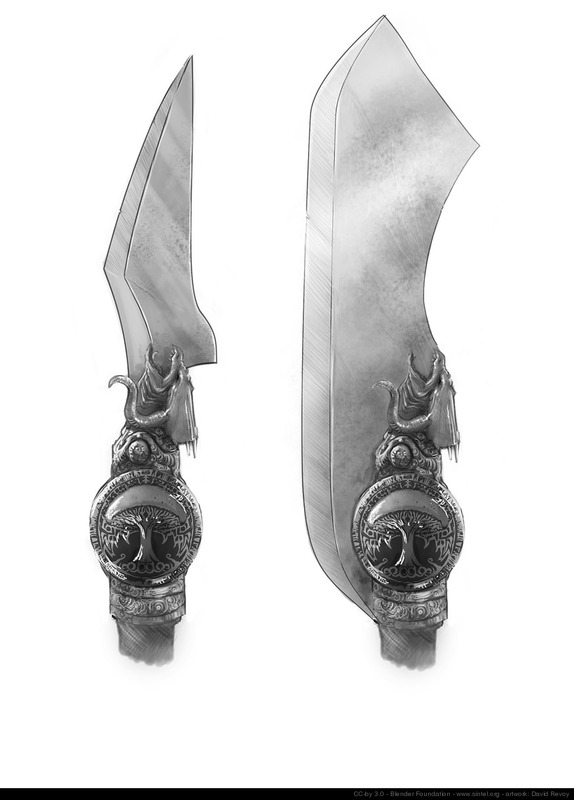 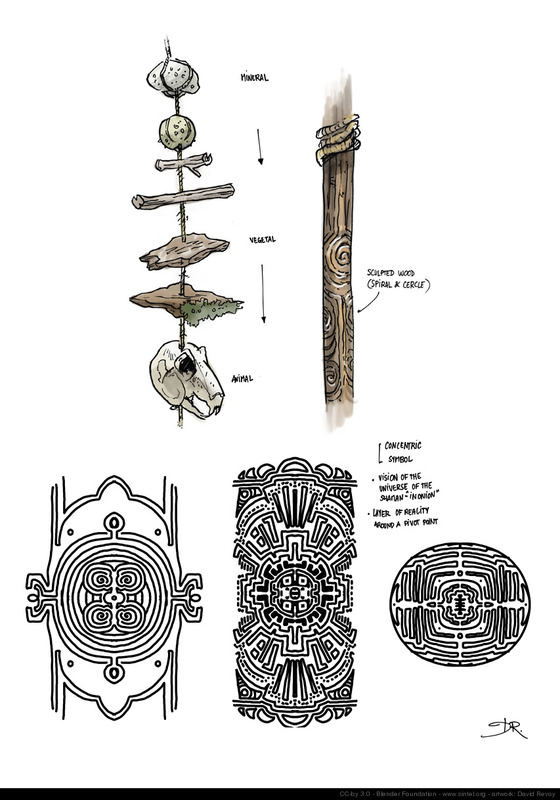 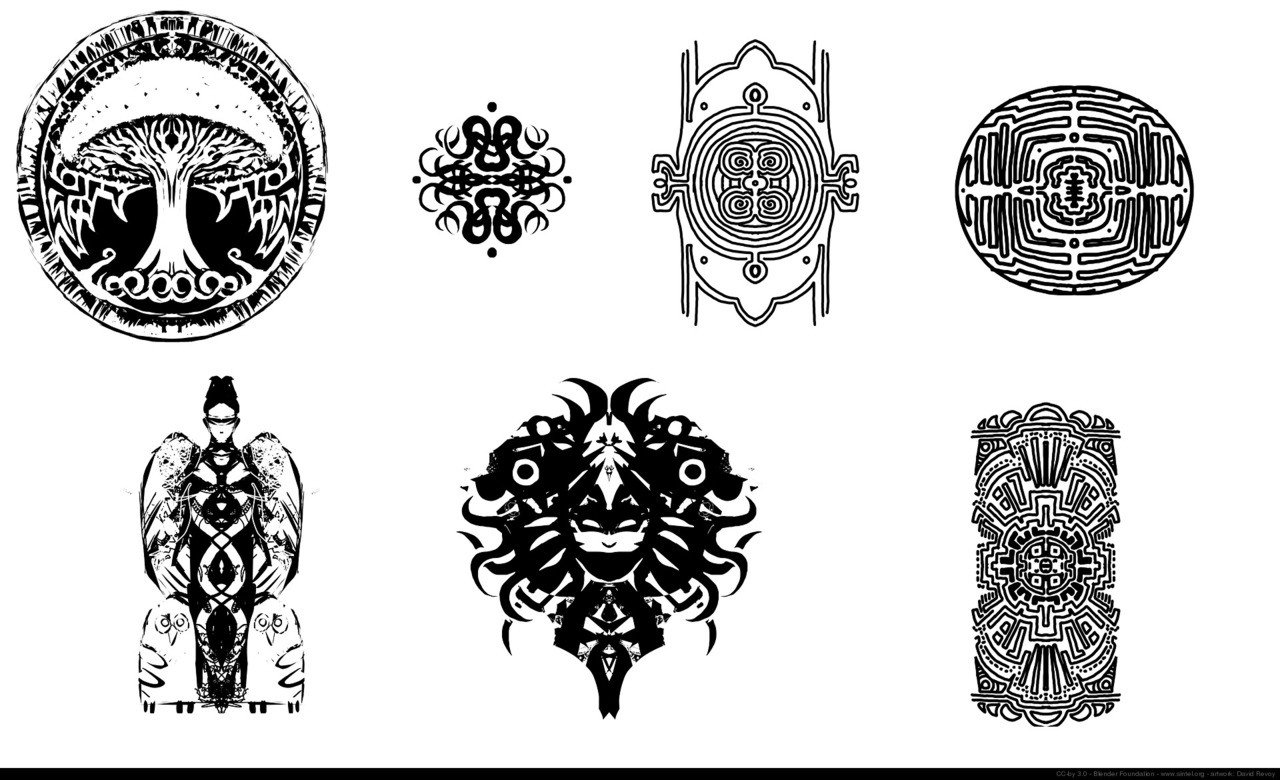 Alexandre Prokoudine interviewed me on his website Libre Graphic World about Sintel. You can read the interview here.

More on the DVD

All the source of the project are available on the Blender e-shop . You'll find on the 4 DVDs hi-res artworks, work-in-progress, and more. 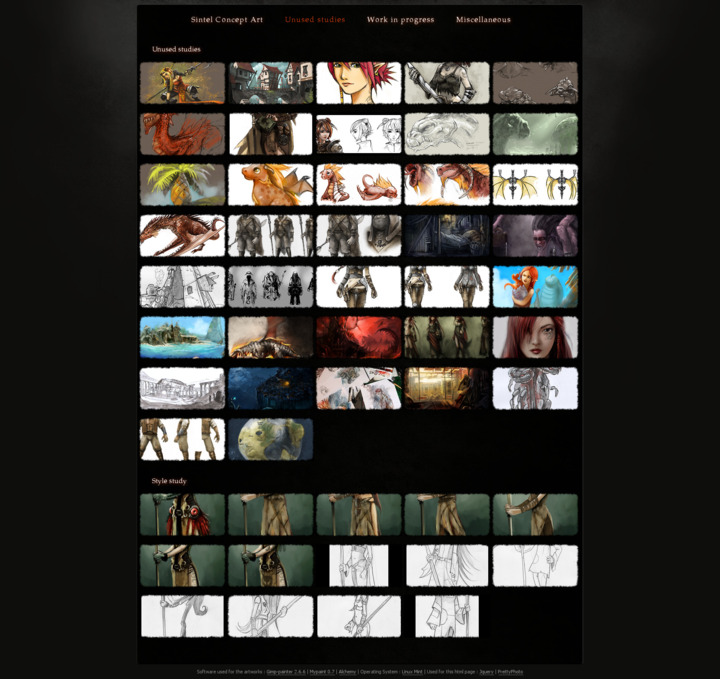 Here is a preview of the DVD-Rom gallerie , with unused artwork 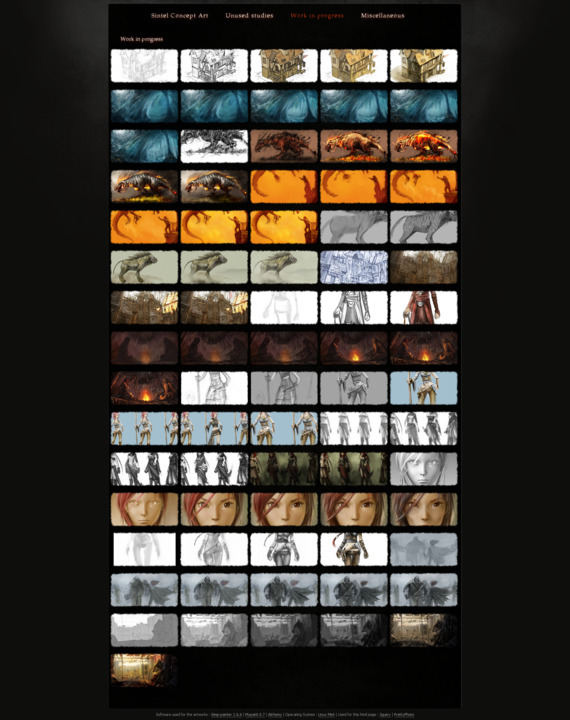 Here is a preview of VIP in the DVD-Rom , showing how artworks where made.

Storyboarding, colorboard, and other tools

Buy Sintel on the Blender E-shop

Next post
License: CC BY
David Revoy, www.davidrevoy.com, 30 september 2010.
Unless otherwise mentioned in the article.

It's Amazing! Congrats for the great job, i'm looking forward to my copy of the dvd! Greetings from italy!

Really great work!, looking forward for all the extras : )___

I just started messing around with Ubuntu, Gimp and Mypaint inspired by what I've seen in your DVD Chaos and evolutions, and I'm eagerly waiting for the box set for all the extra content! Thanks for all the effort you put into showing other peoople your techniques, for sharing your art and for being such a source of inspiration!

Thanks for all the feedbacks about Sintel ; the team got a lot of them, and I was fortunate to did a projection of the movie yesterday evening in my city of Toulouse with the ass. Toulibre as well as a talk about it. I hope everyone will receive there DVD soon and enjoy the bonuses :)

Fantastic work! I love the movie and I love all you concept illustrations!

Hi David,
I have been following your blog for awhile now and I learned about MyPaint from your tutorials and discussion about it.
This Movie is amazing and I hope there is plans to continue the story. I hope to order your DVD: chaos and Evolutions soon.
Have fun ant the Blender conference!
~John

Depressing ending. What would it have cost to have the baby dragon imprint on her for the last 3 seconds. (Before she commits suicide.)

WHAT DID YOU DO!!!
Killing off her very own baby dragon! My three daughters watched this accidentally (over my shoulder, they just LOVE dragons and the lot), and they were totally devastated! They cried for minutes! Lucky for me (and you) you hinted at a second chance with Scale's baby...

Thanks , our director and scenarist ( Colin Levy, and Esther Wouda ) did a great job to not have a predictable ending. I'm happy it still works.
Sorry if it makes children cry :) Here I did the concept drawings, and helped into visual choices ; I'm happy they liked the cute baby dragon.

Amazing use of open source programs to produce a fantastic story. It's amazing what the Open Source community can do when given the chance.

Thanks Dennis for your comments, and about your article on your website ( http://dennis-graves.info/?p=213 ).

It doesn't just make kids cry it nearly made me cry...and I'm a 26 year old guy.

But I also have a 2 year old black lab that I love to death that I know I will end up bawling like a little girl when I eventually have to put her down. :(:(:( Even the thought of it...nearly 15 years from now...makes me start to tear up. :(

Sad film...but oh so great. I probably wouldn't have been nearly as great without Scales' death.

art is nice your writer suck dick though. went out of you way to make it a sad story for no reason. thats not a twist, or good writing, just fucked up

I loved the movie!!! Great animation and story,but I didn't like ending. Would it be okay if you make some kind of extended version without modifying the movie itself but at the end of the credits a short showing that Scales is somehow still alive. Example: The camera showes the collapsed cave entrance then it goes through the wall than showes Scales with his eyes closed then he takes a deep breath and opens his eyes. You don't have to do that I just thought it might make it better for emotional people. Still a great movie!!!

David Revoy is really hat’s of now just waiting for his next project, his work always inspiring me think new and innovative.