Here is a post were I present the workflow I used , research and concept-art done for my graphic novel posted in a previous blog post 'l'heritage en couleur' . 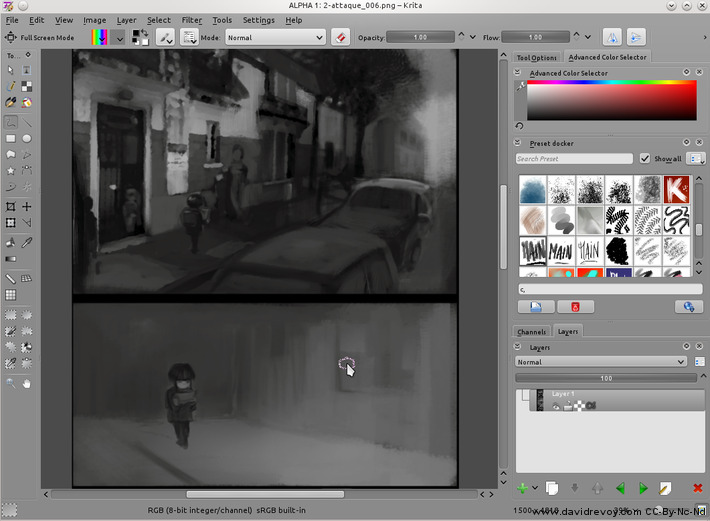 After the story was written and concept done , I drew the storyboard ; a very rough version to see if the story works visually. I used Krita mainly to paint the storyboard. I painted it keeping the width of 750px and used openraster *.ora to work with Krita and Mypaint. I kept low details. 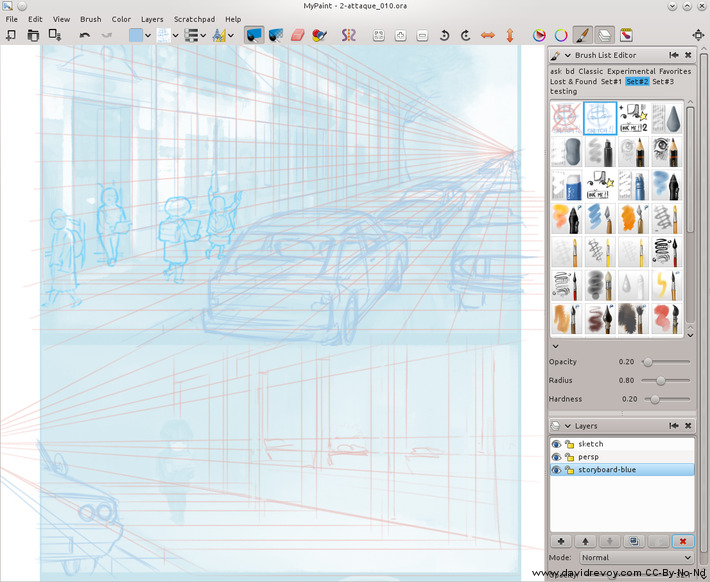 For this second steps , I resized my pages to 1500px large to be more confortable with zooming and drawing details. My storyboard get converted to a bright blue transparent to use it as a guideline, and I drew over on 2 layers with Mypaint : - " sketch " where I detailed most of the character and object - " persp " where I drew perspective guidelines with red.

I made 2 new presets taking advantages of the 'save color' ability of Mypaint (on the picture : the two first preset in my list ; red, and blue sketch tool ) to switch tool faster during the production.

Perspectives works were easy to do thanks to the new feature 'straight lines' developed by Optigon for future Mypaint . Also, infinite canvas were perfect for vanishing point outside of the frame. Of course drawing outside involved to do a cropping manually later on all page. 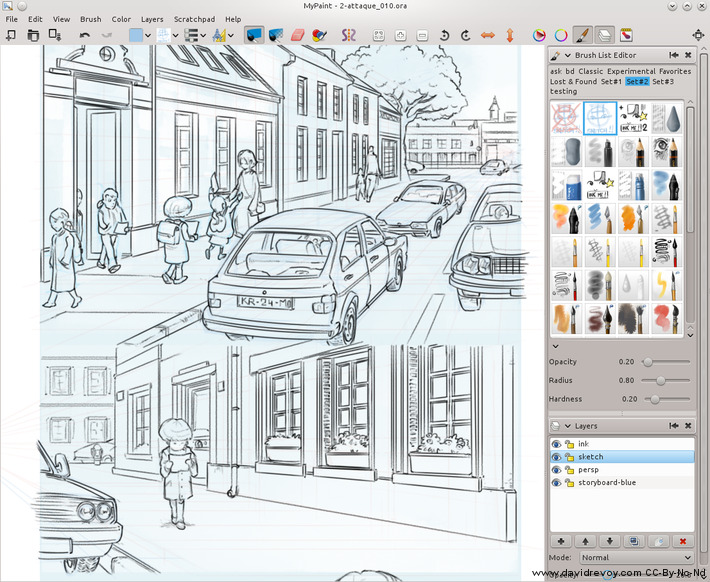 The inking was done also in Mypaint, but this time using my Cintiq21UX tablet. It was the first time I used it specificaly for a production.I think it was a wrong choice : - Cintiq is hot and makes unconfortable works after 4 hours on it - having eyes so close to the screen on a long period made headaches - distance between nib of the stylus and screen pixels is quite large for a precision work - finaly the precision and resolution is not very good ; I felt like I had to fill pixels on a grid.

The good point compared to a traditional media inking is : - the luck to work with a super eraser who don't hurt paper - a undo. - have layers , duplicate some parts etc... - avoid complex scanning time with traditional

Optigon drawing tools were also precious for drawing building and perspective on the fly. I could ink without stress to miss a line, but still it wasn't comfortable and still frustrating to deal with the Cintiq. 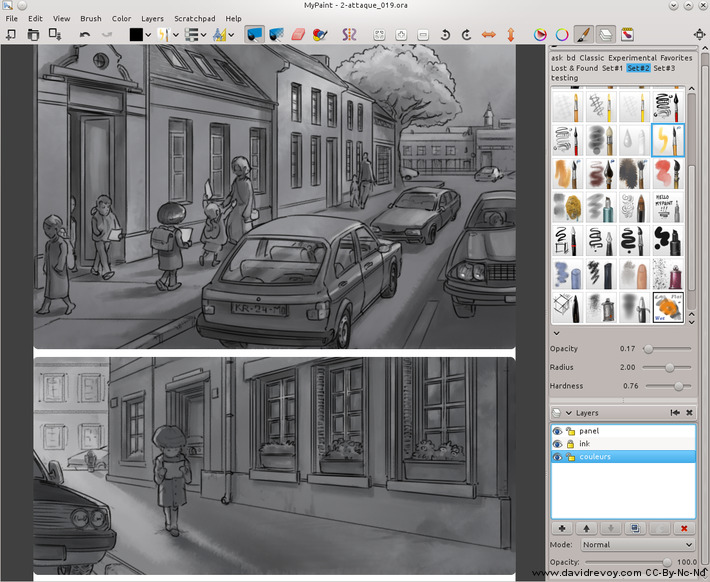 Now my page are cropped to the final size x 2, sketch layer cleaned and I also added a 'panel' layer , where are drawn the frame separators. Krita is perfect for doing all this task over the open raster files.

As my graphic novel was mostly in black&white , I colored all the novel in a first pass with grey. I used the watercolor preset of the set #2 in Mypaint for it. I also customized and added 2 new presets ; one to details while still keeping a sort of watercolor fringe , and another one, a bit bigger who simulates very strong watercolor wet diffusion effects.

Working with value is easier to focus on the depht of the picture and shading. This is something I liked to do and who was effective. 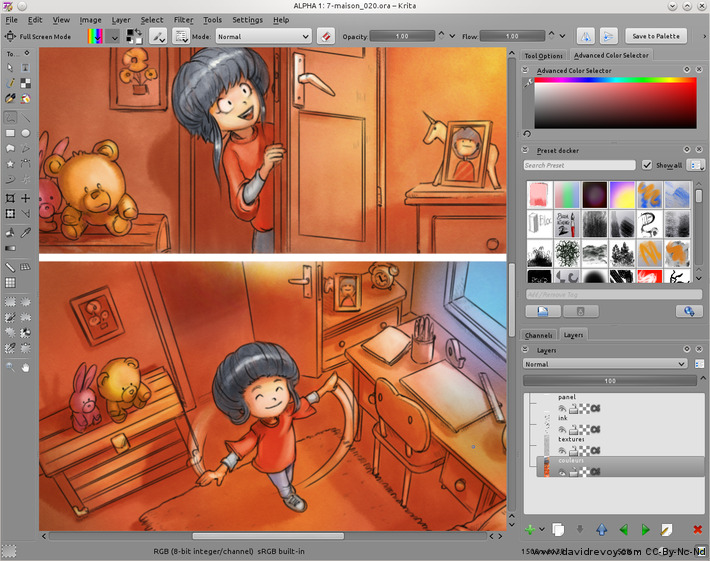 Thanks to the value already managed with the previous step, it was a easy and fast task to color all. The only difficult things were to keep consistent with the color palette from one frame to another. I could use the palette dockers, but this one have to be reloaded each time on Krita. So I used as a workaround a layer with a mini palette on it.

The last touch is a very light paper textures layer above my colors , in 'overlay' blending mode, to break the "digital flatness".

Final pages were exported using a custom bash script using the software calligraconverter ( a CLI tool installed with Krita ) ( to convert page from .ora to flat .png ) then the temp *.png was processed within the same script with imagemagick for resize to 750px , compress to web , and sharpen a little bit. I made this custom script as a KDE services.

II ) The research and concept-art :

Here under a sample from a lot of research I did for this comics. I kept brainstorming about technic , style, rendering, and workflow. You'll see on them an attempt to draw all the comics on real pages, pencilling , inking and scans , 3D layout, speedpaintings , etc... All the joy of starting from scratch :) 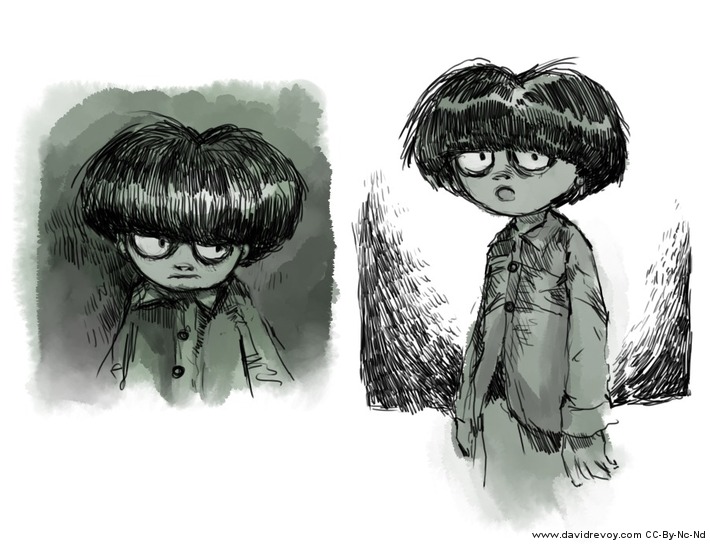 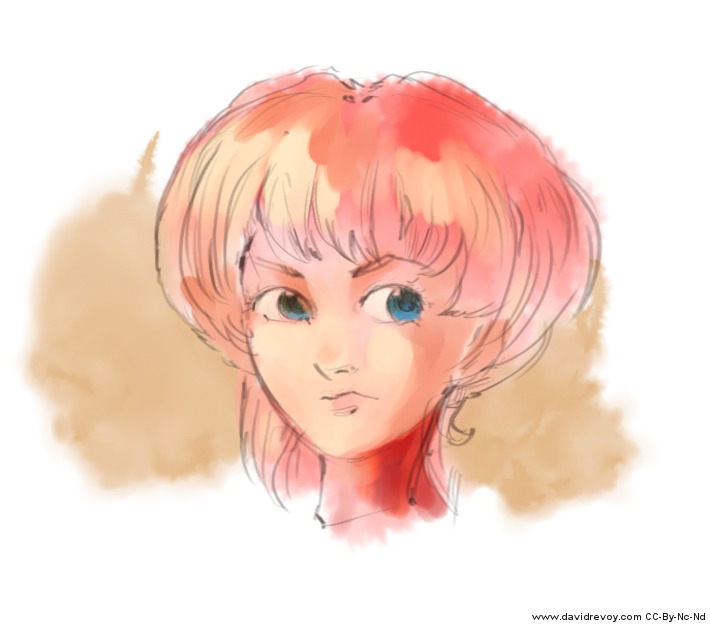 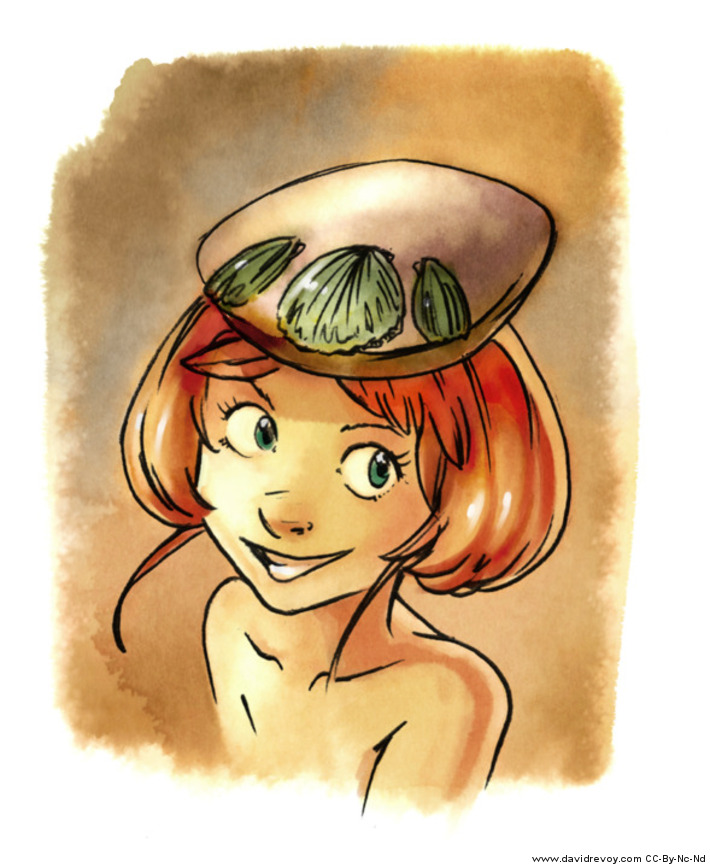 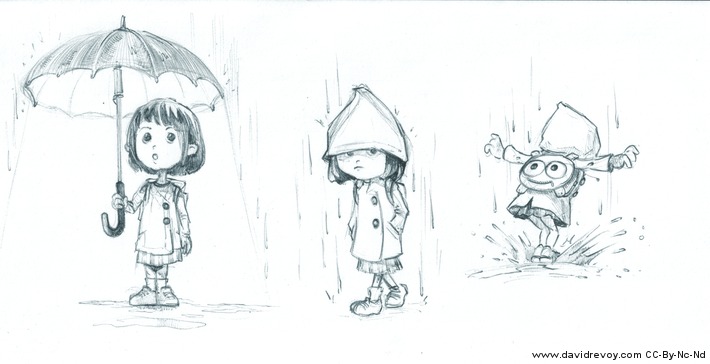 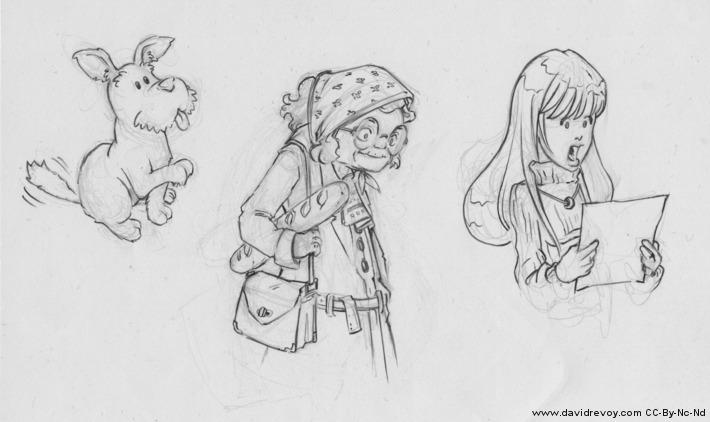 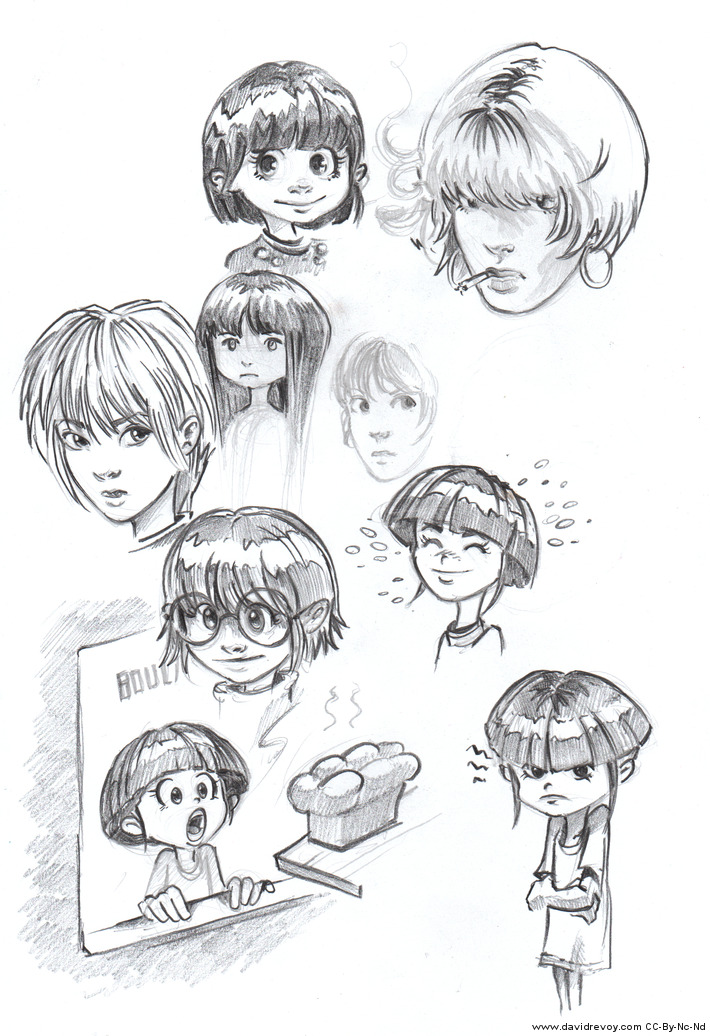 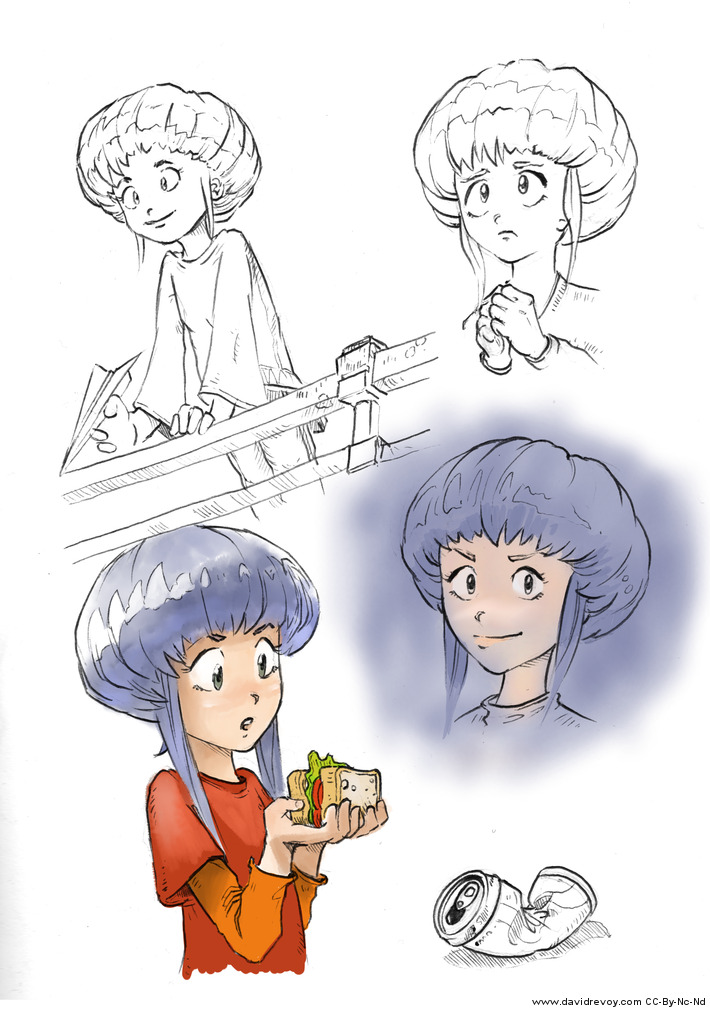 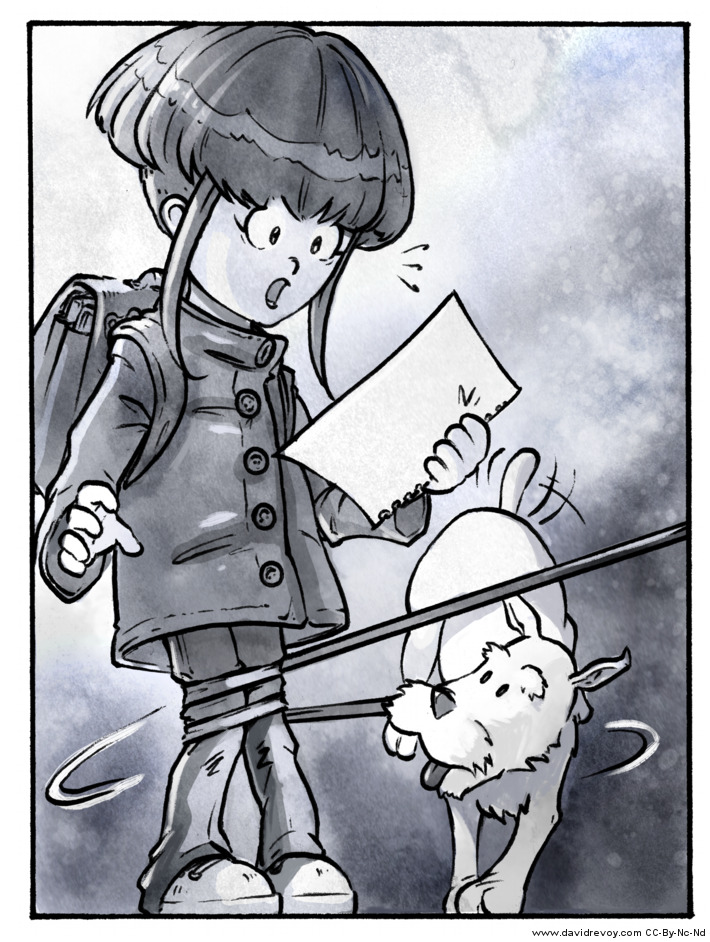 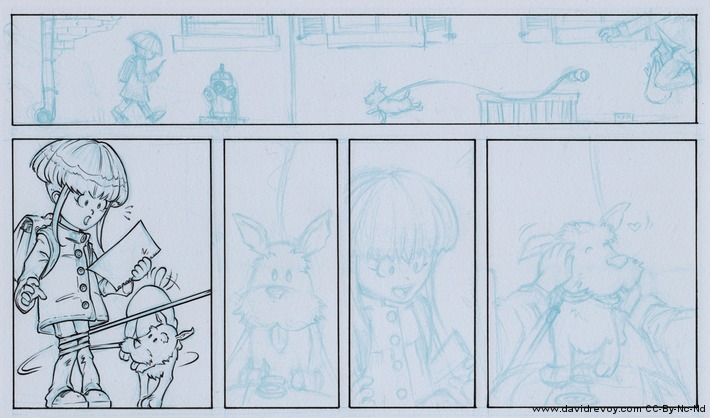 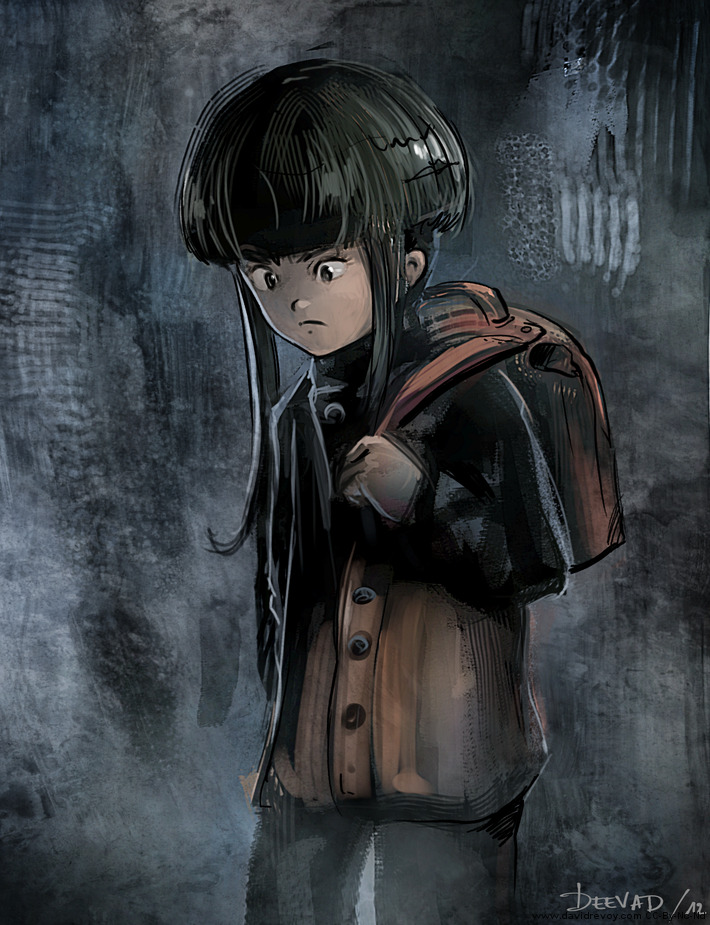 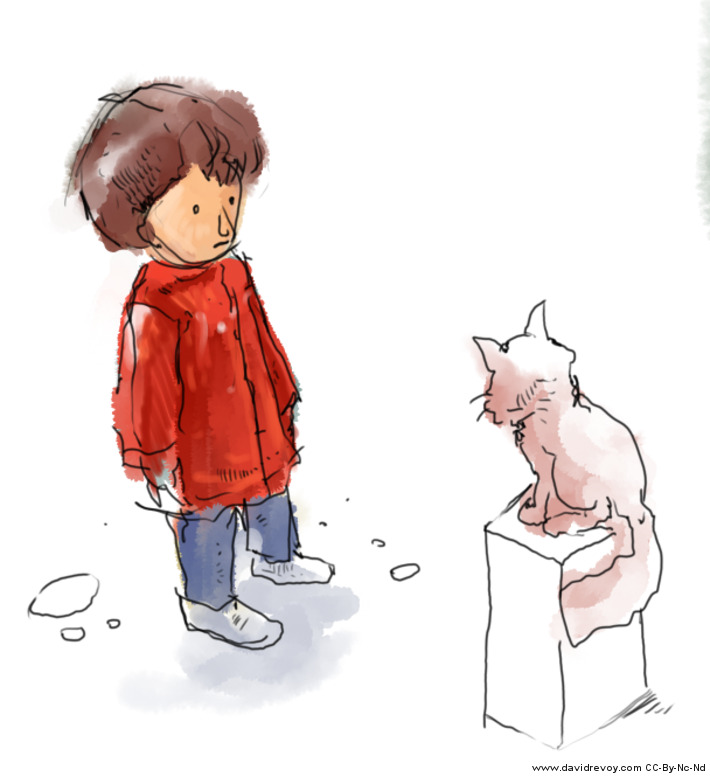 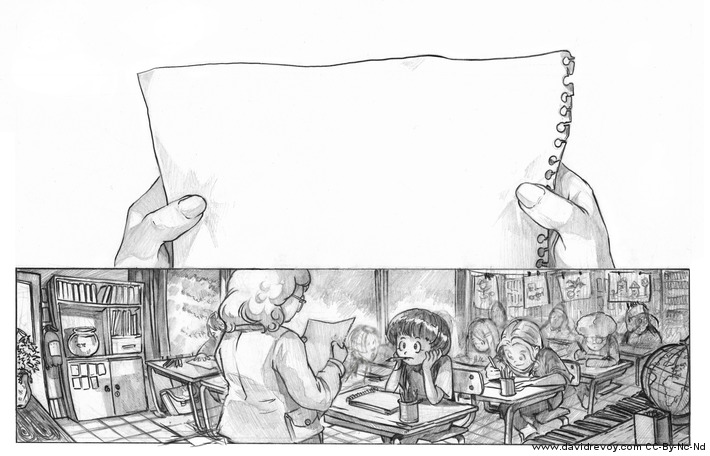 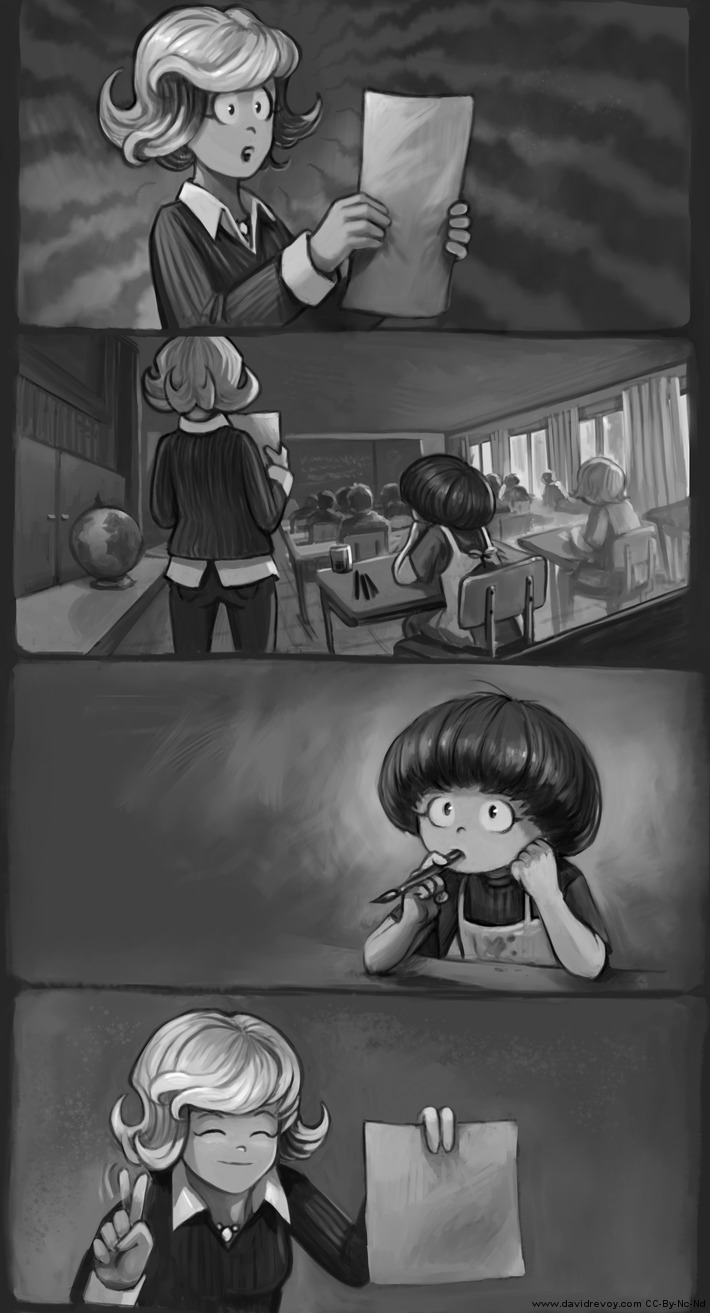 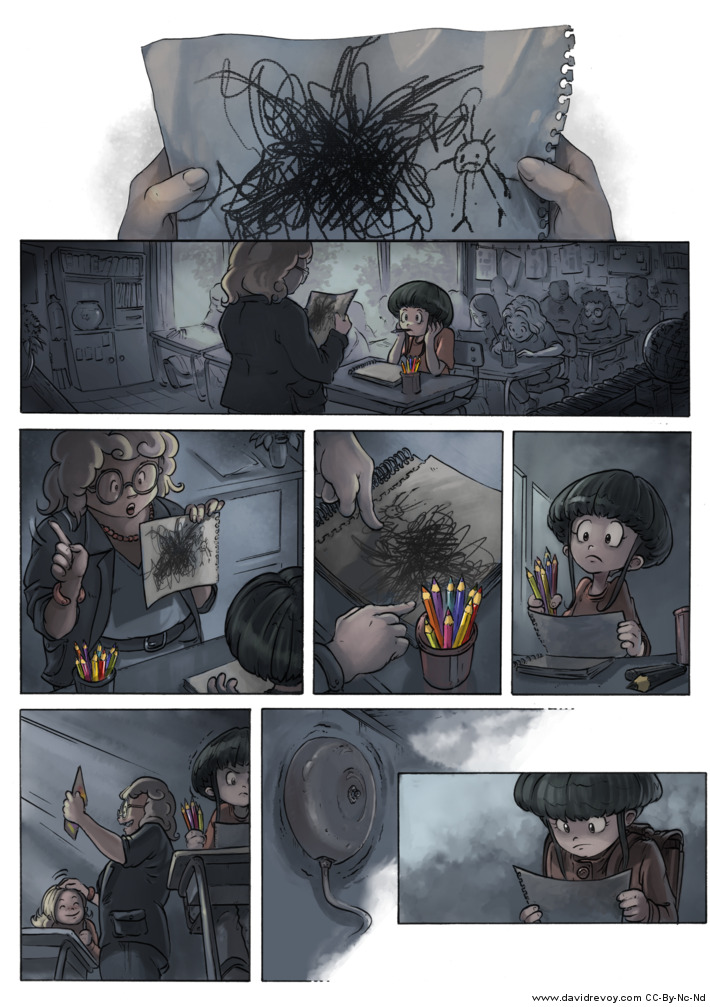 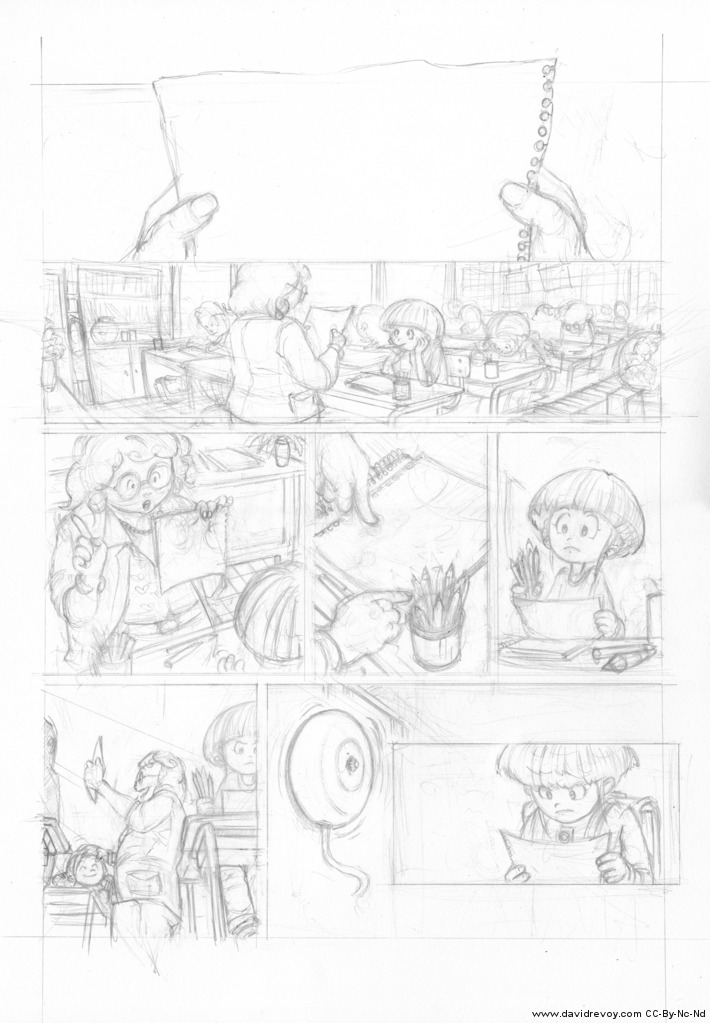 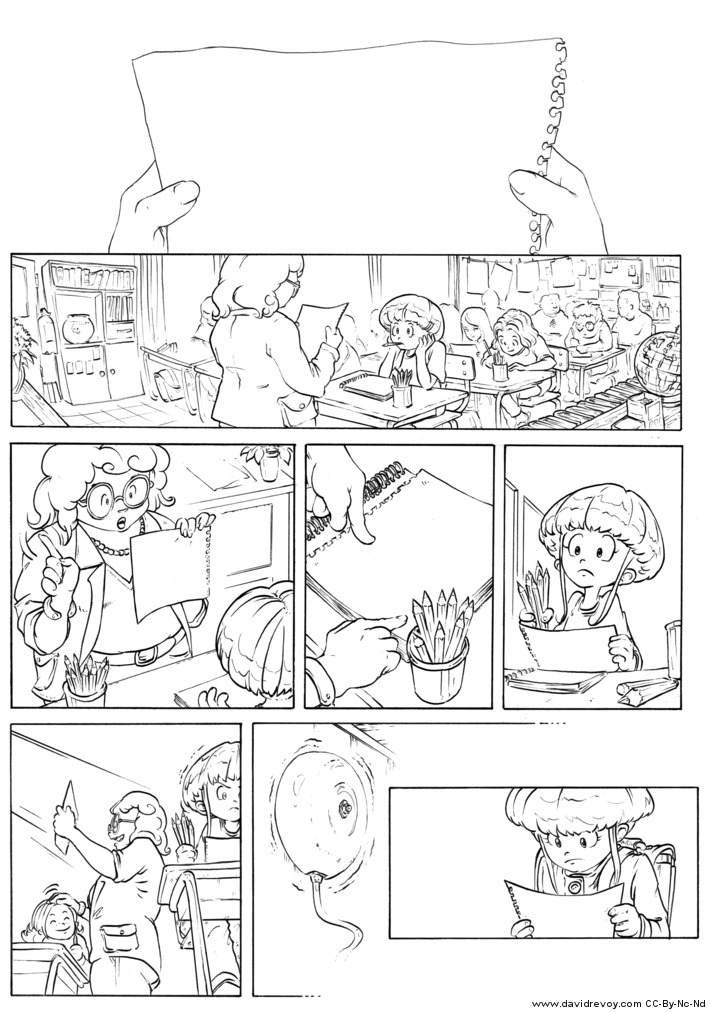 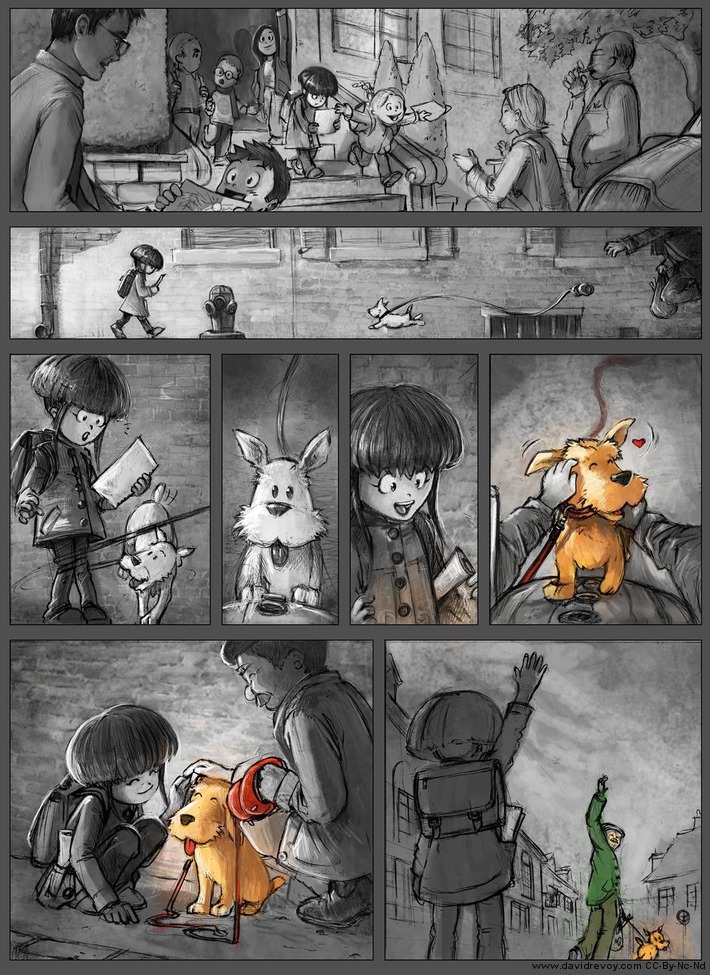 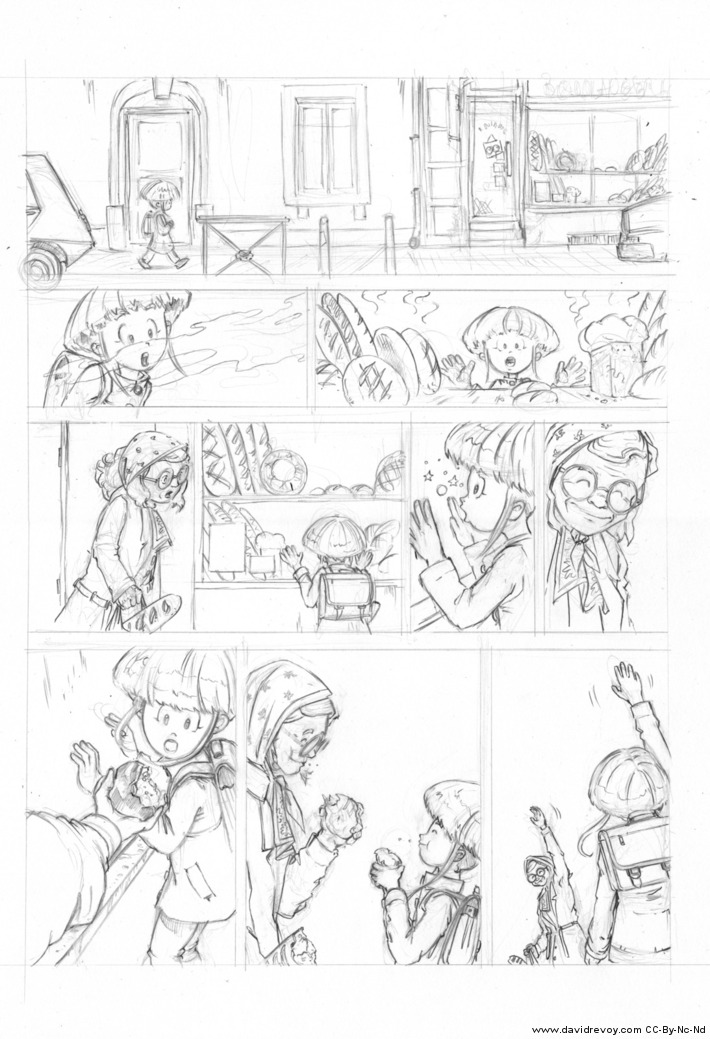 I had fun to make this graphic novel ; but I spent a lot of time doing sketch, trying format, testing workflow, etc. If I could finish it, it was thanks to a pack of great updates on the tools I use, so thanks Krita and Mypaint teams. For the next graphic novel, I will also try to avoid the usage of the Cintiq ; if I need to do line-arts now I know I better have to do it on paper.

Next post
License: CC BY
David Revoy, www.davidrevoy.com, 8 may 2012.
Unless otherwise mentioned in the article.

you rocks! =D
very inspiring. thanks!

Bravo David! no more to say. just enjoy these beautiful sketches. Is nice to see how you have been explored lot of different ways to do it.

Your technical posts about how you did your work are always very interesting.
This making-of makes me want to try technics like those...

Really good! Thanks for posting it...Now...Could you tell mewhat version of Mypaint you're using and how can i installed it(ubuntu)? Thanks in advance

Hi! I mean " install it", i found this site that show it :
http://xubuntugeek.blogspot.pt/2012/05/install-latest-mypaint-in-xubuntu-ppa.html
Thanks for posting the screenshot that made me want to go after it! ;)

@deburger : Hey thanks for always posting super encouraging comments. Thats really keeps me on energy, to have comments from long date follower. Thanks !

@ZZDas : thx, you can find all about my system and the softwares I use here : http://www.davidrevoy.com/article116/kubuntu-12-04-install-notes

Thanks for sharing your process! Nice job

Thanks for sharing David! its great to see Krita and MyPaint working together. By the way one thing I really like about MyPaint that Krita doesn't have... is your set of brushes (Deevad4) I use it all the time and I also like the nice icons for each brush!

@Brett McCoy : Hey Brett, thx also to be always around. Nice to see you around the Krita channel and forum too. ( btw I studied your Xfce choice more in details , and I'll try a switch of my laptop today to Ubuntu studio 12.04 ; and I maybe tempted for my workstation as well ; for performances and simplicity )

@Jose Navas : Thanks for the feedback about the brush preset. My kit is evolving slowly on Krita, and I'm still far from releasing it as it is still a sort of 'beta' and links between mask / textures / presets are so messy on my install ( and so, my naming and icons for the moment ). Textured strokes and Smudge 'dulling' in Krita 2.5dev is also totally bringing tons of new possibilities. Big thanks for Animtim who maintain mostly alone the default kit in Krita.

Always very interesting. Few artists explain how they work. It's like for a magician to tell his tricks.

I'm happy to know the Cintiq helpfullness is not proportioned to its price, because I've no money to buy it. I'll stick with my intuos4 for a very long time.

I keep reading good things about this cheap tablet that also has unofficial drivers for linux:
http://frenden.com/the-little-monoprice-graphics-tablet-that-could/

Thank you for taking the time to blog and explain your workflow, this interesting and also motivating for us developers. I also enjoyed the result, the emotions of your story seem to be quite authentic.

@Maxy : Hey, thanks for commenting here Maxy.
( for other reading comments, Maxy is the creator and main developer of Mypaint ).

Absolutely amazing! :D
It' always such a great motivation and inspiration to visit your blog.

I really hope that there will be a stable version of krita for windows soon. I am currently experimenting with the instable version and it seems to be an excellent programme for painting!

@artbottle : krita is great ; thanks ! For the windows version, it's not evident as there is only one maintainer working hard on it for the moment ( the Krita leader ; Boudewijn Rempt aka Boud ).

Really helpful ...it's time to have a try with Krita!

Love reading these posts! I have one question though, why don't you want to use a standard tablet for the line art? Is it because of hand-eye coordination or something like that? Thanks :)

@Stramaz : thx, have fun with Krita !


@Durand : Hey, many thanks for the feedback! For the hand-eye coordination and the Cintiq ; yes , in a way the Cintiq helped to got the 'pure line' effect. With a traditionnal tablet I perform more little and short strokes , because it's hard for me to make a complex curved line with it. On Cintiq, it's easier to draw those curves, because 'you know where your hand goes' and the feedback is immediate. But still ; drawing pure lines with the Cintiq wasn't something as pleasant as on paper where the precision, the line control is 10x higher.
I have to try also with a traditionnal tablet to see if with a little bit of training I can't reach the same control. I'm sure it's not impossible at all. The usage of Cintiq here is mainly to 'test' it in a personal production , or to find a usage for it.
I m in a trip right now and I have fun with a A5 tablet and a laptop drawing in Mypaint as I rarely had. It produce short strokes and less variation of width in the line ; the result is also less pure and a bit more draft. I may post them soon.

Your work always inspires me.I always get fasicnated by it.It is beautiful in every sense.Greetings from Pakistan :)