Geekfaeries festival was very good! It's a festival happening every year in the start of June and located in the center of France, at the castle of a small town named Selles-sur-Cher. Of course, because of the pandemic, the festival had to skip year 2020 and 2021. So, the Festival of 2022 was full of challenge for the team behind the event. Their catchphrase this year tells a lot "We did it!".

On my side, I first was in contact with the crew for an online event; where I gave a livestreaming with Krita. I think it was in 2018. This year, I was a guest. And being a guest in a festival of this size and history was a real honor, and I measure it even more now I'm back home. I really enjoyed this time.

I wish I could show you a video, tons of photos, and a fragment of the experience as if you were there; but unfortunately, I had not a lot of medias because my mind was elsewhere managing the IRL aspect of the event. (Note for later: I'll try to document next events using my Mastodon account)

So, for the medias here, they aren't my own photos but I'm reposting the one I found on the Mastodon account of Maiwann, Lapineige and Mozilla Fr.

For the rest, I'll try to describe with text how was my experience.

On the first evening, right after around 7h of train; I had (with Pouhiou) a tribute to Terry Pratchett. On my side, I wanted to make a live painting. I asked the staff for a crazy idea; if I could do the video projection on the wall of the castle instead of having it inside of a large tent as planned.

The team Framasoft and the Geekfaeries staff did help me hand in hand and we quickly could test a powerful enough projector. We could also turn off the permanent light that usually light the castle by night and install a table and electricity outside.

Thanks again to them for trusting this project: the sky was threatening to rain and it could have been probably simpler to tell me "hmm... David, no" that evening. But instead of that, I had a full hour to paint a giant A'Tuin turtle; using a 10 meters large Krita screen projected on the Château de Selles-sur-Cher from the 10th century. 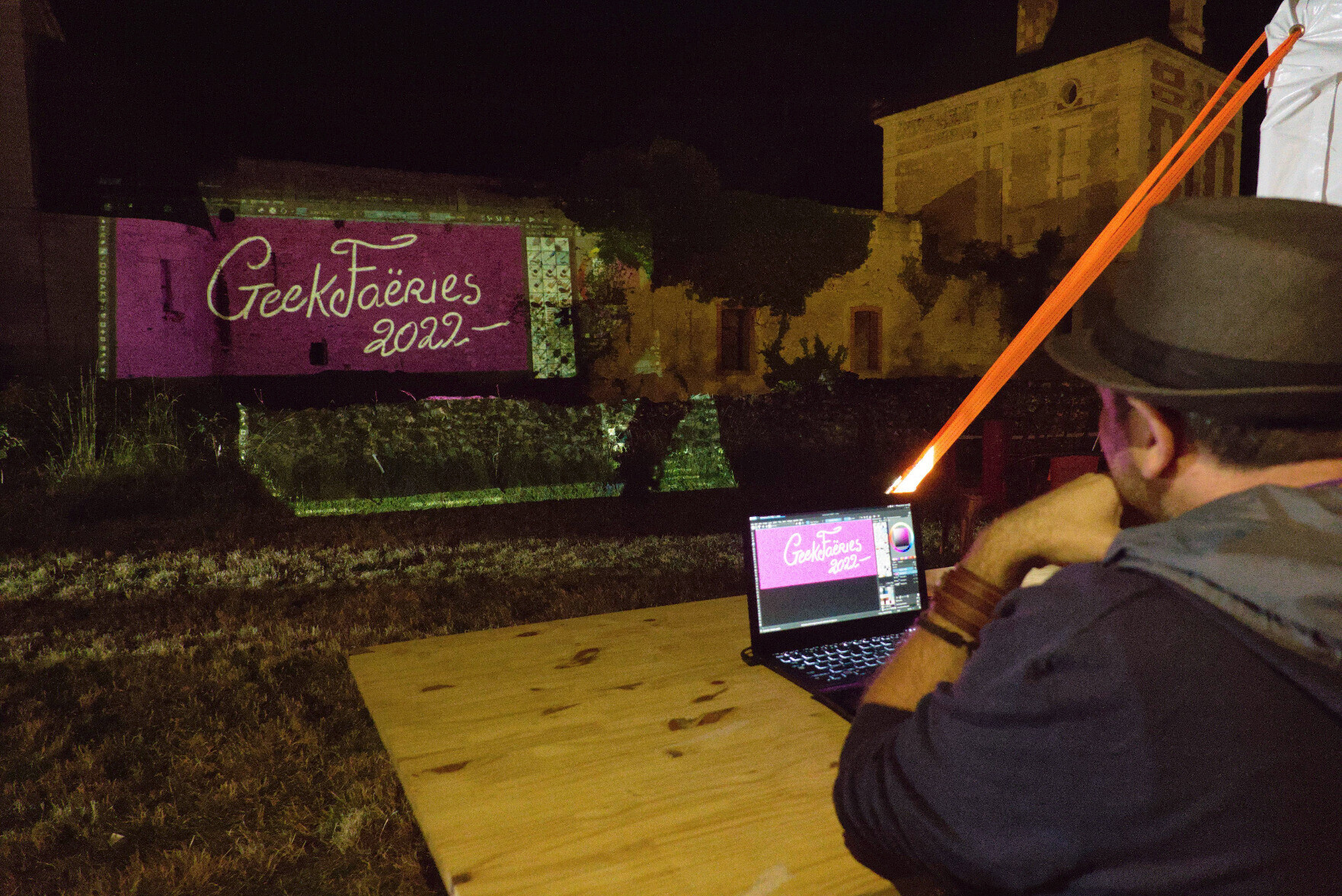 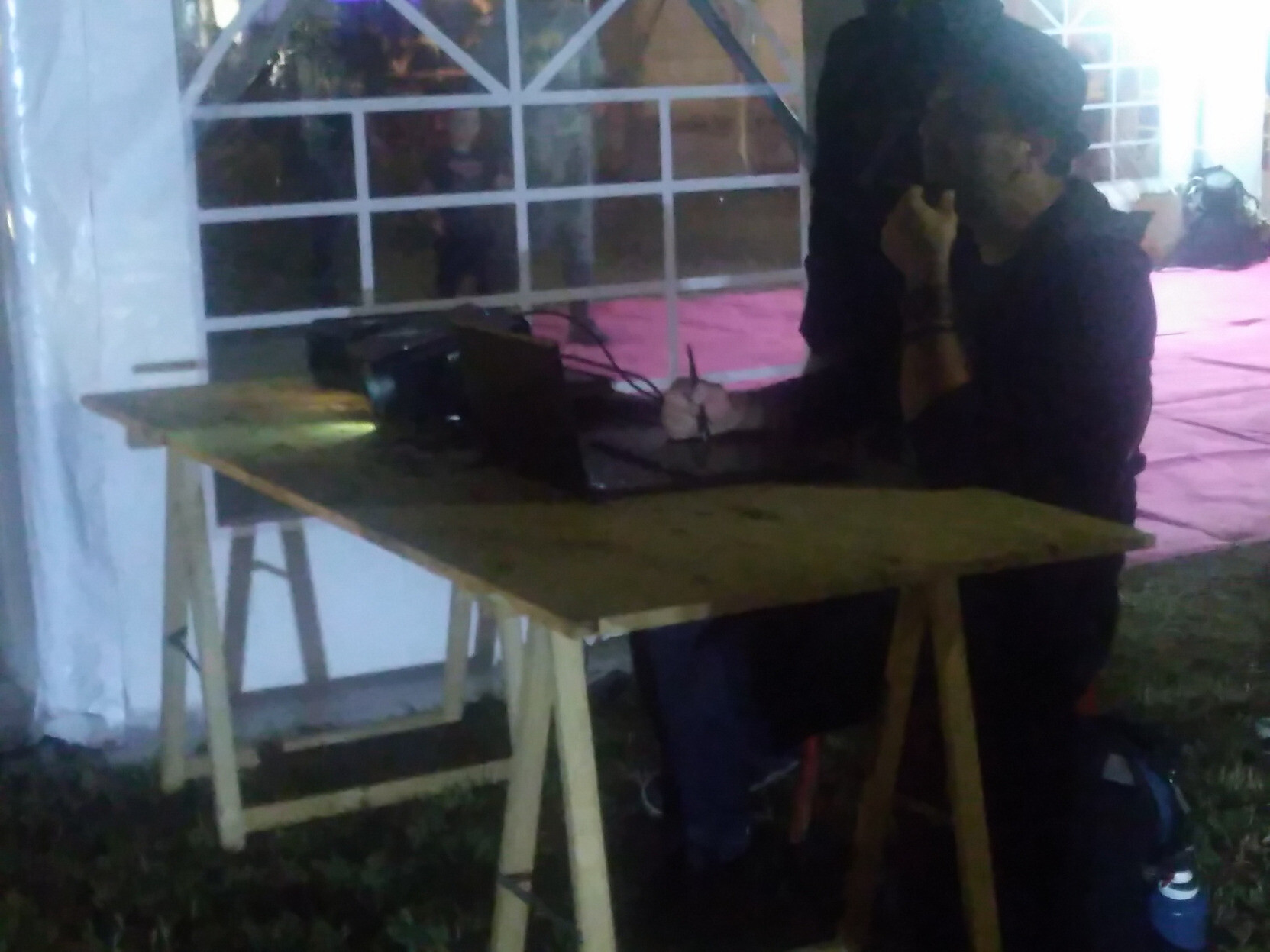 Me on my desk, laptop, tablet and projector outside the tent - Photo CC-By-Sa Maiwann 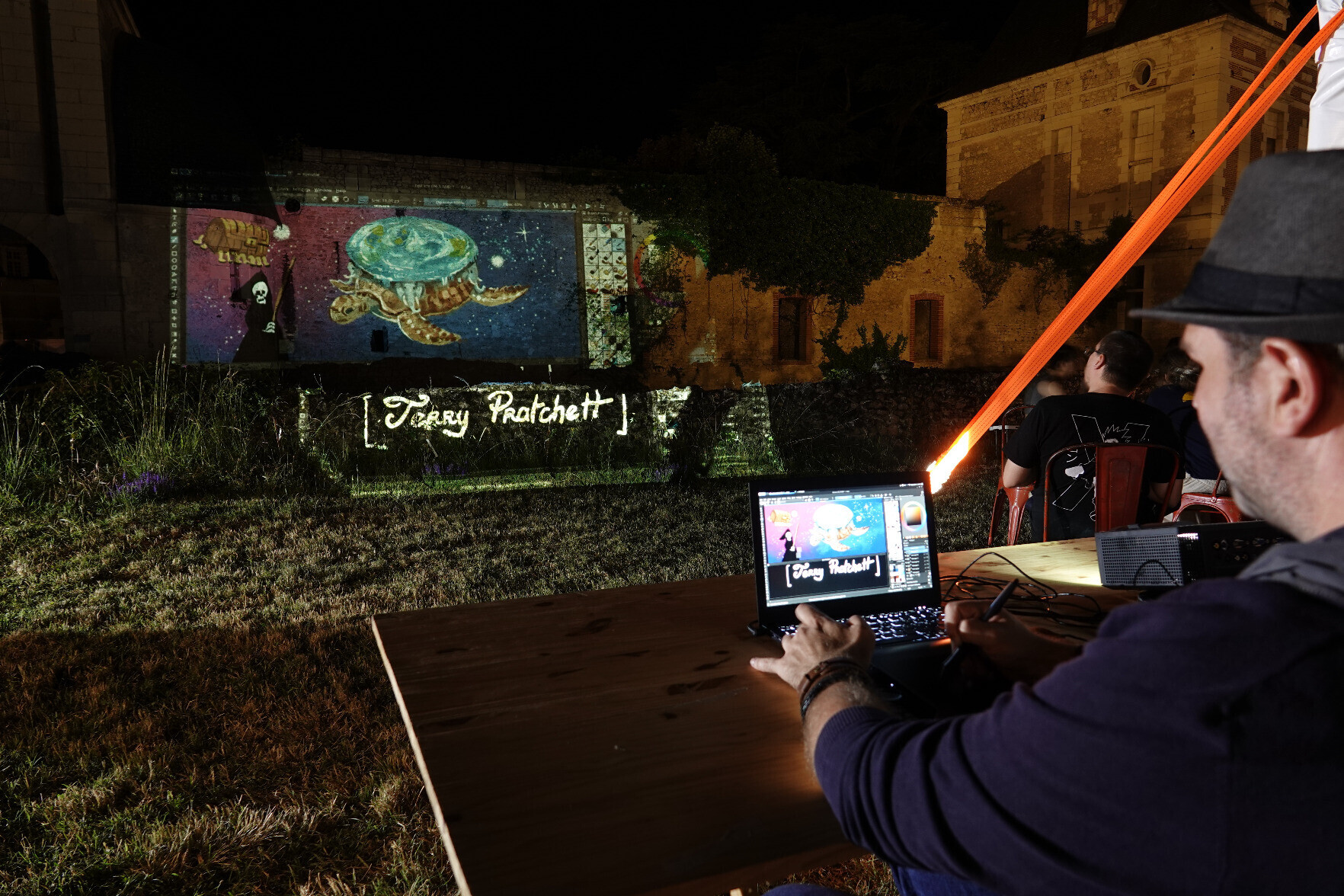 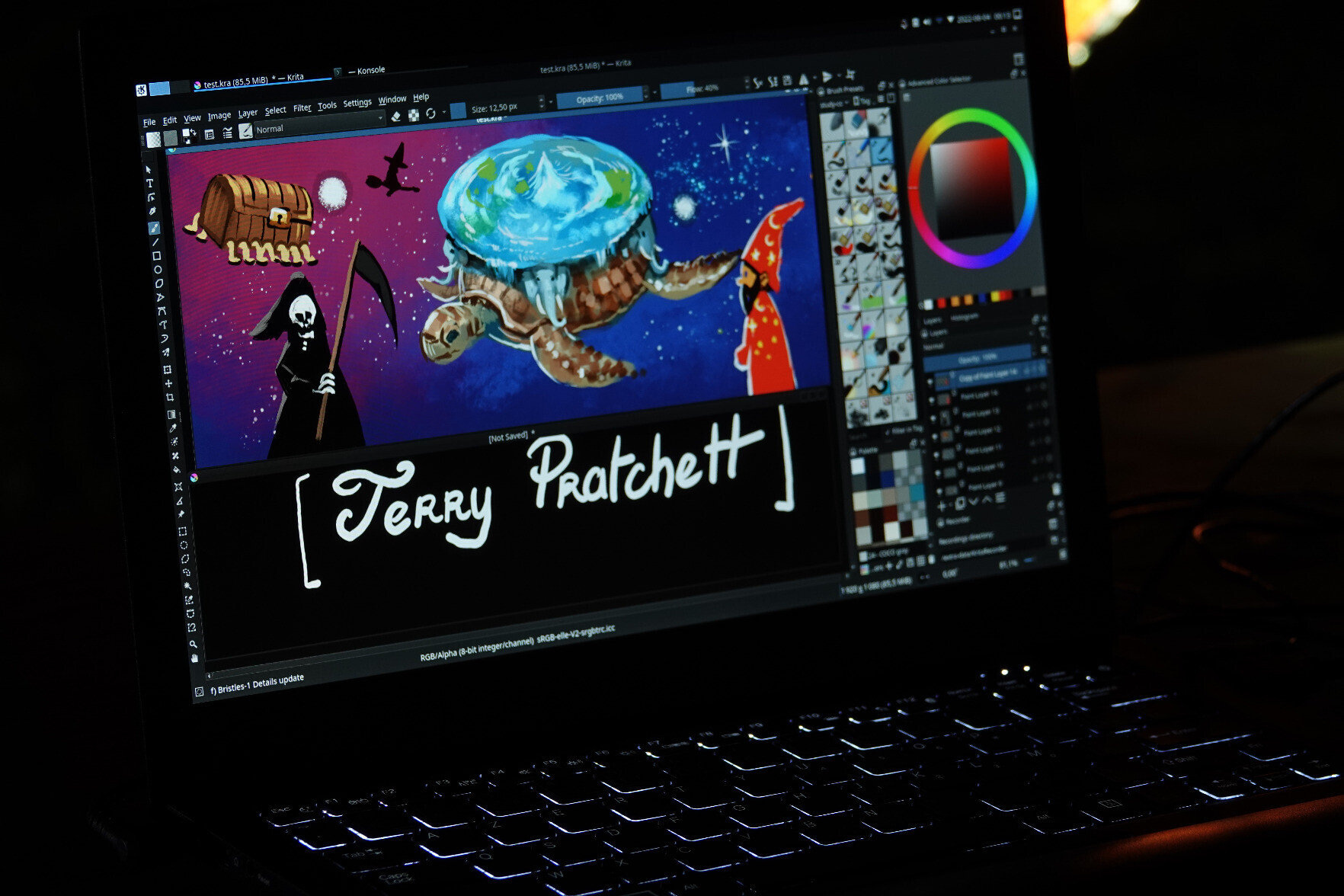 At the end of the session, a shot on my laptop by night - Photo CC-By-Sa Lapineige

Clearly, I fulfilled my inner kid's dream that evening. Painting on a castle!

I later added the character of Death, Rincewinds, the baggage as well as the silhouette of a witch while we were talking about them.

As you can see on the display of my Purism 13 laptop, I was painting on the half top of Krita in a pretty low resolution for a painting (1920x1080 canvas). I had my Wacom Intuos 4 Medium with me for the tablet with not a large active surface; so it was tricky to paint 1 centimeter on the canvas, and get like one meter amplitude on the wall with a big offset for the color and contrast. But I could manage something so I was happy.

The talk about my FLOSS tools 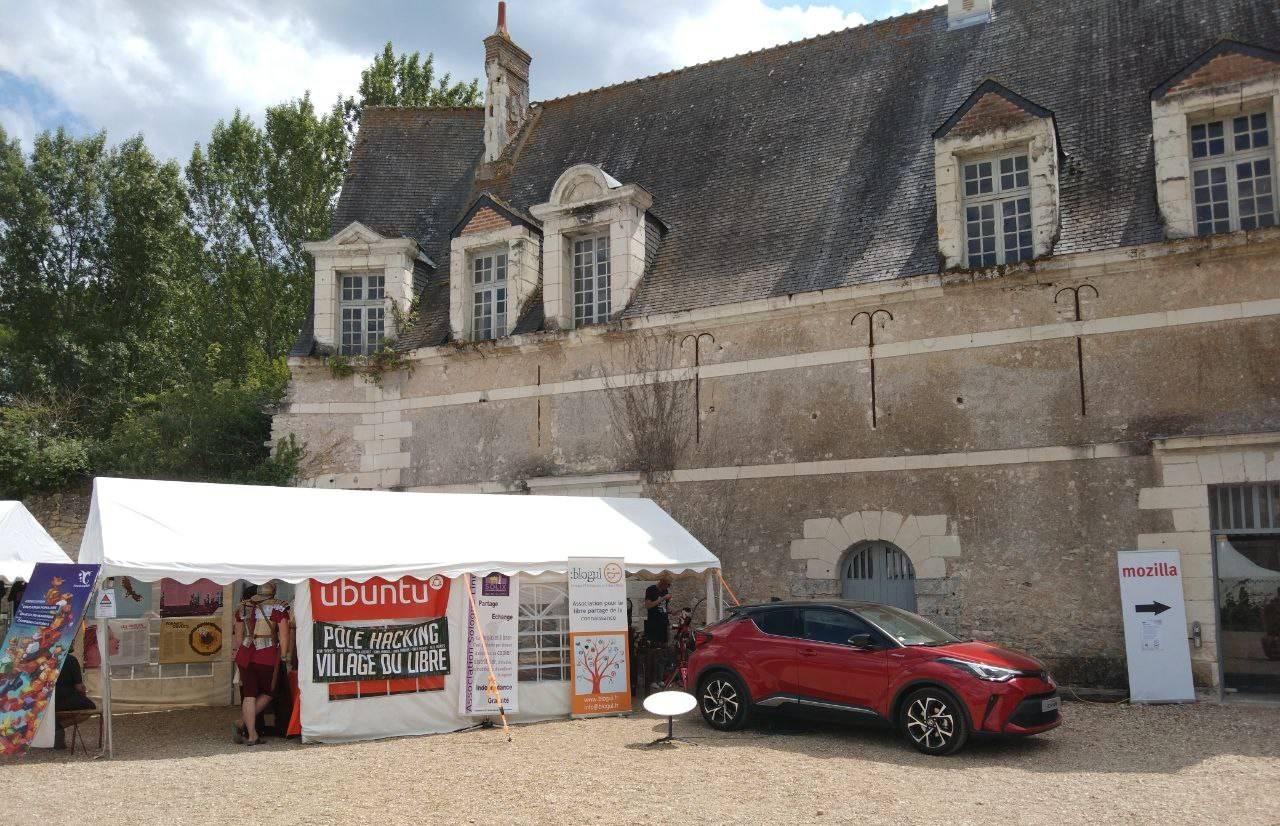 The Hacking Pole before opening; with booth of Ubuntu, Solix, April, Blogul, the car of RatZillaS with an open guiding system and the door to the room of Mozilla - Photo CC-By-Sa Mozilla Fr

On Saturday, I had a talk on the Hacking Pole about my Floss tools; a room where Mozilla Fr was showcasing booth for recording voice sample to enrich the Mozilla voice project. The room was empty when I started to install my laptop. The staff forgot to announce the event on the main tent at the center of the events, and this room of the castle being far away wasn't easy to find.

Fortunately, it was quickly fixed by the staff and I had a big "down then up" feeling when the audience started to enter and installed themselves. A half filled room! not bad after a totally empty start... Oh yes: I was almost convinced I would have to cancel my presentation that day. Maybe my topic about FLOSS tools wasn't interesting, maybe it's because it wasn't announced on the speakers, maybe it's because it was midday (the hour of lunch in France), or maybe it was because the room was a bit hidden. My theory: all of this at once.

The talk was in French and wasn't recorded and was an overview of what I did over the last 20 years and the changes that conducted me to use only FLOSS tools and start the Pepper&Carrot project. The presentation was followed by a Krita demo, where I made a demo of Gmic filters, colorize mask, symmetry tools and multibrush. Unfortunately, I had a crash during the demo -of course- Probably the famous 'demo effect'.

Anyway, thank you if you were part of the persons who assisted to my talk that day, your questions were very interesting. 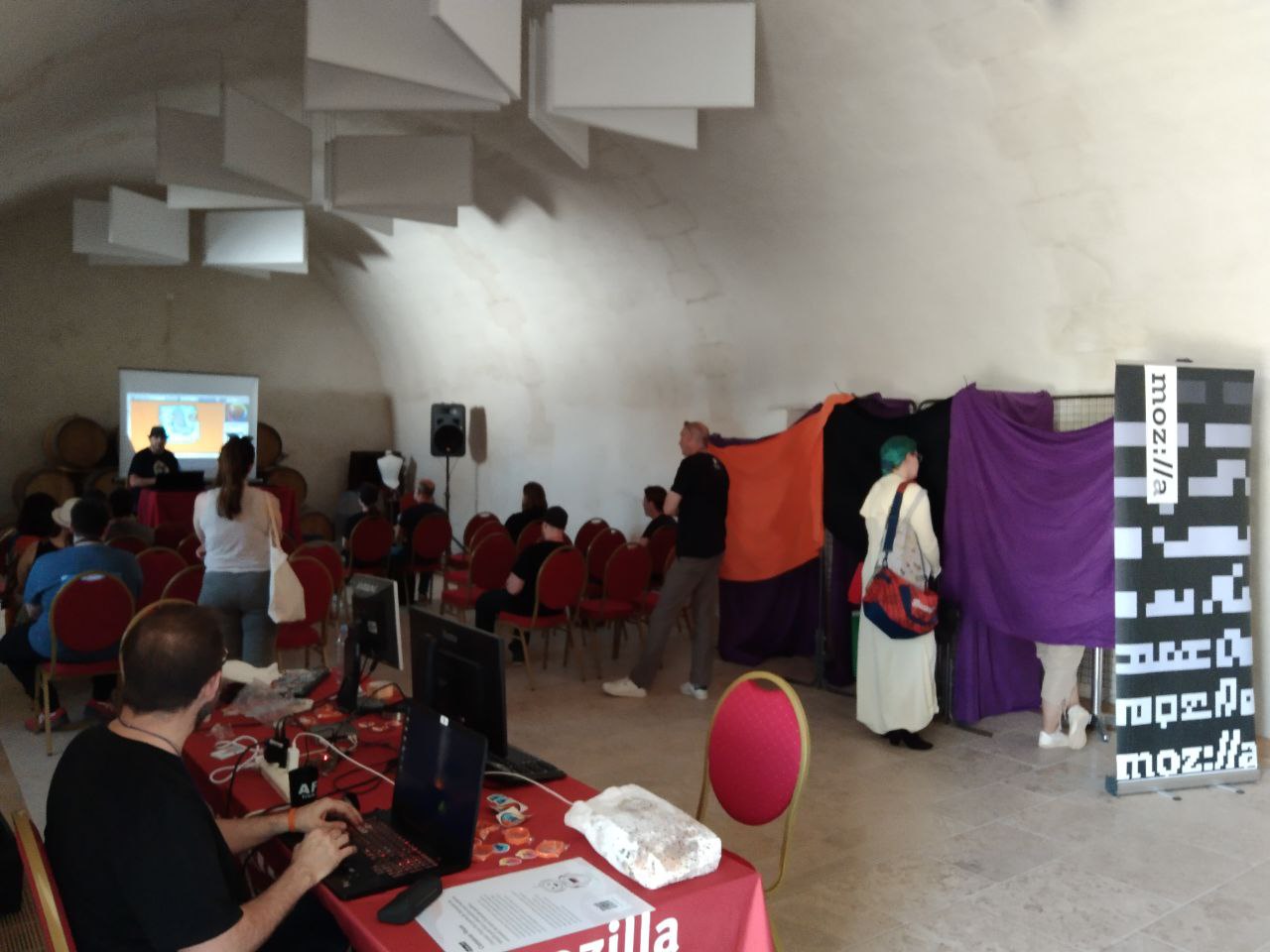 Signing session at the bookstore booth

Then I went to the tent were many items were sold on the festival; and among them the Pepper&Carrot comic books published by Glénat.

I could meet a lot of Pepper&Carrot readers from all ages sitting at my table. We had discussions about characters; Saffron, Coriander, Shichimi, Torreya, about what they expect to see for the next episode. Sometime speaking about their own derivations or projects. For me, all these moments were pure gold. I drew a lot "Dark Pepper" on the signing session; that's her appearance in the book 4 with the tattoos and the shreded dark robe. It was fun to draw.

The weather was super hot that afternoon. I remember I was suffering by empathy for the cosplayers wearing armors; Darth Vader, a Witcher, a Minecraft character, the numerous furies in full suit...

At the end of the afternoon, all P&C books available on the store were sold. I was proud of it! (in all honesty: the stock of available books wasn't that big, but I usually prefer to hide this part when I tell the story 😋).

A big storm happened that day at the evening; turning all crowd inside the tents. The air became breathable again and temperature did drop a few degrees and that was very welcome.

Unfortunately, the storm also canceled the big concert on Saturday evening and Geekfaeries staff had to run everywhere to check the tents, the electricity, and protect the installations. 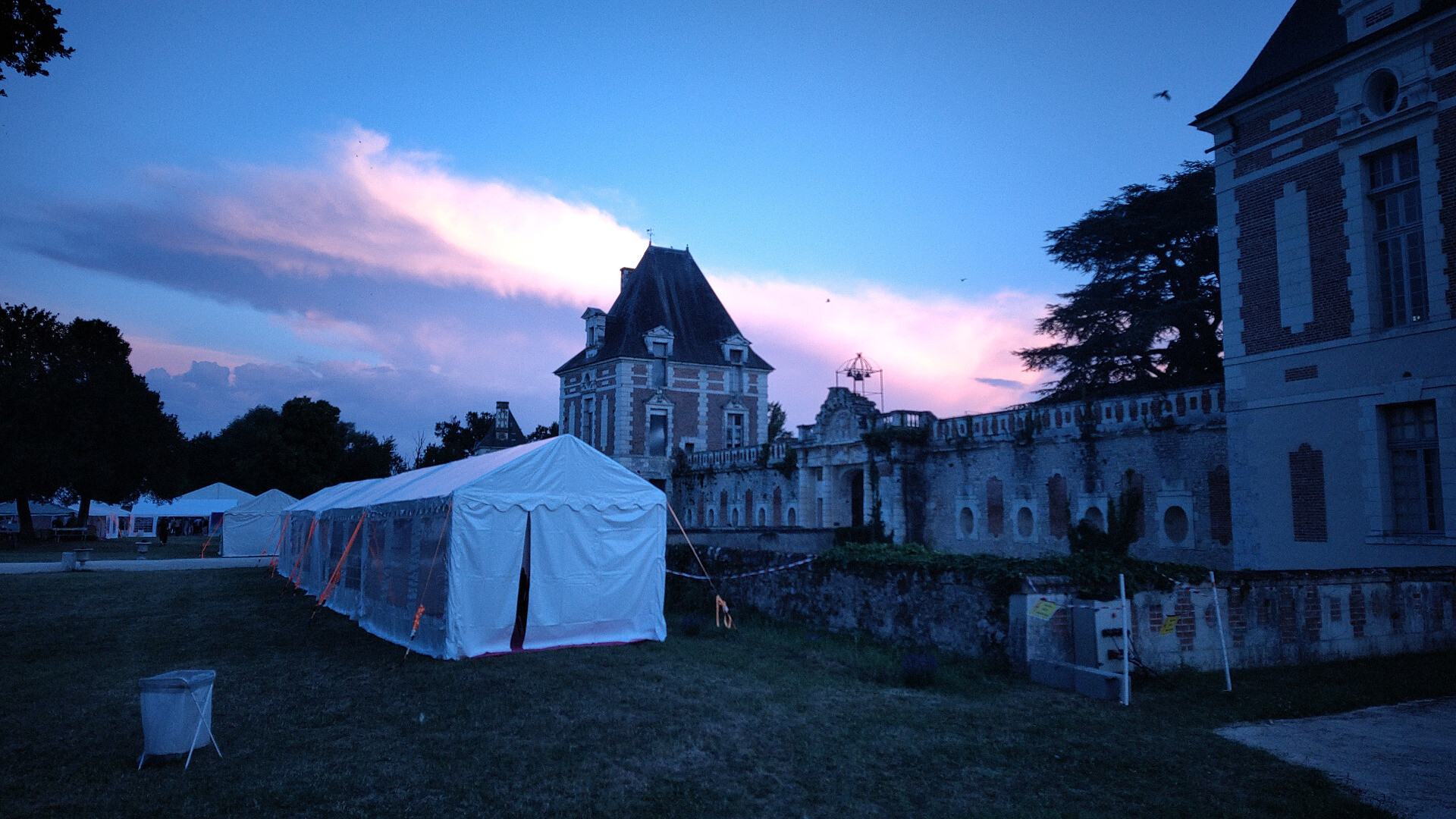 The bookstore was in these tents in foreground, a photo before the opening of the festival - Photo CC-By-Sa Lapineige

On Sunday, with no more Pepper&Carrot books available, my presence at the bookstore booth was useless. So, I decided to enjoy the festival and just started to walk around and assit to talks and meet other. I then ended into a spot making a watercolor of the castle; a stationary position were I could continue to meet Pepper&Carrot readers and sign the comic they took on their backpack. 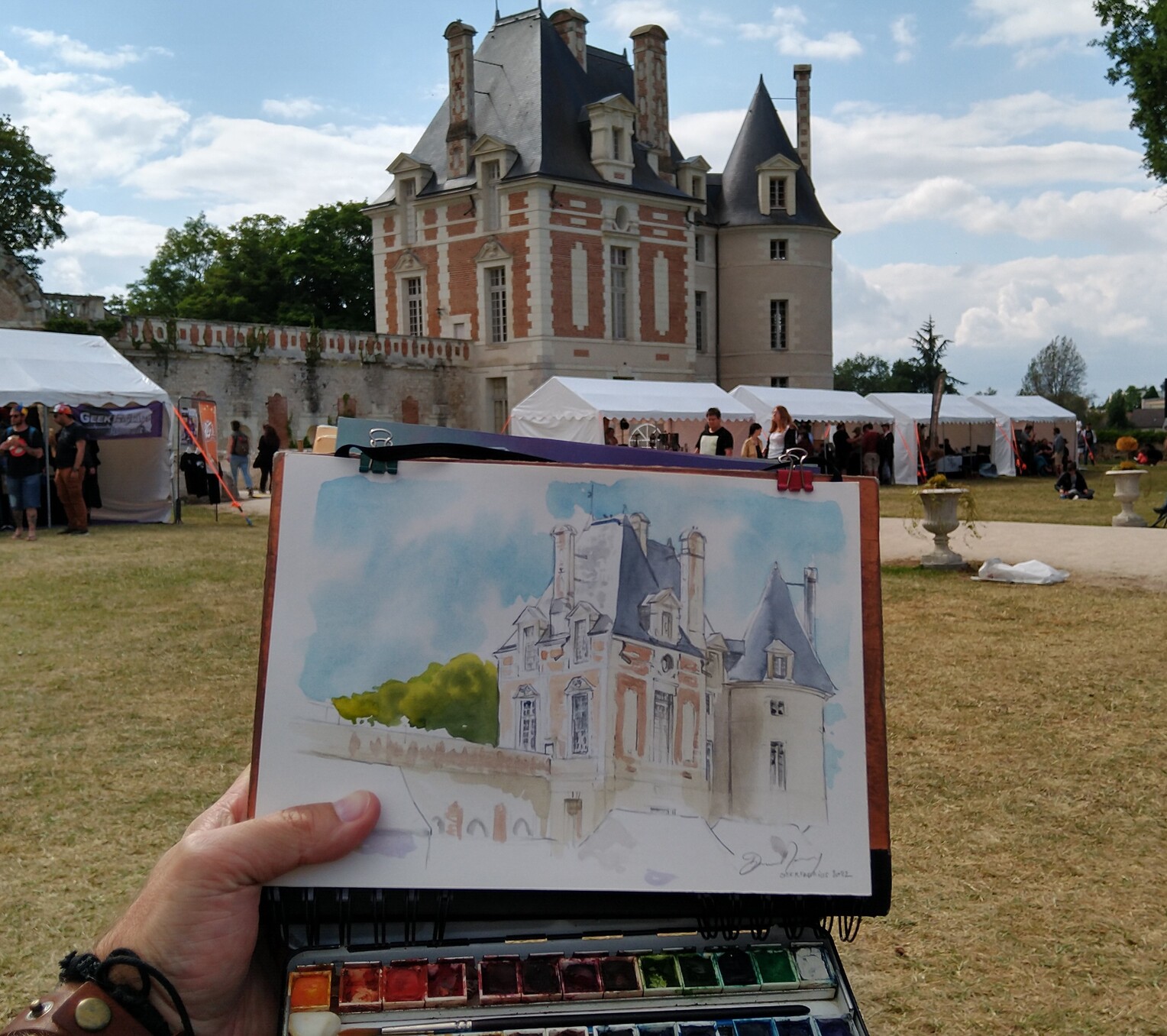 A watercolor I made of the Château de Selles-sur-Cher for Naya, the founder of the Festival - Photo CC-By-Sa D.Revoy

All in all, I had a very good time meeting readers, and all guests were super friendly: Le Tropeur, Bruce Benamran, Korben, RatZillaS, LinksTheSun, Hacking Social, Framasoft team, Mozilla, Ubuntu... and more! I could discuss with them on many topic, or simply have a drink and share a good laugh.

A big thanks also to the big staff of the festival, I started to met them and they all were always very friendly and helpful. That was a rich experience and I learned many new things. Finally, it's good to be part of a big event like that after being at home since end 2019 for pandemic reasons. I missed IRL events. I hope I'll be able to comeback next year!

Next post
License: CC BY SA
David Revoy, www.davidrevoy.com, 8 june 2022.
Unless otherwise mentioned in the article.

Nice blog post! Seems like a great event :-)
For those who don't know the festival, It would have been nice to mention where it took place – it doesn't say so in the whole text (unless I missed it); only that there is a castle and probably in France.

Thank you, and you are totally right. I was still too much 'in context' after the event that I haven't even thought about writting the location. I'll try to fix it now somewhere in the introdution.