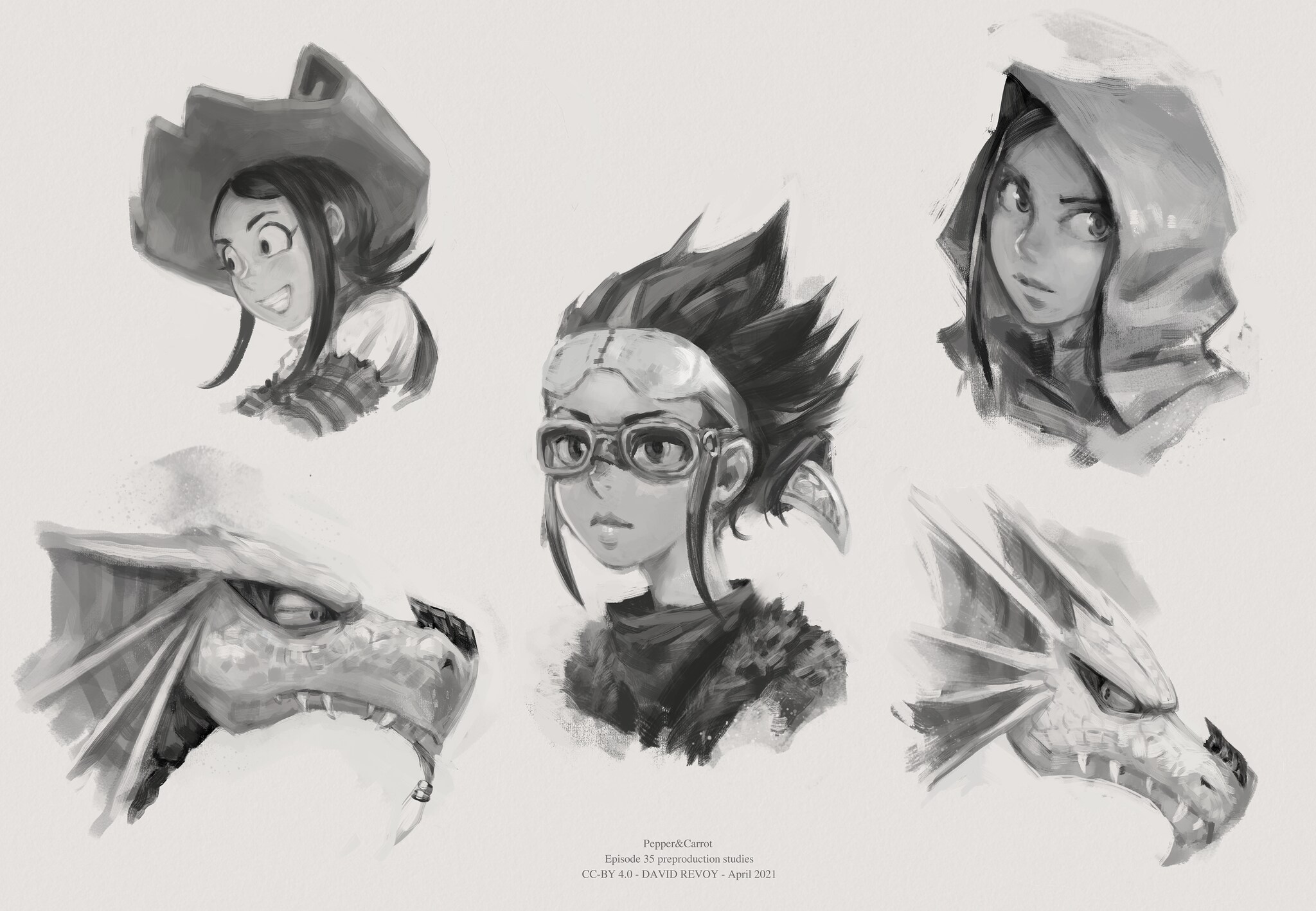 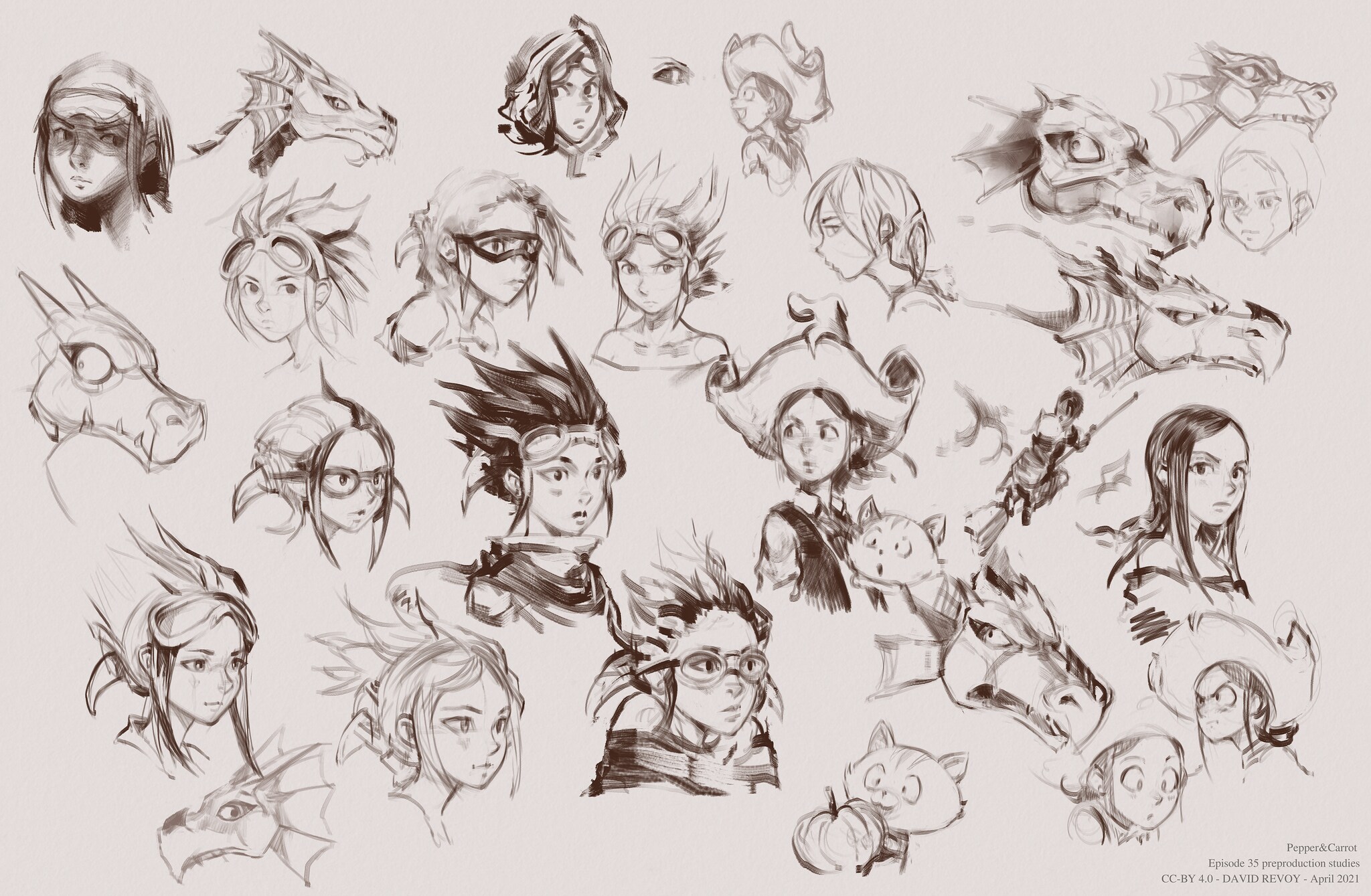 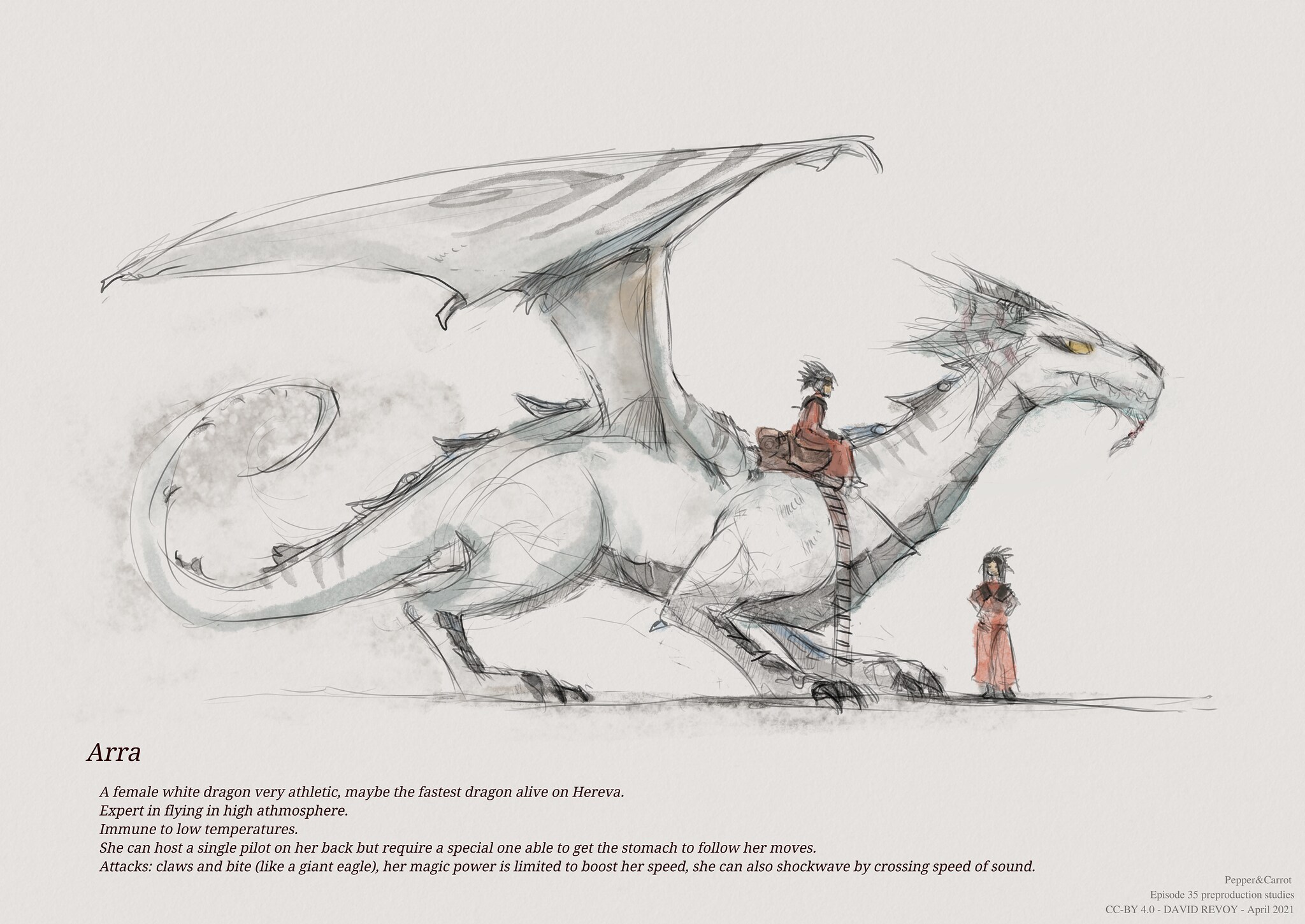 Text on the picture above:
Arra, a female white dragon very athletic, maybe the fastest dragon alive on Hereva. Expert in flying in high athmosphere. Immune to low temperatures. She can host a single pilot on her back but require a special one able to get the stomach to follow her moves. Attacks: claws and bite (like a giant eagle), her magic power is limited to boost her speed, she can also shockwave by crossing speed of sound. 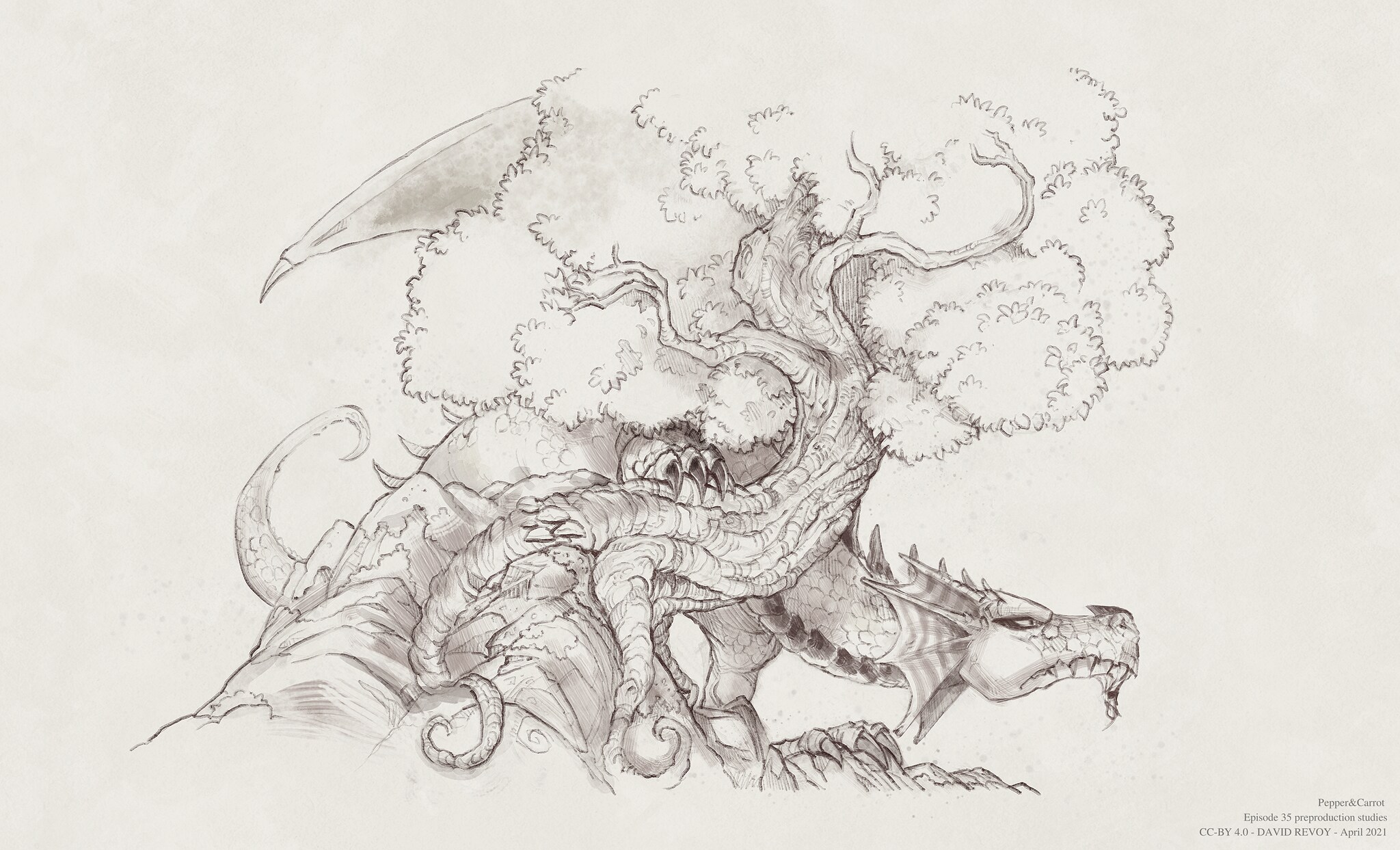 About my progress: my big single file storyboard is done and I'll start today to cut it into pages; 10 Krita documents ( for artworks and panels) and also retype all speechbubbles in 10 Inkscape documents and translate it on the fly from French to English (Beta-Reader team will improve the dialog later). Once this part done; I'll try to make a first pass in black and white over all the episode.

It will take weeks until I reach the 'Beta-Ready for translation' and with a mountain of todo on my back: emails, maintainance, tax administration, translation system, renderfarm, accessibility, tutorials, documentation, conferences and many other technical issues: I'll have to make priorities. For now, I decided I'll center all my effort around the future episode, and a production of useful bonuses for my patrons (new video tutorials/conferences/brushes).

Next post
License: CC BY
David Revoy, www.davidrevoy.com, 14 april 2021.
Unless otherwise mentioned in the article.

Thank you to share your sketches and put effort in the bonuses :-) ! Looking forward to it <3

Thank you Châu !
Yes, I'll try to give this dragon a pose (inspired by how eagles fall on their prey, folding wings) while entering in full speed. It might be on a single shot, in background; but it will give −I hope− the feeling.

One idea for cool background, is pink, orange, yellow tall storm clouds during sunrise after travel long distance. Can also make dragon poster (if have time).

From what I understand from ep34, Pepper is traveling at hyperspeed. So for the dragon to catch her, she'd have to travel hypersonic too (Ma > 5). It would take another episode for us to learn, but I see a visual representation of a shockwave around Pepper (though it shouldn't converge in a tail) but I see nothing around the dragon, so maybe the dragon is traveling considerably slower? Who knows, I know little about magic. Either way, you're right. If the dragon is at least traveling supersonic, it can indeed attack without being heard by the prey.

Either way, I trust they'll meet and just be friends. More than once, Pepper has proven to get along just fine with dragons (ep3, ep14)

Thanks for thinking about it; here I thought the "hyperspeed" of Pepper could be a little bit under Ma1; around 1000km/h ; a speed that allows her to join the land of Ah in around 3h (something she would do as a long trip of 9h with usual broom speed; 250 to 300km/h). About the dragon, I plan to make her follows Pepper without much efforts, and be able to go above Ma1 for hunting. I'll post soon a color study about the first panel; I have a glowing light of magic around the wings of the dragon (a sort of hyperspeed, no need to flap wings) and a little shield of air compression in front of her nose. That's probably something I should add to episode 34 too for continuity (soft glow around wings especially).

About the hypothesis of them being all friend; I'll disapoint but I'll put Pepper deeper into troubles. A time will come for Pepper to get funnier again. Meanwhile, I promise an epic chase and I'll do my best to release it in May ^__^

Ah, bummer. One thing I admire about Pepper is her relentless quest for positivity and friendship (much to the horror of her Chaosah masters as well as her first employer, the warlord). The artworks you released prior to Ep35 depict a more mellow vibe, so I trust things will settle down eventually.

As for the speed of sound, it is actually sqrt(gamma*R*T) where T is the temperature in Kelvin. In Earth atmosphere, R is 297 and as most molecules in our atmosphere consist of two atoms (nitrogen, oxigen, hydrogen etc), gamma is sqrt(2) = approx 1.4. So at sea level (t=20degC so T=293K) we get a speed of sound of about 350m/s. Which is a good bit over 1000km/h but over a curved body the flow has to make a detour so it will break the sound barrier in some areas. This is what we call the transsonic region. You'll be traveling supersonic when the flow is supersonic entirelhy. When flying at higher altitudes, the temperature drops (until 11km beyond which temperature remains constant until 20km) so you'll actually encounter Mach effects at lower absolute speeds. So that might work in favor of Pepper and Carrot. If the dragon has a knack for flighing high and supersonic, Pepper may still be faster flying lower and subsonic.

There is so much we can learn from each other :).