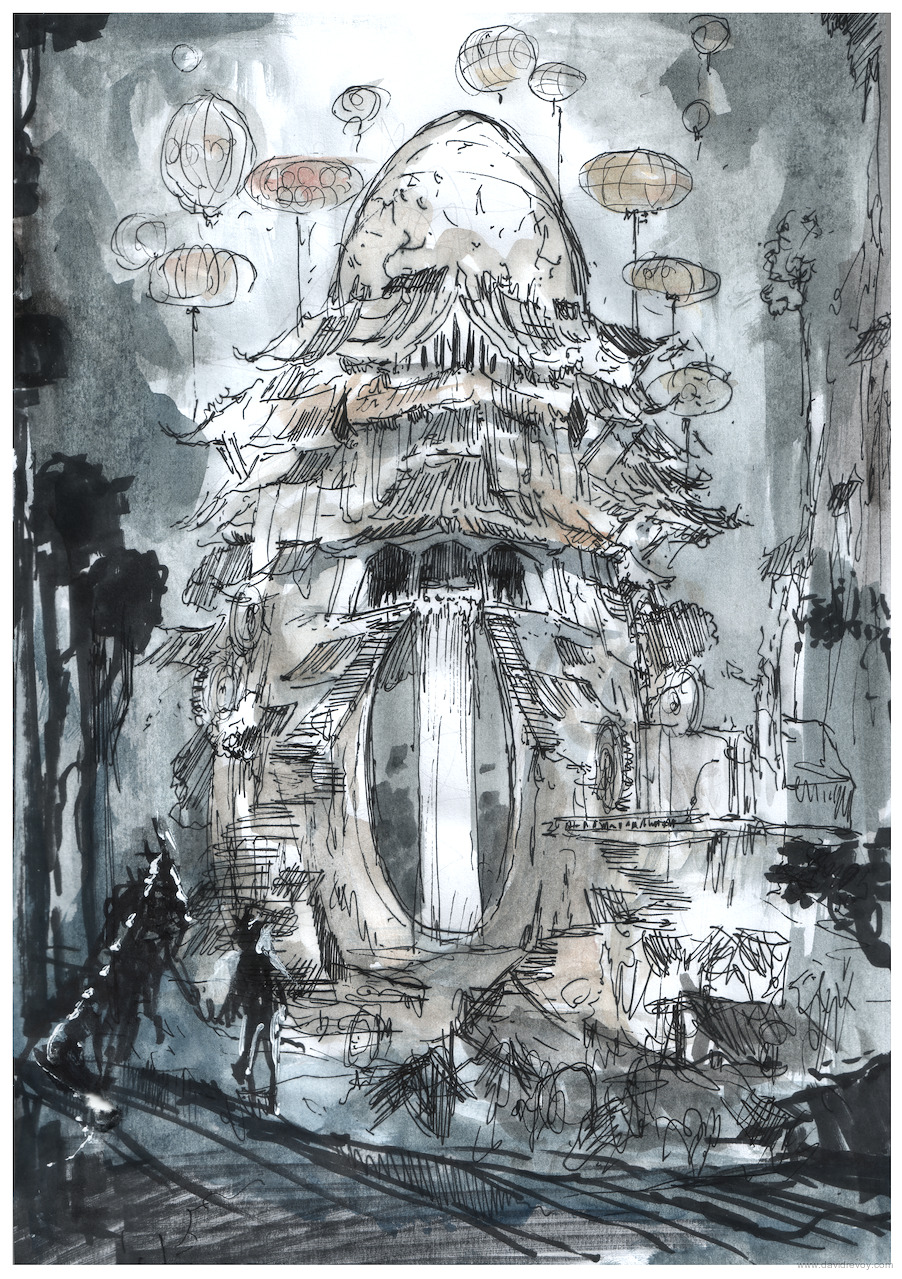 This week I've been enjoying taking time to do research for one of personal project named Astral-0. I mainly wrote and setup the universe, main storyline and setup the art-direction. Astral-0 takes place between two worlds, our reality and another dimension filled with demons and damned soul... The universe is 'fantasy gothic' and the main character (under, top left) is named Nitten and protect his clients... In short and to pitch it quickly, my main idea behind 'A0' is a sort of cross over between City Hunter and Constantine.

I started to sketch the design I had in mind for the main characters, the demons, but I'm not fully satisfied with the visual I share today. I'm still far at having a good drawing style to get into this world. But I thought it could help me to show a bit of my progress on my blog instead of hiding everything. I hope the next artworks I'll do on the topic will capture a little bit more the universe I have in mind. 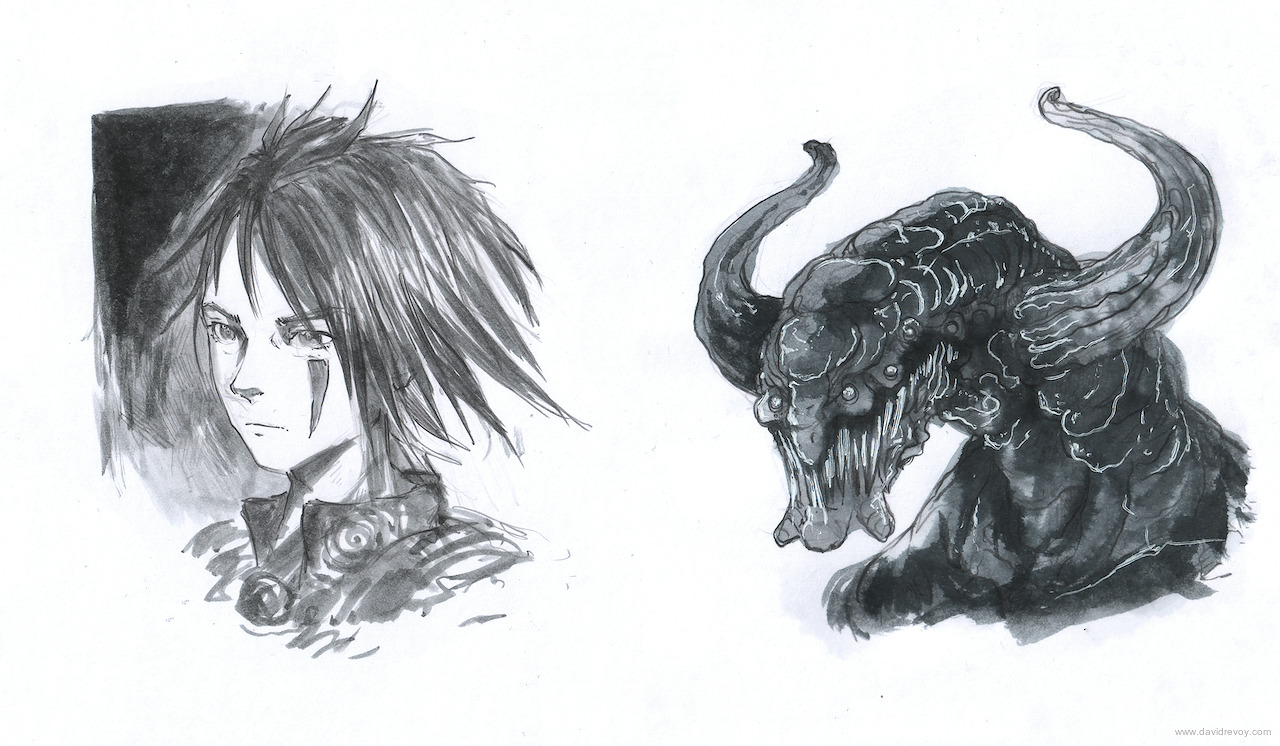 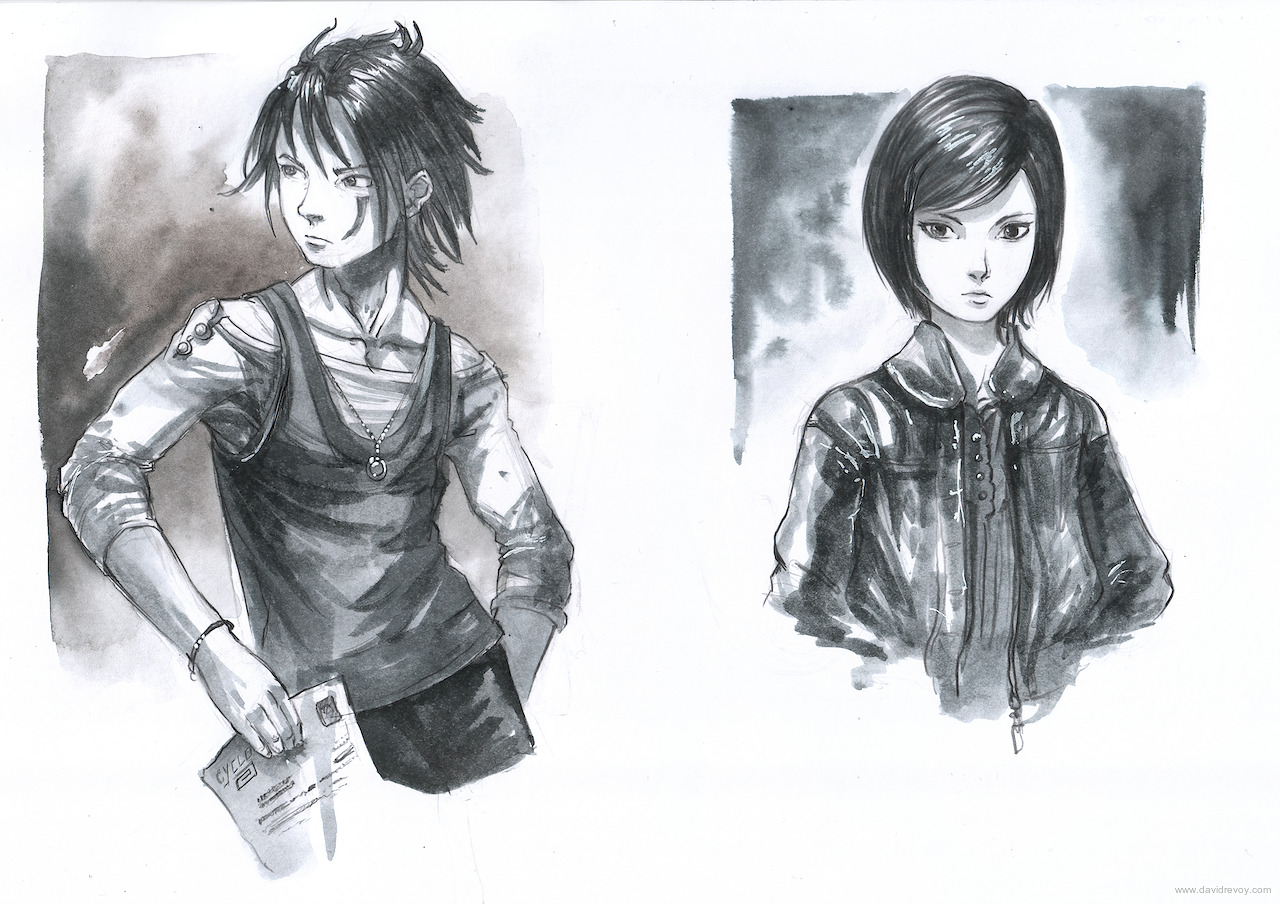 And here is a little montage of the tool I used during this preproduction period: 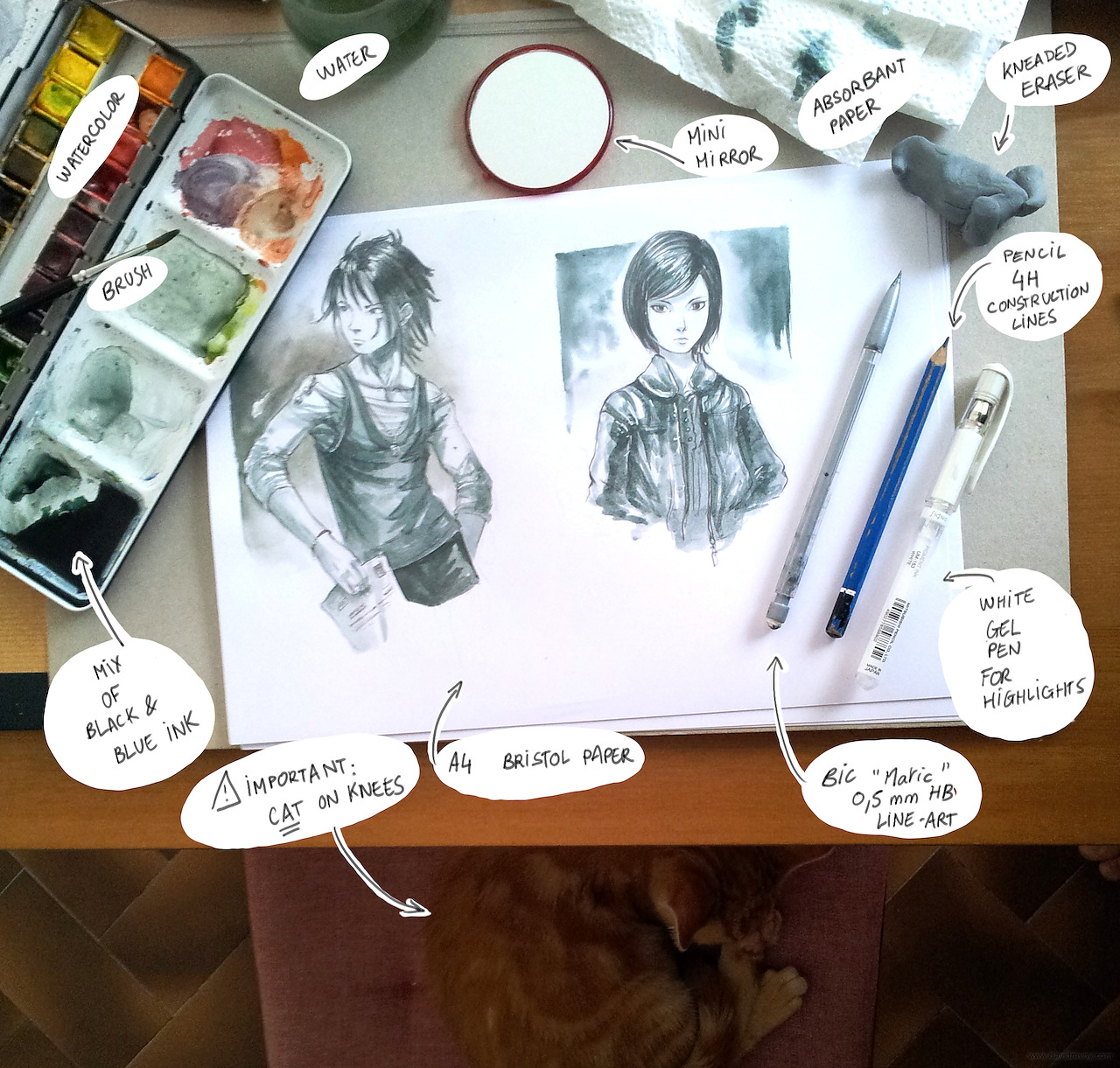 Next post
License: CC BY
David Revoy, www.davidrevoy.com, 2 november 2013.
Unless otherwise mentioned in the article.

Ahh a cat :)
I love storytelling - pen & paper rpg is my biggest hobby beside painting therefor making a comic is something like getting the best from both - storytelling and painting^^ Overlapping realities or dimensions always have been one of my favorite elements of storytelling. There are so much possibilities to develop a cool plot and hidden clues. Now from the painting side i could imagine to use two different color palettes to emphasize the feeling of different dimensions. i guess sometime i will try creating a comic too, but for now i have to learn to much different things to focus on one big project. From the characters you revealed i like the guy with the mustache the most. He is kind of suspicious.. maybe he is a good guy, but he looks like there is something like a dark hidden secret behind him. Ah man you have caught my imagination right now..

David, can you please tell me : what's the mirror for ?

Oh! paper painting!
Dip pen do not want to try next?

@Odd : ( about mirror ) The mirror helps me to see parts of my drawing mirrored ; It is a technique. When your mind focus too long on a picture, brain tend to auto-correct the drawing ( even if it looks bad, you feel it looks good ). When flipping the image while drawing with a mirror ( or 'M' key usually in digital painting apps ), you trick your brain ; this one believe watching a new image from scratch, and can't auto-correct on the top for 5 or 10 second. During this short time, you can see all your mistakes. This is cruel, but helps.

@Senlin : I like dip pen, I imported one and nib from Japan , as well as ink to try the best quality possible. The strokes are really nervous, can be damn thin and expressive. But I tend to always get back to pencil only ; I think I like the grey variation and smoothness in it. I read your page also ( http://manhuastudio.blog.163.com/blog/static/784785201310123813176/ ) impressive work with Gimp , Azdrawing and Blender.

@kot-barbos & @jules leroux : Yep, the cat is the secret weapon of artist, but shhhhhhhhh , thats a secret.

@Vasco : My cat , 'Nuty' is really young ; he has 3 month only ^___^ , I must thank you because your photo on G+ with your desk and your cat was a good inspiration to adopt mine. Thanks for your comment on the story.
For the moment, I 'm digging documentation ; and their is 2 things I learned :
- Real books about exorcism are damn scary
- I should append in my story also a lot of 'fantasy' because this part of my work keep come back compulsively.
Thx for the comment !

Do you also have a Ctrl+Z while painting on paper ? I'd greatly be interested lol... I understand the utility of mirroring an image, but in fact my question was focused on the "mini mirror" that you have on your desk. Do you use it to draw part of yourself, as hands from another point of view for example ?

@Odd : :-) Ctrl+Z would be indeed really nice sometime while inking. For the mirror, I use it only to see my drawing mirrored as I explained. Mainly about the faces of my character. Sometime ( but very rarely ) I use it to check a facial expression too by watching myself mimicing the expression. But I'm not a top actor ; my 'inner' expression on imagination are most of the time more efficient than what my face can perform :)

Cool, i am pleased to read that. My cat (Momo) found me, while i visited the local anmial shelter and i guess she had a hard time before.. therefore she will never trust me like a young cat would do. But it's okay - it grows by time :)

About the excorcism books - good idea. When thinking about fantasy, horror or sci-fi themes, we easily forget that reality often beats, what we are able to imagine. Maybe, because of the rationality of the times we are living in.